So I’m sitting at home on my day off from college, nothing to do. Staring at the ceiling, I listen out for the papery splat of the post hitting my inside doormat. My next ordeal is due and I can’t wait to get into it. So the post comes and out of the envelope I pull Conker: Live and Reloaded, a game I’ve been wanting to play for years. It’s an Xbox update-come-re-envisioning of an N64 ‘gaming nasty’, Conkers Bad Fur Day by Rare. I’ve never been bothered enough to hunt for it in the bargain bins and retro sections of game shops; I’ve just had a curious interest in this apparently adult game about an alcoholic squirrel or something. If that premise sounds a little contrived, that’s because it is. Let me explain…

What the f**k?!?
The plot in Conker: Live and Reloaded is so convoluted and strained it’s like a primary school kid has written it. You know the one; he swears because his dad does and he thinks it makes him manly and cool. In actual fact, it makes him sound all the more thick and Conker suffers from this odd eventuality for its entire duration. Profanity seems to be used as an excuse for bad writing, either through inexperience or just plain bloody mindedness.

At no time does the swearing have context; there’s never any event that truly warrants an F-bomb. Coarse words are dropped in seemingly at random, giving Conker the impression that it’s really trying very, very, very hard to be shocking and adult. Which, as anyone who enjoys adult entertainment will tell you, is not the way to do it. Swearing can be very funny and also very apparent, if used within context. Even when it strays a little far from the contextual tree, it can work if it’s done well. Overuse, however, makes the dialogue heavy and difficult to swallow, like a cake that’s too dense. This dead weight most frequently comes from our title character, Conker the Squirrel. 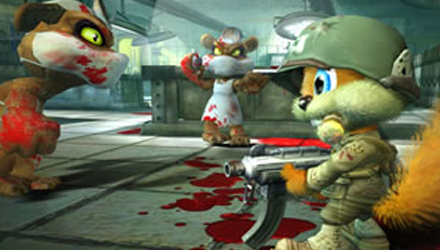 Who gave him the gun?!

Conker is a dizzying mix of a cute(ish) squirrel, Boris Johnson and the drunk at the pub who gets talking to you despite the fact you have no interest in how many people he’s mugged. His accent flits between English and American for no reason and he sounds like he has a peg on his nose.  Not a very likeable lad, I found myself hammering the A button, vehemently trying to skip his badly written monologues. To no avail I might add. This is one of my chief bugbears with games; the inability to skip cut-scenes.

In something like Modern Warfare 2 or Mass Effect, the cut-scenes drive a thrilling and enthralling story and skipping them amounts to sacrilege in my books. When said story is an intoxicated stumble through the life and times of probably the most unlikable character I’ve ever had to play, not letting you skip the cut-scenes is as bad if not worse. This is just a minor tear though, in a game so full of rips and holes you could sieve flour through it.

Worst. Controls. Ever.
The first gameplay thing I noticed was how loose and flimsy the controls are. Jumping is shockingly bad and you’re never quite sure how far you’re going to go or where you’re going to land. In a game choc full of platforms and pitfalls, this is a game breaker. Every two seconds a cut-scene muscles its way in, making a point of something that’s either blatantly obvious to anyone who’s ever picked up a controller or so inane and boring you couldn’t care less. The camera is a classic old-style fare; it’s a bastard to control and is never where you want it to be. I find myself jabbing at the Right Stick, constantly trying to keep the camera in a place where it should have been doing its job.

The combat is astoundingly terrible, as are the controls for it. RT is your crouch button right? Unless you press B to get out a weapon, then it’s your fire button. So you can’t crouch and fire at the same time and half the time an attempt to down an enemy will result in a suicidal crouch. Considering there are at least two free buttons, adding a separate crouch was completely possible but obviously too much effort. Considering Rare added wry references to the fact that this is a remake throughout the entire opening section, updated the graphics (apparently) and censored everything, coding an extra button was obviously too logical a step. 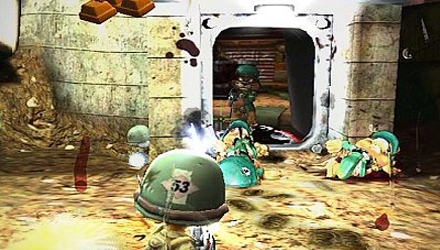 The censoring issue is probably the final nail in the coffin of this aging waste of time. The chief attraction of the original was its blatant disregard for Nintendo convention and willingness to push the boundaries of what N64 owners would accept. Even Goldeneye was a bloodless affair, despite the abundance of firearms, conforming to the Nintendo remit of muted violence and family-friendly gaming. Conkers Bad Fur Day, as a game, was nothing special; a third-rate action platformer.

The profanity and adult content made it unique and special, if not making it any better a game. Removing all of this and replacing it with rage-inducing bleeps is akin to listening to a censored Eminem record; something very integral to the inner workings of the piece is missing. In the case of Eminem, his lyrics are smart and in most cases still carry, but as Conker used bad language as a crutch it falls flat on its face without it.

I’ll make my excuses here…
As the more observant of you have probably already realised, I’ve neglected to write much about the story. That’s because I didn’t finish the game. In fact, I barely got past the opening chapter. This is not down to laziness or lack of time. It is simply because I couldn’t stand to play this awful piece of toss through to the end. It gave me no incentive to play even past the first five minutes, and I think anyone who’s managed to complete it should get a medal of some sort. My breaking point came when I had to trick a talking pitchfork into stabbing bouncing piles of hay instead of me.

The shocking camera, the awkward movement controls and the bizarre randomness of the pitchforks attacks made it practically impossible to succeed. By the time only the smaller hay piles remain, it feels like trying to get a very small target with one eye closed and both hands tied behind your back. More difficult than it should be, basically. I feel no shame about dropping this dead weight early on; my mission here is to find out if it’s worth playing.

As I’m sure you’ve gathered by now, this is no place to find gold. Conker should have stayed on the N64, where his foul mouth and squiffy controls were acceptable. On Xbox, it’s just not good enough. With so many better older games to sample, there’s almost no reason to play this astoundingly bad game. Unless, of course, you like listening to heavily censored hip-hop while trying to avoid a pack of rabid dogs, blindfolded, fighting the urge to repeatedly bang your head against a particularly rough wall.

Another failure then. Tune in next week when I’ll be battling with Star Wars: Republic Commando!