I was only born 21 years ago, so I never experienced the original Gauntlet when it came out. I have played it on NES though, and I have to say I wasn’t amazed. The concept is very simple; pick a character, walk around increasingly tough little dungeons killing legions of monsters and stuff. It’s fun and easy to play, but requires skill and cunning to master. I didn’t spend more than a few minutes with it (I get bored quickly) but I enjoyed it. So when Gauntlet: Seven Sorrows, I believe the final update to Midway’s series on Xbox, came through I was curious and just a little excited. For good reason? Let’s see…

Once upon a time, four great heroes, blah, blah, blah…
Right out with this one; the story is shit. It barely exists and is told in post-level montages of hand drawn parchments and narrated by some Z-list, wooden actor. I listened to each one and still had no real idea what was going on, other than these heroes needed to go somewhere and kill something. Which is actually a pretty good way to describe the game. While previous instalments of the updated series allowed you to customise your character, in Seven Sorrows you have to pick between four set heroes. A big dude with an axe, a wimpy mage, a slender elf warrior and a shieldmaiden or valkyrie or whatever stupid new name they’ve come up with for a warrior woman. All of them have different special attacks but essentially fight the same. The big guy is slow, the elf is quick, the maiden has better defence and the mage is just plain crap. He can’t even do proper magic, so what’s the point? I chose the elf first time around.

Essentially, Seven Sorrows is an arena combat game. Combat moves and special attacks are crammed into the joypad so there’s practically no room for anything else. The only action that has nothing to do with combat is the ‘Use’ button, which is handy for opening chests and doors. Each attack has its own purpose, but it quickly becomes clear that the system is overcomplicated. There’s a specific button for guard-breaking attacks, yet most of the time just hammering the standard attack will bust a baddies guard in seconds.

There’s a rising juggle type attack, but because the enemy flies so far, you can’t actually hit them again until you level up your speed. Why give you an attack that’s useless until you level up? Then there’s the ranged attack, which has a dodgy lock-on and half the time hits the wall or some enemy you could easily slash, rather than the two bozos filling you full of razor sharp arrows. The Right Stick is an odd one; it’s a dodge thing (think God of War) but it does damage. I went through a whole level just using the Right Stick and it actually worked pretty well. Bizarre. Oh, and the unique character attacks are on the D-pad of all places. Who’s going to take their thumb off the movement stick to press a direction to do an attack? I know I didn’t; half the time your enemy’s gone before the attack executes anyway. 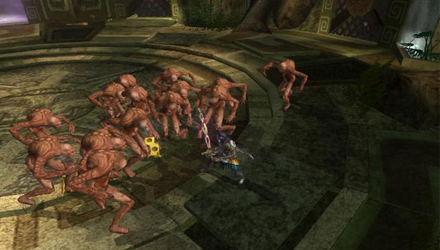 Gerald was prepared to fight tooth and nail for the last piece of Swiss cheese...

Despite all these put-downs, Seven Sorrows is actually pretty good. It looks really nice for one thing. The likes of Oblivion and Gears far overtake it in the graphics department, but for an Xbox game it looks lovely. The characters move well too, no jerky movements or glitches. The frame rate holds regardless of the amount of foes on screen and the attacks and magic (what little there is) look pretty cool. There are a few neat gameplay touches, like having pots of hot lava you can knock over and Death himself popping out of random chests, only able to be downed by a Mana Blast or something. Overall though, it’s a pretty standard arena combat type thing. That is, except for a few glaring missteps, one of which totally ruined the game for me.

The generator game
After about half an hour with the game, I realised something. Every group of enemies comes from a generator. Some look like gravestones, others like little volcanoes. Until you destroy the generator, enemies will keep on coming. Fair enough. However, when you realise that that’s it… well I put the pad down and had a little moment of disbelief. They should call it Gauntlet: Destroy the Generators because that’s literally all you do. Aside from opening a few doors, every level goes something like this: Start, kill things, destroy generators, get a bit lost because there’s no mini-map and everything looks the same, kill more things, destroy generators, kill some more, get hurt, kill more things, destroy generators, get to boss, die in two hits, respawn, rinse and repeat until you run out of lives and have to start the level over. 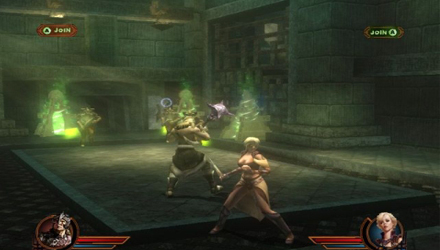 In the world of Gauntlet, a domestic usually ends in serious injury or death...

Yes, you read right. The bosses are the other misstep and a monumental one at that. I think everyone will agree, there’s nothing like a good boss. Balanced boss battles make games, my personal favourites being the ones that force you to use a unique and original strategy to survive. Seven Sorrows ruins the boss battle in about thirty seconds. The first boss can kill you in three hits, the second boss in two. I never reached the third boss. They have attacks that set you up for a death blow and there’s nothing you can do. In addition, Midway decided to send enemies after you too. So let’s recap; boss with lethal moves, enemies, and five lives. Oh, the game gives you lives. What game still does that? You can die five times and respawn instantly at the nearest checkpoint, but it doesn’t matter for the bosses. Those lives can go in a minute if you’re unlucky.

The first boss was solid, one of the hardest I’ve fought in a long while. Every single one of his attacks knocked me over, and three in a row kill me outright. So I stay away, shoot him with arrows, and I still manage to die three times. Fair enough, tough boss. The second boss, however, is impossible. Two hits, you’re dead. There are four generators littered around the area, but try to destroy them and you’re screwed. The boss just stomps over and kills you. So, I have to fight a super powered boss surrounded by waves of enemies? Then he sucks me in with a tornado thing, from the other side of the area, and kills me with a combo. At that point, I threw my pad across the room and rammed the game firmly back into its envelope.

The Verdict
Gauntlet: Seven Sorrows was never going to be amazing. When your only source material consists of killing things and finding keys, you can be expected to come out with something like this. That’s no bad thing; I enjoy a good slash ’em up as much as the next guy. Why they made the bosses so hard and reduced every level to essentially hitting rocks until they explode is beyond me. Someone in QA must have brought the point up, unless they were all stupid or just monumentally shit at their jobs. Somewhere down the line, someone at Midway decided that the bosses would be rock solid and represent probably the harshest and most unstable difficulty spike I’ve ever seen. It’s a shame really, because Seven Sorrows was so close to being pure gold. In today’s gaming society, the bosses would go down like a bad smell and the repetitive level design and lack of solid plot would put this way under the radar of many of today’s young gamers. Maybe it’s time to put the old warhorse to bed, for good.

So close but yet so far. Next time I’ll be fighting crime in Justice League Heroes!