Did you love Far Cry 3? I know plenty of people that did and from what I’ve played of it so far, it’s right up my street as well.

It looks like I’d better get a move on though, as the DLC titled ‘Blood Dragon’ is expected to be released on the 1st of May. Oh, did I say DLC? Well…

A new entry on Microsoft’s online catalogue of downloadable titles has shown up recently. Have a look at it here.

The page is for the previously announced Far Cry 3: Blood Dragon. What was originally thought to be a piece of DLC is now looking like it could be a little more substantial. The listing on the Microsoft site reads;

“Far Cry® 3 Blood Dragon is THE Kick-Ass Cyber Shooter taking place on a bizarre open-world island crawling with evil. Welcome to an 80’s VHS vision of the future. The year is 2007 and you are Sargent Rex Colt, a Mark IV Cyber Commando who’s fighting against a cyborg army gone rogue. Your mission: get the girl, kill the baddies, and save the world. Experience every cliché of a VHS era vision of a nuclear future, where cyborgs, blood dragons, mutants, and Michael Biehn (Terminator, Aliens, Navy Seals) collide. Playing Far Cry® 3 Blood Dragon doesn’t require a copy of Far Cry® 3.“ 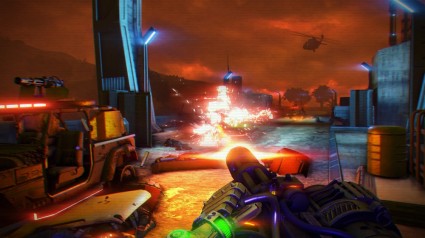 Since when is 2007 ideal for a ‘retro’ setting? Making me feel old here…

It seems that to get yourself some neon-filled shooting action, you won’t have to own Far Cry 3. Whilst some might be disappointed in the fact that this isn’t your ‘traditional’ DLC, it makes me hopeful that making Blood Dragon its own thing could mean it’s a fairly sizeable offering. I’m thinking along the lines of Dead Rising 2: Case Zero. 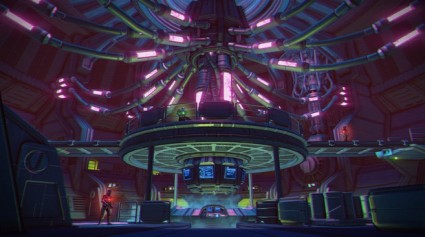 Not convinced by the screenshots? Go check out the SoundCloud page which has a bunch of audio from the game’s soundtrack. It seems that Ubisoft have ‘Power Glove’ doing some of the music. Don’t ask me who or what they are, all I know is that it’s good but not as good as Hotline Miami’s soundtrack. But what is?