MMOs are set to steal your very soul. Not even just your soul, the essence that makes up that soul, which they will then process and turn into money and laugh, whilst sitting on big chairs and mocking you.

At least that’s what many people seem to believe MMOs, or more specifically World of Warcraft, is set out to do. To a degree, they’re right. MMOs aren’t your fancy, hold-your-hand games. They focus on turning your time spent into profitable game benefits. If you want to bear fruits in an MMO, you have to be ready to sacrifice a lot of time, sweat, blood and tears, and possibly family.

One game that may shake things up a bit, is Guild Wars 2.

In a nutshell, Guild Wars 2 could pass as being another soul sucking, life-draining game that turns its fan base into mindless Zombies. However, after having experienced some time with the game, my opinion on it rapidly changed into a mixture of curiosity and awe.

First off, the game has a unique style, which can be noted from the very first log-in screen. Its distinct art and inimitable manner allows for an instant connection. It doesn’t attempt to pull you in with large dragons, epic explosions and manly weapon swinging. Guild Wars 2 takes the subtle, elegant approach, and it works nicely. 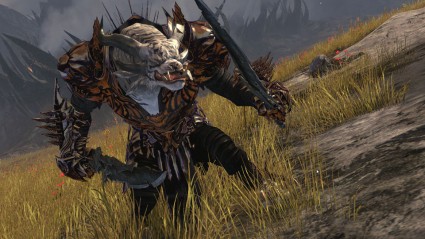 Creating a character further plays on the artistic style, choosing your race from a portrait of each one standing side by side, however much of the character customisation was unavailable. I’m sure it will be deep, but perhaps not as deep as Skyrim’s choice of dirt colour. It’s all about creating a unique character in a world full of like-minded basement dwellers, right?

After a short (yes stunningly beautiful) cut-scene of my chosen race’s history, we set off in Guild Wars 2’s beautiful world. Granted, a bit of MMO knowledge was needed to start straight off the bat, however being a WoW player, I knew exactly what to do. Optimizing my Azura’s skill bar was a breeze as I found the buttons welcoming.

The game definitely feels from the moment you step foot into it that every precise step had a lot of care. The landscapes were amazing, the beautiful world making me forget I actually had an audience of ten or so people watching my every move.

While Guild Wars 2 provides the usual MMO feel, the differences are immediate. Guild Wars 2 focusses on its character line, giving each individual a story based on questions asked during the characters creation, taking small things into consideration, such as if you answered the questions forcefully, NPC’s will react accordingly to your characters traits.

The unique approach is something that I felt on my first playthrough, which speaks volumes for the possibility of replaying the game with different race/class combinations, something that other MMO’s suggest you do, yet allow for an identical experience that makes the process tedious.

However, Guild Wars 2 differs through its quests as well. On top of collecting them from various NPC’s, world events are constantly taking place. Upon entering a new area, your character will be thrown into whatever battle or situation is currently going on, helping out wherever he or she can. Once you’ve done your bit, the area will change according to whether you managed to succeed or fail. For example, you may push further into enemy territory, or you may have to retreat to a safer haven if you didn’t finish your quest in time, or correctly.

This simple technique allows for a truly developing world that draws you in like no other MMO. No longer is the world static, you have to get ready to change with it, just like (dare I say it) the real world.

Guild wars continues with beautiful features such as an extensive talent system which allows near perfect optimisation for what you want to play, a beautiful map that allows you to see exactly what’s happening in the places you’ve visited to see if you want to go and help out. When you do decide to arrive at a place, the zone will give you quests focussed at your level. However this is only to a certain extent. Don’t walk from your starting zone to that big boss’ castle expecting to be asked to collect some tree branches. You’ll get your ass handed to you… through your mouth. 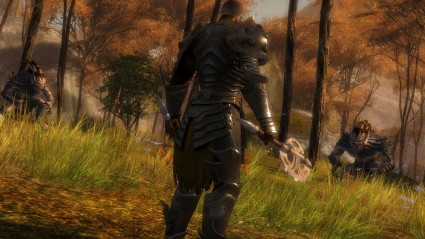 Whilst I find it hard to find fault in the time I had with Guild Wars 2, the plusses could be its downfall. The work behind Guild Wars 2 has obviously taken time and precious dedication, however it differs a lot from the original game and its expansions.

It’s obvious this game is aiming to take on some of the big time contenders on the market at the moment, but the magic of Guild Wars was that it was a game of its own, with its own NPC part creation options and things that made it stand out.

Guild Wars 2 on the other hand is a transition to the mainstream style with one or two slight differences. So while it is definitely going to be one of the best in its genre, something tells me long fans of the series won’t be happy to see the game drop what made it stand out to cater to a larger audience.

That being said, the game may well balance between the two fan bases and create some sort of ‘super fan-base’, with a mixture of lore loving veterans and MMO enthusiasts that will get along harmoniously.

No? Well, it’s no harm to hope, right? Either way, Guild Wars 2 will shake the MMO scene up, offering a full-blown MMO experience at an affordable price. I’m more than interested to see how the competition reacts once this title hits the shelves.