It’s still something that I’m trying to get my head around. The two don’t sound right next to each other, Nintendo and Metal Gear Solid, like some sort of warped oxymoron. However the series has found its way onto the 3DS console for a handheld exclusive, with Metal Gear Solid 3D: Snake Eater, a 3D port of the Metal Gear Solid 3 game. Nintendo haven’t been ones to fail when it comes to pulling some tricks out of the hate.

Handhelds and the Metal Gear series have been interesting. If we cast your minds back to 2004 when Metal Gear Acid was released for the PSP which gave an interesting turn-based element to the tactical gameplay we were used to; it worked well, and was fashioned specifically for the device.

For the 3DS, however, Kojima has taken a stab at bringing the original mechanics straight to the console. It seems that the original sample that was supposed to simply show audiences what the 3DS was capable of is being released as a fully fledged game.

Starting the demo, the game blasts you with a screen of tiny text displaying various complicated controls for approximately a full five seconds before landing your straight into a forest terrain.

Immediately, and unfortunately, it’s aware that the 3DS isn’t completely up to the challenge of bringing the Tactical Espionage Action to our hands. The forest that we find ourselves in blends with each other far too well, displaying a rather poor colour palette range. Mixed with the limited graphical prowess that the 3DS has, MGS:3D looks sub-par compared to the likes of Mario Kart 7, Super Mario 3D Land and Resident Evil: Revelations. It’s odd for a game originally designed to show what the handheld was capable of.

The experience unfortunately got worse. Attempting to traverse the minute shades of green proves hard as the controls, which I was still alien to, are complicated and sluggish. Making my way through the area obviously designed to allow me to get accustomed to the controls was a nightmare. I couldn’t find any sort of run button, which meant I was stuck doing a half-jog, half-shuffle through the forest.

Moving into the next area made me suspicious that the game may suffer from Monster Hunter Tri syndrome. A loading screen, which allowed me a second chance at checking the control, gave me a feeling I was going to get accustomed to this screen, which is probably why I didn’t get to analyse it too much more before finding myself in a different part of the forest. 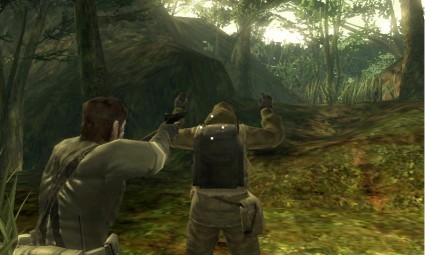 My first combat experience was found in this new area, where a few soldiers bore down on me rather quickly. Not alien to this scenario, I attempted to swing Snake into action, only to find the camera controls through the A, B, X and Y buttons to be as frustrating as everything else. A slow camera movement up and down gives little to no time to quickly dispose of enemies without sitting behind cover for a few minutes adjusting the camera.

This completely kills the action aspect of the game. The fast paced thrill that Metal Gear is famous for bringing is destroyed, replacement with gimmicky camera movements and slow combat.

Upon several more forest areas, which included some swamp action where Snake waded through some mud (the only thing to break up the monotony) until I was asked to move on to allow some other people to feel the cold steel of disappointment.

Unfortunately, this leads to the entire demo being a sort of shame, especially to a fan of the series. It’s no secret the game was never planned, just a sort of Easter egg for Nintendo fans, which makes it glaringly obvious that making it a fully-fledged game was a complete afterthought.  As such, the game hasn’t had the time and care it deserved to be a decent entry into the franchise.

The kicks in the teeth keep coming, though. What makes the entire scenario worse is that the peripheral to include an extra thumb-stick and some shoulder buttons to the 3DS will be this game’s saving grace. However the game’s original intention was to show that the 3DS was capable of running the game without flaw. The extra bolt on helping this game is a huge blow to the developers. The ordeal will be a lot more bearable, the only downside being its graphical issues, which are always to be expected from a Nintendo console.

Whilst it’s exciting to see Metal Gear make its way to our 3DS, it needed more time. The 3D port isn’t enough to bring the full package to the table, and as such, lets the series, and the game as a whole, down.

If Kojima wants to break into the 3DS market, then time needs to be spent on a game that has been designed specifically for the 3DS, and everything the console can bring to the table. Using the 3DS’ selling points, such as the AR, 3D and touch-screen is what Metal Gear needs to take advantage of, not just hoping the past glory will continue on.

Until then, I think the best Snake experience on the Nintendo side of the ocean will be his appearance in Brawl.