I love that video-games have come to a point where a launch party for a game is absolutely fine. I remember when gamers avoided outside, crowded areas as much as possible, let alone purposefully put themselves in such a position.

However that’s exactly what happened on Monday night, as a few hundred people turned up at Old Billingsgate Market in London to celebrate the launch of Call of Duty: Modern Warfare 3, and it’s not like they tried to keep it quiet.

Upon arriving, the venue was lit up bright green with the game title and small animations been projected onto the side of the building, as well as the HMS Belfast, which is moored on the Thames and was decorated in the same fashion.

A quick queue, list check (with no problems, despite some last-minute changes, kudos) and a black wristband later, and I was walking down the camouflage carpet. Paps added to the lighting with camera flashes and intense lighting, making me feel both special and awkward at the same time.

Arriving inside the venue was a different matter, however. Two rows of staff with trays of free drinks lined the walls as we walked in to a huge room complete with small and large TV screens, the former playing host to single-player Survival and the larger screens paired together, allowing for two player Survival. Nothing too out of the bag, as Activision have been offering this game play for a few months at events such as GAMEfest and the Eurogamer Expo.

An interesting addition was a large round table with twelve stations that allowed players to sit and play an online Free for All game against the others at the table. While usually, the table was occupied by casual gamers, there was a moment where a few experts (whether professional or not is still a mystery) took to the stations, easily eliminating the others, and really playing against themselves.

After a scope of the areas (which included a VIP, and either ‘very important’ has lost its meaning or I’m completely out the loop. Probably the latter.) some Modern Warfare 3 team members took to  the mini-stage to explain to us what Modern Warfare 3 had to offer. The whole section seemed a bit redundant, as we were having information explained to us which not only had we been told months before, such as what playable modes are available, but also were about to be released in less than four hours to the entire public. On top of everything, they showed the live action ‘Pro and Noob’ video, as well as a video explaining the Elite service.

Once we’d heard what we already knew, Britain’s number one CoD player took the controller on a large screen inset in the wall to show us a match against him and several other ‘number ones’ around Europe. The match was a 5-on-5 free for all, in which our Brit representative took a while before getting into the swing of things, dying twice before taking and keeping the lead, winning with 7 kills.

Cheers from the crowd followed him off, as Joey Barton, footballer from QPR, took his place to represent Britain in the Celebrity European Tournament. A quick show of who he was playing against (a list of people no one knew anything about) was followed by a technical failure, in which Barton had a moment to quickly ram in some last-minute practice whilst they re-established the connection.

Barton performed… averagely, finishing 3rd after displaying some camping tactics, which didn’t go down well with the crowd watching. Then before leaving the stage, managed to make a dig at the party planners for inviting the cast of The Only Way Is Essex, which I can only assume was fuelled by his game performance… or the free booze. I’ll let you decide.

A few drinks and a game of Survival with my plus-one later and Example explosively took to the stage, with little warning. A curtain dropped on a previously covered area which unveiled a full band and fireworks. Not needing an introduction, Example went straight into his set, allowing a previously drinks and chat area to turn into a fully fledged dance floor. 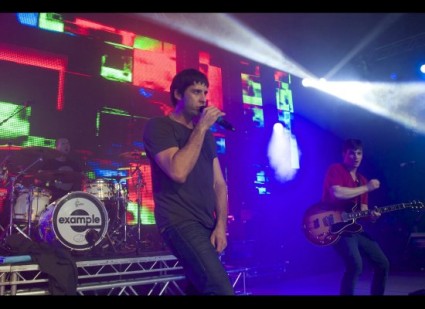 I wanted to be sceptical of the musical acts, a first glance at the line up had a smirk on my face, however the joke was on me as Example worked the crowd and got an uninterested crowd more focussed on gaming on their feet and dancing. It was definitely a perfect act for the event.

As such, Example was a hard act to follow. After what can only be described as a completely unneeded stage change, Chase and Status occupied the space where Example had just stood. I’ll admit it now, I haven’t known or heard much of Chase and Status’ work, however what I did witness was a highly disappointing DJ set, in which one of the two played pre-existing music, whilst the other insisted on repeating set phrases such as “Give it up, Xbox!” and “What, What!” Suffice to say, I wasn’t exactly entertained, and eventually went back to the multiplayer survival section, not only to get another game in before leaving, but also so I could put the headphones on.

Chase and Status left the stage just before midnight (to the despair of a few people that had been ‘dancing’) and a round of celebratory fireworks were set off on the stage, and music was reinstate over the sound system, allowing for people to get in a few last-minute drinks and chats before leaving the venue. On the big screens, the venue showed live footage from various midnight launches with players entering stores to collect their copies of the game.

Overall, the night was a success, good drinks, good food, fantastic entertainment for the main part, as well as being waited on, Activision set a fantastic atmosphere and allowed for the entertainment to take place without trying to shove the game down our throats too much.

After feeling the vibe on Twitter and in general, it seemed that the Party wasn’t classified as that big of a deal, some mistaking it for the Midnight openings that were occurring all over the country. The truth of the matter is that the spread Activision put on wasn’t only just a fancy facade. The party shows that they trust in their game, and feel like it deserves the Hollywood treatment. Sso do the fans, who showed loyalty to the series through it.

As such, the game had a fantastic launch, party and I was honoured to be a part of it all. A rare mix of high-class and stereotypical gamers that balanced perfectly.