Real life, eh? What a drag. It’s always throwing something up at you and it’s always doing its best to get in your way of doing what you want to do. In this case, what you’re really keen on doing is finding out what happened in the world of games.

Luckily, a couple of days late, we’ve got your back. Let’s see what happened.

Did you see it? Did you see the sports? I know I did. Good, wasn’t it?

If you’re still keen on getting more sports, a couple of things to be aware of from the world of games. Firstly, for those of you that like American Football, a video’s been released showing how this year’s rookies react to their Madden player ratings. For some reason, seeing these young, athletic and extremely rich men be knocked down a peg or two warms my jealous heart.

For those of you that like football of a more wordly variety, there’s still the steady stream of videos about the new FIFA game coming out. This video talks up the emotional side of the game. I believe the entire Brazilian team have been mo-capped to get all of those authentic crying animations we’ve been waiting for.

This will most likely be a regular feature of the weekly round-up. Companies keep on disappearing.

Firstly, this has been known for a while, Neversoft have finally been swallowed up by Activision and now no longer exist. *sniff*

The only way for a company that has an eyeball with a spear through it as a logo to go out? Set said eyeball on fire and take pictures of it. Rock on Neversoft eyeball, may you kickflip forever in our hearts. 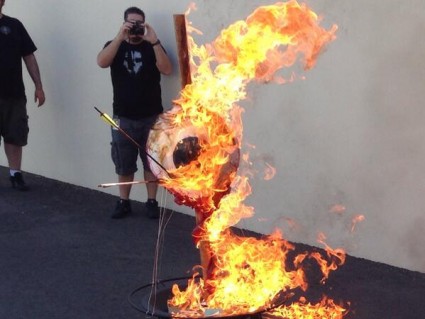 Going down in a blaze of glory…

On a slightly larger scale, Microsoft cut 18,000 jobs worldwide and as a part of this restructuring Xbox Entertainment Studios (the company set-up to develop the ‘TV’ content for Xbox) has been shuttered. The work will go on, as there are a number of shows still in development, but a number of people will be shuffled about.

Finally, I mentioned that Crytek UK was having issues and it seems that those issues continue. Homefront: The Revolution‘s director, and one of the more senior members of Crytek UK’s staff, has resigned. It’s continuing to look like Crytek UK is a ship that’s slowly sinking.

As always, thoughts to those affected by all of this. Losing your job is a real kick in the teeth.

Not All Doom & Gloom

Still, the games industry isn’t all about firing people. Sometimes there’s news of exciting new companies being created. This is one of those times.

David Goldfarb, who used to work on the Battlefield series whilst at EA and more recently has been director on Payday 2, has left Overkill Software to go and set-up his own studio.

Also, someone of interest has been given a job. Remember the name George Hotz? Perhaps you know him as Geohot? Perhaps you may recall him as being ‘That Douchebag That Brought Down PSN For Months’. 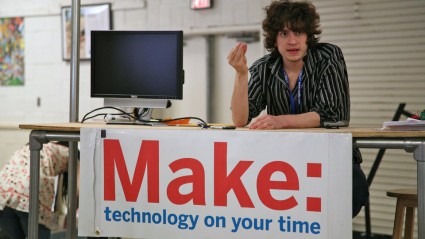 Keep this man busy. Your free-time depends on it.

Well, he’s now working for Google. Not too sure that does Google’s public image any good, but hey, anything that keeps Mr Hotz out of trouble. Idle hands and all that…

Firstly, the Smash Bros. revelation train rumbles on. I’m looking forward to the game because firstly, it looks great and secondly, I’m tired of the near constant announcements.

Grumpiness aside, here’s a video of some new Fire Emblem character s making their way into the game as well as the return of Captain Falcon. FALCON PUNCH!

Another fighting game that sort of had a new character announced was Mortal Kombat X. It’s a bit of a stretch, but Ed Boon has stated that the odds of having a ‘guest’ character appear in the game are ‘pretty good’. For a series that has had characters like Freddie Krueger and Jason Voorhees it’s kind of exciting to hear that potentially more ridiculous characters could be making an appearance.

Lastly, a new Tekken game. For those of you still waiting on Texxen X Street Fighter, I suggest you stop holding your breath and instead focus on Tekken 7. Nothing’s been shown and not much is known except for the fact it’s being made using Unreal Engine 4. So it’ll look pretty, but other than that, who knows?

Xbox One seems to be selling better now that there’s a ‘kinect-less’ version available to buy. Who would have guessed that?

Some ‘free’ games will need to be re-labelled, in Europe at least, as new policies come into affect. It basically means that something like Dungeon Keeper wouldn’t be able to call itself free, as it’s so heavily biased towards you paying out cash to keep playing.