Posh frocks and gongs: A day at the BAFTAs

Our site editor, one Mr Andy Corrigan, gave me reason for some serious excitement during this past week. He asked me the following question; “How would you like to go to the Game BAFTA awards this Friday?” I can’t repeat my exact words, as this is an upmarket website (and my parents might be reading) but suffice to say that the essence of my response was “Yes please, that sounds like a jolly good day out. Thank you, kind sir, for thinking of me.” As this was to be my first gig as a ‘reporter’ I have to say I was ridiculously nervous. Nervous and excited in equal measure. How did I get on? Who flirted with me? What were the surprises? Read on to find out more.

I spent Friday morning making all the necessary preparations for the big day ahead; you know the drill, washing and straightening my hair, giving myself a French manicure, shaving my legs… oh, and reading up on the games that were nominated that I was less familiar with so that I wouldn’t feel like either a complete nincompoop or fraud. Being the slightly skittish and pessimistic person that I am, I got to the Park Lane Hilton somewhat early. I passed the time chilling in the lobby, and I can honestly say that this is the first time that I have ever been called ‘Ma’am.’

At the allotted hour I wended my way upstairs, and found my way in to what I assumed was the media room, which was to be my home for the next seven hours or so. What there was no sign of, however, was the media accreditation desk. I could have been anyone, but being as I am vey honest, I sought out the desk, and picked up my pass. I was told in fairly uncertain terms which areas this allowed me access to, and the Red Carpet was not one of them. Meh… We’ll see about that.

Not a lot happened for quite a while, so I spent the time chatting with some of the other journos as they arrived. I got the impression that the good stuff was all happening downstairs on the Red Carpet. Egged on by FantaMan from The Daily Joypad who I believe was also itching for some action, I made my way down to the Red Carpet area where, indeed, things were starting to happen. Armed with my trusty camera (and some sharp elbows and a decent evasion plan) I started snapping away at the celebs as they arrived. I have posted some of these on the Live Feed Thread but I’ll put a few more up now. 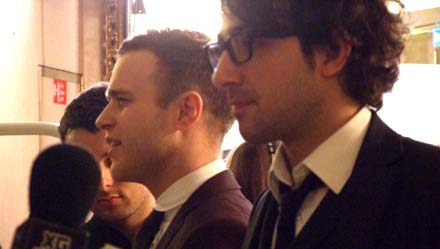 Olly Murs was the surprise hit with the journos. I thought he seemed charming. I am far from a fan of X Factor, but I can’t say I didn’t see any of it, and he was my favourite. I am pleased that he clearly isn’t a knob. He was telling the guys with big microphones that his biggest regret was telling someone (I didn’t catch who) that he’d give them his PS3 if he got through to the finals of X Factor. He really misses it now. 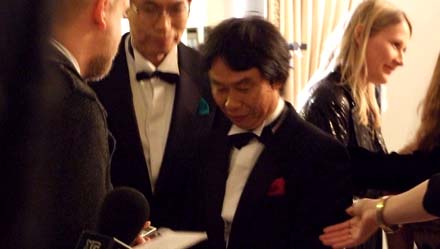 This man was treated like the legend that he is by everybody, and rightly so. He seemed very humble, and very gracious. I am thrilled that I was so close to a man that has not only bought me so much joy and happiness, but millions of people around the world. What a man. 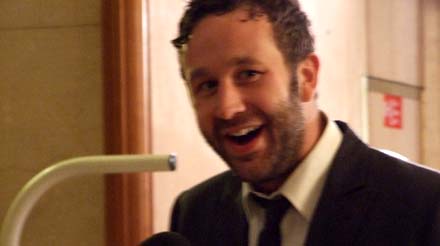 I am sure he meant it as a joke, but this gentleman annoyed me by answering the question “Do you play many games yourself?” with “I used to play a lot, and I like to call that time my ‘single years.'” The flames of the old stereotype that gamers are sad males sitting in their room playing by/with themselves need no fanning, thank you very much. 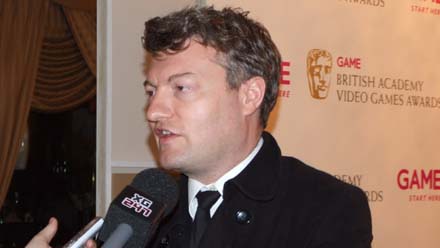 Charlie Brooker; moves about a lot.

I posted this in the main Live Feed thread, but as he is treated by many as The Messiah, I thought I’d post again. He is almost impossible to photograph, as he moves about all over the place. I took about twenty of him, and honestly, this was the best I got!

Something I noticed at this point is that the ‘celebs’ who were there to give out awards were treated as royalty. All this time the real celebs, i.e. those that had put a great deal of hard work into the making of all the excellent games without which the ceremony would not have been possible were nowhere to be seen. They were ushered off upstairs without further ado. I felt the balance here was quite wrong.

Unfortunately the wifi access was only available in the room upstairs, so I ran up and down the stairs approximate eighteen thousand two hundred and sixty three times in that hour to post pics, keep up with Twitter and try and keep the Live Feed going. The irony is of course if I had been in the right room to post regularly on the live feed, I would not have been anywhere near the action. 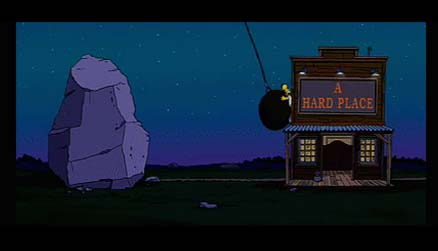 I am Homer Simpson.

Red Carpet over, celebs arrived and ushered to their special area; the real work was soon to begin. In the short time between celebs arriving and the ceremony I chatted to some of the other journos about their thoughts on the night ahead. The general consensus was that while Uncharted 2: Among Thieves lead he nominations it wasn’t really a BAFTA type game. The feeling was that Call of Duty: Modern Warfare 2 would sweep up the majority of the gongs, or failing that, Batman: Arkham Asylum. I still held out some hopes for my personal favourite, Uncharted 2.

It became obvious fairly quickly that this was not going to be either a walk in the park, or supremely glamorous. The set up in the main media area (that is the place to which I was meant to be confined) was a bit wrong. There was an area for photographing the winners that I have to admit I forgot about until I was reminded that photography was not allowed in the interview room. The interview room was also where the live video feed was being shown. Dilemma. Did I sacrifice the opportunity to photograph winners, or the video feed? It become apparent very quickly that the promise of ‘one-to-one’ interviews even for us journos at the bottom of the food chain was a joke. The chosen few had their big cameras and fat fluffy mics, and the likes of me wouldn’t even get a look in, even with the sharpest elbow sharpener in all the world. What also transpired fairly quickly was that the live video feed that was being piped through to our room was actually slower than the live internet feed. Results were being posted on Twitter before we were informed of them. Weird, non?

So, a quick call to Andy at This Is My Joystick HQ, and he was covering the winners announcements. I figured that without any hope in the deepest circle of Hell of getting any meaningful interviews that my best bet would be to hang around by the winners’ photography area. Doing this, at least I could subtly ask some questions of the winners while snapping them. Naughty girl. 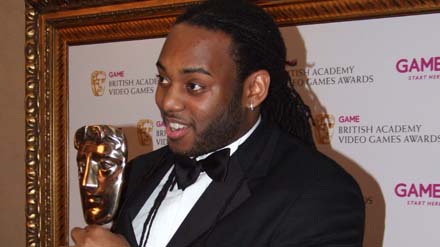 This gentleman was incredibly chuffed with his award for Artistic Achievement, and seeing his joy was one of the highlights of the day. 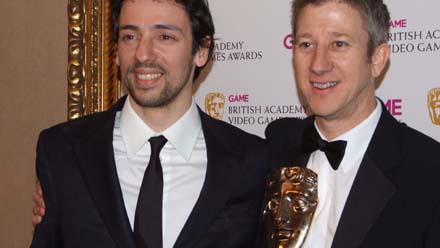 Keith Ramsdale picked up the gongs for Best Sports and Use of Online for Fifa10. Here he is with Ralph Little. 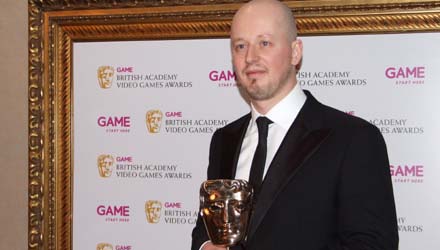 Guy Perkins for Left 4 Dead 2 picked up the Multiplayer award. 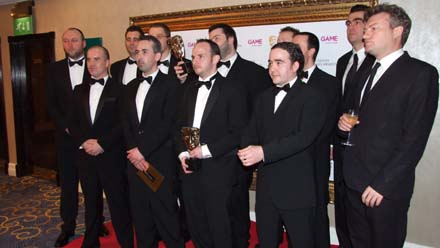 They deserve to be dead chuffed.

Penultimately; the winners of two awards for Batman: Arkham Asylum, Rocksteady Studios. I think their entire office turned out. I asked them how they felt about pipping Uncharted 2: Among Thieves to this prestigious award. Unsurprisingly I can report that they are “thrilled.” 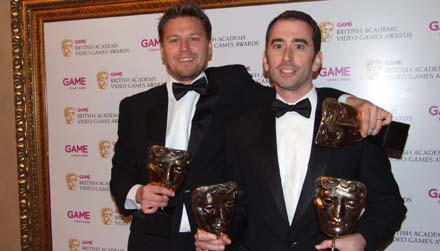 Gongs and grins all round!

Last but not least, the gentlemen from Naughty Dog laden with their four awards. I had to be patient to snap these guys. Understandably they were in demand, and enjoying their evening. Earlier on in the proceedings, certain other photographers got royally up my nose by being a bit snobbish; I might not have had an £8000 camera but was there to do a job just like them. When it became apparent to them that I knew what I was talking about, who the winners were, what they did etc, suddenly I was their best friend. I am a fan, but I was also trying to get the job done.

More importantly, unlike them I was trying to nab interviews, keep an eye on the online world, and take pics. It is for this reason that  I am thoroughly delighted that when I spotted Naughty Dog down the corridor I was able to congratulate them, thank them (and ask them whether Nathan Drake would be around for a long time (answer: “Oh yes!”)) and show to them that being a fan and journalist need not be mutually exclusive. Naughty Dog gave me the best shot of the night (apart from that one of Miyamoto that I posted on the Live Feed) and that put the cherry on the cake.

It was incredibly hard work, but in the end I did have a whale of a time. I got to meet two of my personal gaming heroes, (and another gaming God) and learnt a hell of a lot about how the world works. It was a baptism of fire, but I don’t think I got toasted.

One final quick note; I posted on the Live Feed that I was flirted with by a celeb I did not recognise. I can safely say he wasn’t Bill Gates, but I still have no idea. Sadly I didn’t take a picture as I was too busy being confused, so it will forever remain a mystery.