Tales From The Borderlands Details Emerge From The Vault

Do you have an idea of just what a Telltale Borderlands game will play like? I didn’t, which is why it’s lucky that a bunch of people decided to answer a bunch of questions whilst at SXSW. Slowly but surely it’s being made clearer just what the game is and I’ve gone from confused to intrigued.

The first thing to keep in mind is that Tales From the Borderlands will most likely play like other Telltale games you’ve seen before. There will be action and gunfire, but it’ll be dealt with “…in a Telltale kind of way.” To me, that sounds like quick-time events and button prompts appearing on the screen.

So whilst I won’t be holding my breath for a radical redesign of how Telltale make their games, it’s pleasing to hear that this will be a game with a much lighter tone than Telltale usually give us. 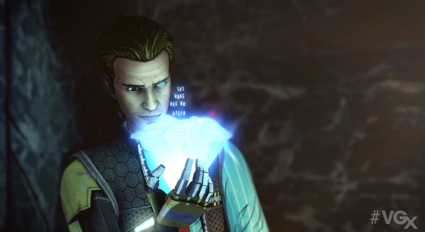 This is Rhys. He has a robotic hand. That’s all I know.

Focusing on the tall tales of two characters, you’ll play through the differing recollections of past events. Fiona, who’s something of a fraudster, and Rhys, who’s a company man, will each spout slightly different versions of the same event.

“You never really play what actually happened, you’re playing this Big Fish version of what happened…”

Telltale’s Kevin Bruner is also keen to point out that the game will retain the Borderland’s sense of humour. 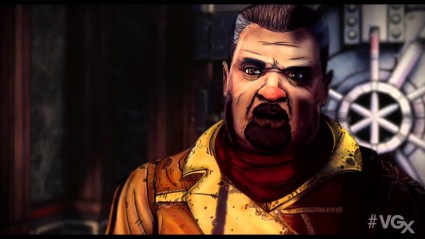 Will this man be funny? Funnier than Claptrap? Who knows.

Given how depressing The Walking Dead and The Wolf Among Us are proving to be, it’ll be a breath of fresh air to laugh at Telltale Game.

The full panel can be seen here.