The MMO To End All MMOs? Black Desert Hopes So

Korean developer Pearl Abyss has promised to make your dreams come true with the upcoming release of Black Desert.

That’s assuming that you dream of playing huge and gorgeous looking open-world MMO’s. You do? Then you’re in luck.

The game’s being toted as a large-scale sandbox MMORPG. The developers claim it’ll offer combat, open-world player vs player battles, strategic castle sieges with up to 400 v 400 assaults, resource-gathering , NPC- hiring, and non-instanced housing which can be shared with other players. Time to welcome your RoomieLoverFriends!

In addition to all the aforementioned goodness, the environment will have an impact on your gameplay as well. Traveling in the rain will slow down your transportation, it will be harder to grow ingredients in the winter compared to summer and you’ll also take damage if you don’t wrap-up warm when passing through areas with harsh weather. 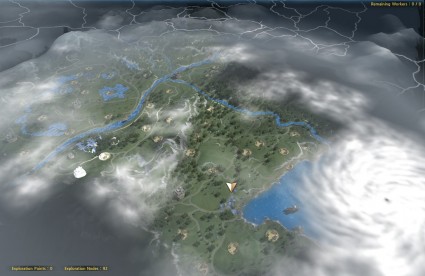 Notice the Cyclone making its way toward land.

Speaking of traversing – there will be no ‘fast-travel’ at launch. Depending on the response from players, the developers may or may not be add this in the future, though it seems that they want you to battle the elements.

Until then, all travel will be by mount. Each mount will have its own level, HP, endurance stats (yes they will need to rest) and the option of armor.

Three of five races have been confirmed so far; Human, Elf, and Giant along with the usual class system of fighter, sorcerer, barbarian and so on.

Slated for an Autumn 2013 release in Korea, the US and EU won’t see this powerhouse of an MMO until 2015. Let’s all hope it holds up to its promises.