Sony’s new re-designed store hasn’t had the best of starts. Whilst most people agree that the new look is shiny, easier to use and purty looking, it seems that the small issue of it working has come up.

What started off as reports of the store running slowly have now resulted in Sony simply reverting back to the old store for those in the UK. Other territories seem to be doing OK, such as Australia, but it seems that every time Sony do something right, they follow it up by doing something wrong.

With the extras that keep on getting offered to those on Playstation Plus, it was thought that Sony were getting their heads around the value of having a good online experience and were even starting to deliver one, but developments like this always seem to set them back to square-one.

Aside from false starts on their new store layout, there’s the annoying fact that games often fail to appear when they should. The Walking Dead is always delayed when it comes to releasing it on the European Playstation Store (meaning I have to dodge spoilers for a week), Retro-City Rampage still hasn’t gone live and Counter Strike: GO is nowhere to be seen for those on the PS3. 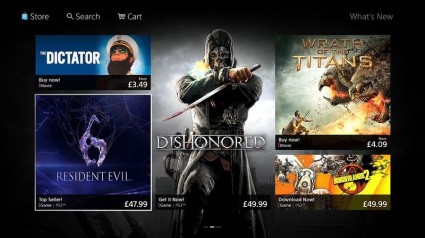 The new store has taken a lesson from Dishonored and has gone all 'stealth' on us.

Making this really frustrating is the fact that a good number of Playstation digital exclusives have been truly worthwhile of late. Tokyo Jungle and Unfinished Swan are just two that come to mind, so this annoyance is even greater when you consider the gems that are lying in wait.

Launching a new store is a big deal. There’s a lot of work that goes on behind the scenes and things can go wrong. We’re not here to make fun of you Sony, we want to see you through this. Just make it quick as I really need to be playing the new episode of The Walking Dead. Now!

UPDATE: Here we go. Sony have released a statement saying that the roll-out of the new store-front has been postponed. Saying;

“It is really important to us that  the best possible Store experience is  delivered and we appreciate your patience as we resolve these matters.”