When Alan Wake was eventually released after many years in development hell, it only turned up on the Xbox 360 (as reviewed here). However, way before it even saw launch, it was being paraded as the game to show off DirectX 10 and Windows Vista for several years, presumably before they realised it may not be such a good thing.

Luckily for all us PC gamers, Remedy have finally managed to bring the game to PC via Steam and let me tell you, this is the perfect way to play this gripping story all the way through.

Got ourselves a Stephen King here
The main focus of Alan Wake is its story and this really shows. You play Alan Wake, a bestselling author who is suffering from a severe case of writers block. To give him some time off, he and his wife travel to the town of Bright Falls, a tiny town in the Pacific Northwest where he intends to relax and hopefully get his groove back.

Unfortunately, this isn’t to be, shortly after arrival, he wakes up a week later in a car accident with no memory of how he got there or where his wife has disappeared to. Soon he is avoiding the police while also trying to fight off shadowy figures clad in darkness. 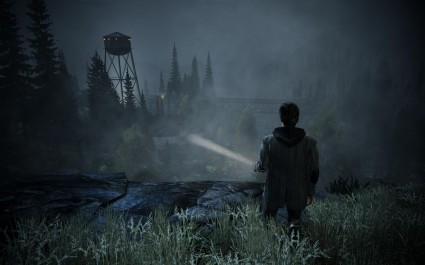 Alan needs to stop going for casual walks at night

The writing in Alan Wake is phenomenal. I love all the little details they wrote into the town that links both to Remedy games and also to its two big influencers; the TV shows Twin Peaks and The Twilight Zone. However, it’s not just a collection of references stuck together, the story is well written by its own measures and is paced perfectly to fit into an episodic structure. This feeling is improved even more so with the recap at the start of each chapter and the closing song at the end. It feels like you’re playing through a variant of Twin Peaks and I love it.

I also love the manuscripts you can pick up throughout the game, which are torn from a novel Alan was writing but has no memory of starting. These manuscripts help the player to know what’s going on elsewhere in the world and also provides hints for the future.

The PC edition also includes the two DLC packs. They are not quite as well written as the main game but they do help set up the story that is referenced in American Nightmare and will presumably be the starting point of the sequel when it arrives.

We are all but players
In Alan Wake, you control Alan through a variety of nightmare scenarios. Most consist of Wake having to travel through an area to get on with his quest to find his wife. Along the way, he will have to fight hordes of The Taken; humans possessed by the dark forces. Unfortunately for Wake, they are protected by darkness and so you need to burn it off before you can harm them, and this is done by using your flashlight or some other form of light.

The system as a whole works pretty well thanks to the inclusion of flares and flashbangs, which are act as a quick “get out of jail free” card if you are ever surrounded. Flares are also good for cutting enemies off as you struggle to get some generators working. Light also heals you and acts as save points, so they are pretty damn important. Of course, you can try and avoid being hit by using the dodge key, which rewards you with a cool slow motion dodge move. In fact the game really likes the slow motion, from downing a horde of taken or showing you when they pop out of the woods behind you. 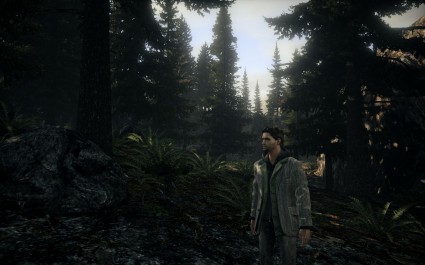 Don't mind me, just having a nice day in the woods...

Wake himself is an author, not a soldier and so acts like one. He can’t sprint very far and he doesn’t have much health. He can carry three weapons (revolver, flare gun and either a shotgun or a hunting rifle) and each has its purpose. Due to the light based gameplay, the humble flaregun is in fact the BFG of this game, triggering a slow motion explosion when you fire it. The gameplay does manage to show Alan’s frailty without going into over the top madness.

There are also a ton of collectables. These range from the manuscripts mentioned before to radios and TVs playing Night Springs (think Outer Limits/Twilight Zone). Most you will find along the way, but others will take you a while to find. There are 200 thermos’ of coffee to go hunt down and find, so good luck!

Overall, the gameplay hasn’t changed during its move to PC, however it is a little easier as the PC controls make aiming much easier. This in turn means there were fewer cases when I ran out of ammo than when I played it on the Xbox 360.

I did have some issues with the vital dodge command, mapping it to the shift key makes it harder to pull off when you are sprinting around, leading you to being hit as you attempt to run past people. It doesn’t feel quite as natural as simply tapping the right button to duck out-of-the-way.

Welcome to Bright Falls
Alan Wake already looked great on the Xbox with its huge areas, beautiful vistas and (as it’s a game based around light) a truly great lighting system. However, bringing it to the PC has truly taken it up another step. Thanks to the ability to have higher resolutions, the game truly looks stunning. The character animation does still look a little odd during the speaking sections but the rest of the game makes up for it.

It can be a bit of a system hog if you knock everything up to very high, but even on medium settings it looks on par with the Xbox. You can choose to toggle the UI on or off, which makes the game look tons better and stops you from being dragged out of the immersion.  In fact, if there is one issue with the graphics, it’s the fact the UI appears to be a little stretched, which is just a minor niggle.

I’m also a big fan of another visual tweak to game. As well as subtitles, you can now toggle a visual commentary on as well. This means that at certain points, members of the development team will pop up in the bottom left corner of the screen and talk about what’s going on and what lead to this arrangement. It is a better system than Valve’s Hit Node and Listens, although the fact it replays every time you respawn at a checkpoint is rather annoying. They are, however, very interesting to listen to, especially if you have any interest in how games are made.

A soundtrack to rival FIFA
If you are looking for a game with great voice work and music, look no further than this. Sound plays a vital part in the game, from Alan’s narration to the music cues telling you enemies are coming. In terms of voice acting, Alan’s voice is perfect throughout. Your agent, Barry, has a grating voice but it’s the only downside in what is otherwise a spectacular game. 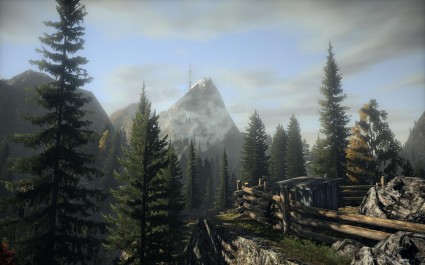 The scenery is literally breath taking

The game soundtrack is also great and the included tracks (in the Steam directory) are perfect both in the gameplay and on my mp3 player. My favourite tracks are from the Old Gods of Asguard, an in-universe band that pops up as a major plot point but the rest of the licensed soundtrack is also perfect. Most are used as the end of chapter tunes, which help to shape your emotions as the game carries on. The others pop up on the radios you keep running into and are a nice touch.

Write a good ending
Alan Wake was already a good game on the Xbox 360 and this PC re-release is the definitive version. If you’ve already sampled it, you can go back and play through the complete story of Alan Wake, while also seeing the visuals in a way you haven’t before. Personally, I love the gameplay in spite of one or two issues and I think this is a must buy, whether you’ve played it or not.