Beatbuddy is an indie title that we last looked at when we popped along to Rezzed earlier in the year. Ever since then, we’ve been sure to keep an eye out on what the fine folk at Threaks have been getting up to and sure enough, it’s time to see if the team have put the last four years to good use.

Beatbuddy is a puzzle-platformer that has a distinct look, smart design and a fantastic and interactive soundtrack. Beatbuddy is yet another reason that the ‘indie’ scene is becoming something that even the most casual of gamers can’t afford to ignore.

Beatbuddy is both the name of the game and of the main character. As a cute looking, floating blob, he sits somewhere in between Flubber and Slimer. He’s one of three Guardians of Symphonia, which is the underwater setting of the game and home to a number of weird and wonderful characters.

The game’s story is a little flimsy, though it’s helped greatly by whatever help Rhianna Pratchett gave the team. The script has a good pace to it, often leaving you smiling and helps add life to the already gorgeous looking characters. 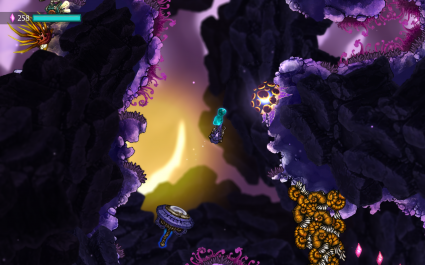 Can you feel the beat?

It all revolves around an evil prince who wants to use the Guardian’s powers himself so that he may rule… a lot? Too long? Forever? Also, evil is a bit strong. I’ll call him ‘naughty’. Either way, this ‘naughty’ prince kidnaps the other two guardians and Beatbuddy goes off to save them.

MusicalFriend
The gameplay sees you controlling Beatbuddy in this underwater world as you float about amongst rock, coral and other fantastic locales. The movement is pretty slick and makes moving from area to area an enjoyable experience as you time your presses of the ‘stroke’ button to give Beatbuddy a boost of speed.

Timing plays an important role in the game, as the world around you moves to the beat of the track playing at the moment. Hi-hat crabs, bass-drum launch pads and other exotic animals respond to the soundtrack and it’s down to you to get into the rhythm. Mistiming your movement will see you taking damage and having to restart at the nearest checkpoint.

You’ll need to get acquainted with how Beatbuddy moves rather quickly, as the main focus of the level design sees you solving puzzles for the most part, with combat being fairly simple and a secondary aspect to Beatbuddy’s adventure. 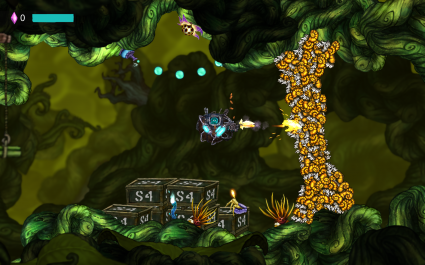 Vehicle sections do well to break up the game.

These puzzles are generally well thought-through and will test your reaction speed as much as your brain power. Closing gates, electrified pathways and falling ceilings will often test you as you make your way through the six gloriously detailed levels. It’s nothing ground-breaking, but Beatbuddy sets into a nice groove (sorry for the pun) and whilst it never radically shakes itself up, it does manage to keep on introducing new elements throughout to keep things interesting enough.

One of these elements is the vehicle sections that come along in nearly every level. They’re good fun and offer a crescendo of music that responds to your movement.nWith Beatbuddy’s main selling point being its interactive audio, these sections can be a real treat.

AuralAcquintance
Visuals have been given some mention already, but not nearly enough. The game looks great. 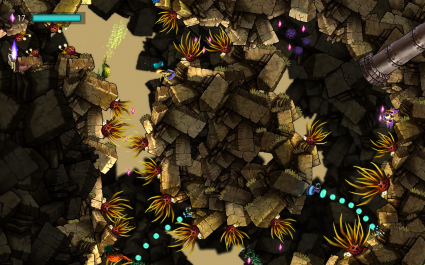 This picture is severely lacking in sound…

Primarily 2D, with only characters being 3D models, the world is given real life and a sense of motion thanks to the parallax scrolling that’s on show. This means that levels are made up of hundreds of layers of hand drawn art, giving the aquatic world a real depth that is rarely seen in 2D games.

The detail and finishing touches on show here help make exploring the game enjoyable. Thanks to few assets being reused, I never got myself lost. Considering this is a game that plays around with direction regularly and will have you backtracking at points, it’s amazing to think that each area is distinct enough to not make this an issue.

Beatbuddy himself is animated brilliantly and adds to the game’s overall fluid feeling. The only downside to this is that the other characters and enemies come off as a little too static in comparison.

AudioAmigo
The game’s audio, as you’d imagine, is top-notch. Some real talent has been hired in the creation of the game’s soundtrack (Austin Wintory, for example) and it shows. 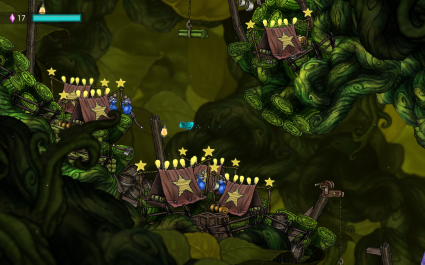 It sounds as good as it looks.

Through each level, the track’s arrangement will be played around with. As you get closer to an area with certain enemies, certain elements of the track will kick in. For example, one stage doesn’t have any vocals until you get near some Easter Island Head looking statues. This means the level and the its music build-up in unison to make a fantastic crescendo of audio and gameplay that works incredibly well.

Adding to the game’s list of ‘neat-touches’ is the ‘speech’ of the characters. Whenever a speech bubble pops up, beat-boxing can be heard that’s distinctive for each character. It’s also worth noting that the narrator at the start of the game ‘scratches’ his speech. You know, ‘Wiki-wah-wah’ and all that. You’ll know what I mean when you hear it, just trust me when I say that it’s a cute addition and we’ll move on.

SonataAmi
Not that there’s a great deal else to move on to. Beatbuddy has no multiplayer though has some ‘extras’ that are worth unlocking if you’re interested in the story behind the development team. A series of annotated pictures that are well worth a look and that continue the game’s good sense of humour. 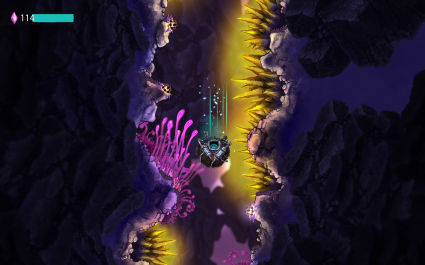 Not bad for a first game…

The only issue is that it’s not particularly daring in what it’s doing. Once it settles into its ‘puzzle followed by vehicle section’ flow, it doesn’t really grow but merely changes enough to stop it becoming boring.

In summary, Beatbuddy is a puzzle-platformer that offers enough challenge to make it rewarding and enough charm to make it engaging. It creates a world that will lure you in with its fantastic visuals and will have you humming its soundtrack in no time. For £12, this is a game that’s certainly worth trying out.