Quantic Dream’s David Cage has managed to turn himself into one of the industry’s most opinion-splitting figures. For every person you find that truly buys into his vision of ‘emotion’ and storytelling, there’s another that sees him as the cinematic orchestrator of shallow, straight-to-DVD interactive movies. While I’ll go as far to say that his games are interesting and I would likely play both Fahrenheit (Indigo Prophecy in the US) and Heavy Rain again, I found them lacking the very emotional connection that Cage has always evangelised. Weak characterisation and silliness prevailed over impressive atmospheres and, in Heavy Rain’s case in particular, the plot – the crux of the experience – was easily broken through nothing more than player choice.

Cage and his team are back with Beyond: Two Souls in another attempt to tug at your heartstrings. Unfortunately their latest effort is typical of their prior work, in that while it remains stimulating, it’s simply another display of cinematic style over substance.

Beyond: Two Souls follows the curious tale of Jodie, an outcast at the youngest age thanks to her permanent bond to an omnipresent spirit known as Aiden. We don’t know why Aiden came to be attached to Jodie (or why everyone mispronounces his name as ‘Aye-den’ instead of ‘Aid-en’), but we learn very early on that he’s overbearingly protective of her, and sometimes violently so. It’s a strong premise that ends up feeling like a ‘Forest Gump with ghosts’, as this spiritual link takes her through many astonishing scenarios and achievements, plus much heartache and alienation too. Over the course of Jodie’s story, you’ll guide her through childhood, teenage angst, military service and beyond. Please, excuse the pun. 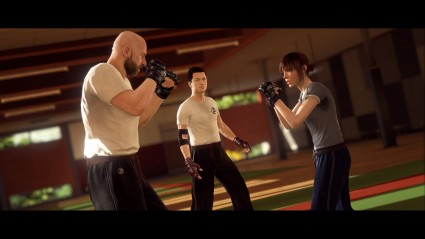 The events are played out in non-chronological order, and this proves to be both a blessing and a curse. A blessing because the narrative is much harder to break than in Heavy Rain and thus avoids similar gargantuan plot-holes, but a curse because implementation of this technique feels clumsy as it switches between time-periods in Jodie’s life. It’s really unfocused in this respect, as a few chapters add absolutely nothing to the story. Worse, some are just outrageously silly, though mostly towards the end where it rivals Fahrenheit/Indigo Prophecy for sheer ridiculousness. The biggest offender is actually the game’s lengthiest chapter, where Jodie stumbles upon a remote farm in the desert. The events there stick out like a sore thumb and just outright feel out of place with the rest of Beyond’s themes.

This fragmented approach also means that while Jodie has been the most invested I’ve felt in a Quantic Dream character since Lucas Kane, the supporting cast never gets to leave a lasting impression because you’re never given a reason – or even a chance – to care about them. This is Cage’s usual method, though; introduce a character and expect the audience to care for them without any framing, but once again it results in any potential emotion being totally undermined.

The closest I came to feeling anything was not in its commentaries of war or when Jodie was fighting off her pursuers, but in her most human moments; when she was vulnerable and isolated. Ellen Page’s performance was a large part of this partial success; she sells her performance as Jodie incredibly well. The same can’t be said so much for Willem Defoe, an actor I very much admire, but is underused and puts in an understated performance as Nathan Dawkins, the CIA scientist who takes a young Jodie under his wing. Still, the acting, both voice and physical are a huge improvement all round on Heavy Rain but it’s still not quite the blockbuster movie it positions itself to be.

Though I still don’t have faith in Cage’s storytelling ability, it’s impossible to deny that he and his team have impeccable skill with cinematography; their impressive eye for shot composition always offers an attention-grabbing display. It’s in this one area that Beyond succeeds, so at least the visual techniques used to tell the plot are effective, even if the writing is sometimes not.

It also helps that it’s a pretty game. Character models are especially well-rendered, with all manner of believable facial expressions and animations, and almost unrivalled skin textures; plus Quantic Dream’s virtual actors are no longer dead-eyed. The environments they inhabit, however, tend to look a little too perfect at times, leaving them looking like TV production sets. Ironic given Beyond’s pretense as a movie.

For those that have played Quantic Dream’s prior game, there will be no surprises when it comes to control methods; it’s still mostly made up of contextual stick movements, button presses, taps and holds when prompted. Only needing the left analogue stick to move around the environment this time, Beyond is definitely less awkward to navigate than Heavy Rain, but walking is still fairly robotic and clunky. The fact that a lot of the general animation is done so well makes it all the more jarring when Jodie gets stuck in a corner turning back and forth as you fight to steer her in the right direction. There is a basic combat mechanic that amounts to time slowing down and you matching the direction of Jodie’s momentum with a flick of the analog, and it works well in lieu of actual combat mechanics and fits the overall theme.

Controls get a little more unwieldy when you’re able to switch back and forth between Jodie and Aiden. Being a ghost, controlling Aiden allows you to float freely around and pass through objects, but it controls very loosely and it’s easy to lose track of your height and direction. You have some neat tricks, though, as you can knock items over or into enemies, possess or choke people, or allow Jodie to see what happened in an area just previously. Unfortunately, however, most of these events are predetermined and his abilities feel stunted. 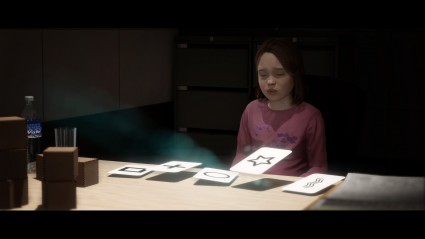 I couldn’t stop thinking about Ghostbusters at this point…

You can only possess or choke certain NPCs, and you can only knock over certain items when allowed; it only really gives you one true option in these scenarios. Aiden is supposedly bound to Jodie via a spiritual tether and the story explains that if he strays too far, Jodie becomes pained. That distance is only dependent on which walls the developer doesn’t want you to fly through, which proves a little illusion-shattering. In fact, although Aiden is sold to us as this uncontrollable, supercharged being, in most cases he’s just a switch-flicker, hitting the button to trigger the next chain of events.

That’s not to say that you have no choice at all, but a lot of the time the choices presented to Jodie and Aiden are about how they – Jodie in particular – react to the people that they come across, rather than offering a dramatically different chain of events. A conversation may play out a little longer, you might choose to have Aiden take revenge on your behalf instead of fleeing a scenario, but it won’t change the overall narrative in the ways you might have hoped. The ending is where you see some of your more important choices come in to play, but a lot of the time the choices are clearly moot. There were a couple of situations where I was trying to choose not to do something, and eventually Jodie would give in regardless of my attempts. Disappointing.

One step beyond?
When playing as the youngest incarnation of Jodie, she’s often asked questions by her CIA keepers and one of the most common responses is a nonchalant shrug, which was what I opted for most of the time. Looking back on my time with Beyond, that was fitting, as it mirrored my real-life reaction to most of the choices that were presented to me; my only actual involvement to move along a set narrative and not much else. Don’t get me wrong, I think this approach is fine and other games I love have done it to great effect, but when the story is this shallow and inconsistent, it’s hard to lose yourself to it.

Just as with Heavy Rain, I didn’t hate my experience with Beyond: Two Souls. Instead I simply grew indifferent as secondary characters failed to connect, the plot got more absurd and illusions surrounding its mechanics began to disperse. It’s still an interesting game to experience certainly, one I can’t begrudge people for trying and enjoying, but it’s simply an exercise of cinematic flair and not the emotional roller-coaster that it thinks it is.