‘If you loved Persona 4 Golden, then you need to check out Danganronpa.’

I got told this a few times leading up to the Vita release of Spike Chunsoft’s latest visual novel and, although it’s in a completely different genre, I could see why. Colourful anime characters, a high school setting, the premise of a murder mystery with a crazy-looking bear at the centre of it – it did admittedly look to be familiar ground. Yet while the insanely popular Atlus JRPG won my affections with themes of trust and friendship and by being utterly charming, Danganronpa: Trigger Happy Havoc focuses on the more morose subjects of paranoia, distrust and despair.

Rather than hanging out and enjoying the company of my virtual school friends as I did in P4G, in Danganronpa I instead spent my time second-guessing them, suspecting them, and using my detective skills to expose them.

You play as Makoto Naegi, a painfully-average youngster that through lottery wins the chance to attend Hope’s Peak, an extraordinary school for ultimate students. Everyone that attends the school is the very best in their field, be it art, writing, martial arts or even unthinkably niche areas such as leading biker gangs or writing fan fiction. Having won his place by a draw, it’s only natural that Makoto is the Ultimate Lucky Student.

Makoto arrives on his induction day a tad early, and with the school seemingly deserted he decides to explore, but it’s only a matter of minutes before he passes out and groggily awakes later in one of the classrooms. He discovers that the school has been locked down: metal plates cover the windows, security cameras and monitors adorn every room and an impenetrable, hulking, door blocks the exit. Makoto is not alone, however, as he meets fourteen other equally confused students and the group’s tormentor; a creepy, remote controlled bear known as Monokuma.

Monokuma explains that they will all be held captive for the rest of their lives unless they manage to graduate. The condition for graduation is not through academic brilliance as one might expect, but through murder; one of the fifteen must kill one of their new school friends and get away with it. Although they collectively resist, Monokuma is adept at offering incentives and it doesn’t take too long before the first killing takes place and sends the surviving students spiralling into paranoia. Following any killing within the school walls, the students are allowed time to search for clues, before they participate in a class trial where they must identify the murderer. Get it right and the killer will be brutally executed; get it wrong and all but the killer will perish. 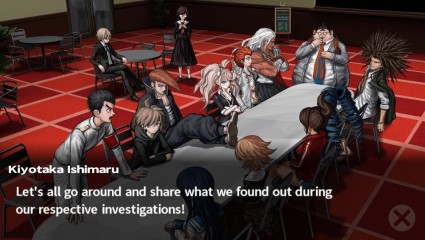 Who will be the first of the gang to die?

What follows is a mixture of dialogue reading, first-person exploration, clue gathering and contradiction spotting. Being labelled a visual novel, it’s natural that Danganronpa delivers a hell of a lot of dialogue (most of it unspoken), so it goes without saying that if you’re not into reading while playing then this probably won’t be the game for you. In fact, the first hour is pretty much all written dialogue, making for a slow start, but when things get going around the time of the first murder, they really get going.

It helps, of course, that the characters are varied and interesting and only grow more fascinating the further you get. Although they appear only as cardboard cut-outs in interactive scenes and are motionless during dialogue, the colourful anime designs are brilliant; yet it’s the way they’re written that stayed with me. Sure, some of the dialogue falls in the awkward bracket, victim to both translation and cultural difference, but for me that was all just part of the charm. Throughout there’s a conflicting sense of unease as, perhaps conditioned by all the Persona comparisons, I wanted to trust these characters but ultimately ended up suspecting them all at different points, even those I really wanted to believe in.

When you’re not knee-deep in discussion, you’re able to explore the school at your leisure in first-person and, not unlike Persona, progress time by choosing who you will spend your time with. Doing so not only allows you further insight as to who you might be able to trust and who trusts you, but in hanging out with people enough and by giving them suitable presents (bought with tokens hidden throughout the school), you can unlock perks to use during the class trials.

Once a murder takes place, you’re required to look for ‘Truth Bullets’, clues that allow you to determine how the incident went down. You’ll hunt for murder weapons, examine the body and look for other items or environmental hints that might help implicate one of your fellow students. In some of the cases, especially early on, you’ll believe that you’ve figured it from the off, but it’s rarely that simple.

In the first case, for example, I knew who had made the killing strike within ten seconds of viewing the crime scene; in fact I showed my wife the scene and she too – without seeing any other part of the game – echoed my thoughts. For a short spell I found it annoying to have to go through the motions like this as my character had yet to have the penny drop despite it being so bleedin’ obvious. When it came to the trial, however, there were elements to the crime I hadn’t remotely considered. This, pleasingly, happened more than once and none of the twists seemed like they were coming out of leftfield because the evidence is all there. It’s surprising in the best way.

In this sense, Danganronpa becomes less about smugly figuring out who did it and more about using the available evidence to map out the grisly chain of events. The trials are made up of a number of different systems, though much of the process revolves around listening to everyone discuss the circumstances of the murder, seeing a lie or contradiction and then literally shooting the weak statement down with the right truth bullet by aiming and firing (or tapping if you prefer to use the touchscreen).

Other mechanics simply have you presenting the correct evidence when asked, or you might be required to shoot moving letters in the right order to fill in the blanks of an important clue. Other scenarios see characters refuse to listen to your arguments and the stalemate is remedied, bizarrely, with a rhythm game called ‘Bullet Time Battle’ during which you shoot down their nonsensical objections at rapid speed. Finally, once you’re in a position to close the case, you’ll get to piece together the proven events by completing a manga comic, which fits delightfully with Danganronpa’s gorgeous art style.

All these systems evolve as you progress, throwing in enhancements like focus (allowing you to slow time for a very short period to steady your aim), or dastardly distractions and modifiers to make hitting the correct phrase more difficult. Fail to shoot down the right statement or use the wrong truth bullet and you will lose your influence with the other students, and when you lose all influence, you’ll lose the game. There is no true penalty for failure, though, other than the shame and annoyance at being forced to start the current debate over again.

It’s an odd mix of mechanics to bring together for a murder mystery, I’ll give you that, but it works so, so well in practice. Even though deep-down I knew the sense of being a master detective was really a lie – cases can only really go one way after all – the class trials became my favourite portion of Danganronpa, with drama and high tension making for compelling narrative as the real story unfolded. It’s here the strength of the soundtrack really hits home too, as the kooky songs make way for a ridiculously catchy trance number which helps to add much urgency into Danganronpa’s most dramatic component. 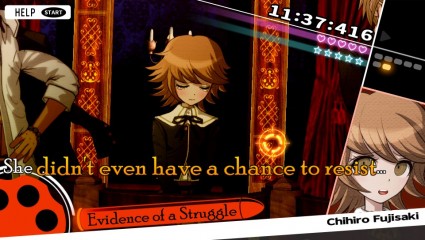 Get ready with that Truth Bullet!

Now, fans of Spike Chunsoft’s previous Vita effort, Virtue’s Last Reward, may be disappointed to learn that there is only one ending, but this was absolutely not an issue for me. The reason being that I spent a lot of my time in Virtue’s Last Reward following a particular story path through the choices asked of me, and then near the end I faced a roadblock. To get around it I would have had to set my current progress aside, head back in time to explore the alternative choices just to eventually see the outcomes of my original decisions, and that ultimately killed the experience for me. One ending here meant that I wasn’t forced to abandon the story I’d become invested in, and Danganronpa felt a better experience for it.

Once you’ve finished the main story you’ll have access to a ‘School Life’ mode in which the students are tasked with building back-up units of Monokuma. This is pretty much a menu-based resource management game where you set students to gather the resources required to build new Monokumas, while also trying to keep them all rested and the school clean at the same time. I never felt compelled to devote much time to this mode outside of an exploratory first look, but if you’d like to spend some more time with these characters, then School Life at least offers you that.

Bloody great!
Danganronpa: Trigger Happy Havoc is a thrilling little whodunnit that managed to both engross and constantly surprise me for the entirety of its 24 hours. It does start a little on the slow side and that may put some off before it opens into its satisfying and compelling stride, but once it does it buzzes thanks to a charismatic troupe, high suspense and a delightfully evil sense of mirth.

I would never have thought it going in, but this bizarre mix of storytelling, investigation and courtroom action has resulted in one of my favourite Vita games to date.