To start this review, I feel I need to start with an admission. I played the original Dark Souls for about an hour, didn’t get it and subsequently sent it back to LoveFilm. I had no interest in ‘proving myself’ and simply wrote off the Dark Souls series as simply ‘not for me’.

Yet, being the undeniable professional that I am, when no-one else at TIMJ would step-up to the Dark Souls plate, I begrudgingly said yes and got involved. What follows is a review of Dark Souls II by someone that had no interest in playing the game beforehand, yet still went ahead and completed the game over 50+ hours.To begin, the game starts with little explanation. Get used to that. You’re a cloaked traveller of some sort and you’re ‘called’ to the distant land of Drangleic. A cut-scene shows you getting sucked into a whirlpool of some kind, then three old women – looking straight out of a Shakespeare play – tell you that you’re cursed.

It goes on. There are monsters called ‘hollows’ that are essentially people who have been trapped in Drangleic for so long that the curse of the magic of the land of the King has made them… hollow. Whatever you do, don’t call them zombies. 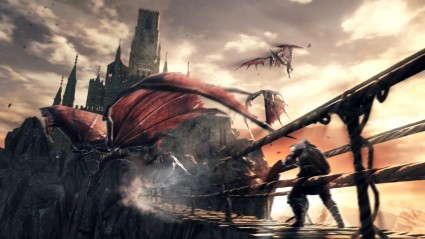 This isn’t even a boss…

To be honest, there is a story in the game. Somewhere. There’s something to do with a King, his Queen and maybe some giants. This is wrapped up in a whole lot of magic, curses and events that occurred ‘a long, long time ago’. Most of the ‘lore’ has to be dug up and inferred by the player, as the game doesn’t really spell out much of anything.

Some will cite this as an example of a deep and meaningful mythology, but to me it all came down to NPC’s that had a few lines of cryptic ‘Ye-olde’ dialogue, item descriptions that went on for three paragraphs and loading screens that also displayed said item descriptions. A cinematic experience this isn’t.

With this said, there is a fairly interesting couple of sequences towards the end of the game that do help flesh out the world and explain what happened before you showed up. To say much more would be spoiler territory, and we all know how mad the Internet gets about spoilers. Still, to complain about the game’s story would be like complaining that Broken Sword’s cover-mechanics aren’t very good. What Dark Souls II offers is a giant world to explore, just don’t expect to be driven along by any sort of narrative.

Exploring is what Dark Souls II is about. The world is huge and contains a good range of different area types. You’ll be rummaging through forests, castles and dungeons for hours on end. Each area is pretty meticulously designed with chests, traps and enemies all placed in a purposeful way. It’s unfortunate for you, the player, that the designer’s purpose was to create areas that lull you into a false sense of security only to bring your run to an abrupt end. A chest that shoots arrows, zombies that rise from the ground and giant boulders coming at you like you’re Indiana Jones are all things that will occur the minute you think ‘phew, a place to chill’. 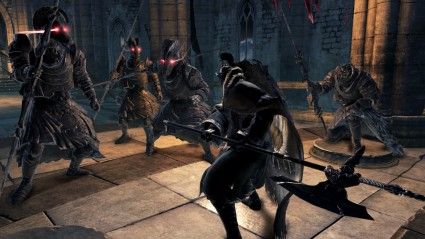 Whilst these areas are all greatly designed in terms of item and enemy placement, it’s hard to say they wowed me visually. Nothing about Dark Souls’ design in general, not just its locations, managed to appeal to me; it feels a bit felt tired. Foggy forests? Seen it. Spooky dungeons with skeletons and ghosts? Yep. A lava castle? Yep, the original Mario had that for crying out loud. There are spots within Dark Souls II that grabbed my interest but for the most part I wasn’t particularly taken in by the scenery. It’s hard to think of this as too much of a negative, however, as the scenery isn’t there to be admired, it’s there to be defeated.

As you all know, this isn’t a stroll through a mean-spirited Crystal Maze. It’s not all labyrinths and dungeons. There’s a boat load of enemies to take care of too.

These also suffer from slightly cliché designs. ‘Hollows’ basically are zombies. There are giant knights, cursed vikings (I think that’s what they are) and nasty bugs. Again, much like the environments, it’s hard to be too critical of this as the real ‘joy’ of each enemy is finding out its weakness, determining its attack patterns and ultimately defeating it.

Fighting enemies is often extremely tense and requires concentration, patience and timing. To my mind, I found the combat to be clunky, with enemies and the main character having long ‘wind-up’ animations for nearly every attack. This is meant to give every attack an element of risk and reward. Slow swings of your sword or waves of your wand will leave you open to attack, but it really does drag things down to a annoyingly slow pace. You’ll often be killed by your lack of patience as you spend five minutes killing a low-level enemy. 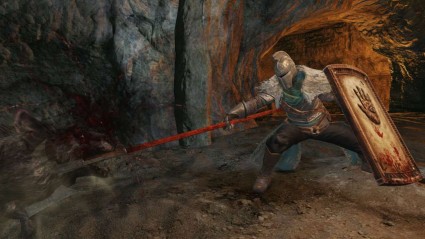 This rat requires as much respect as the 100ft monster in the next room.

In the game’s favour, this does make particularly tough battles all the more rewarding when they’re over. Like finishing a really hard exam or filling out your taxes, it’s a lot of stress and often you’ll wish you weren’t doing it, but when it’s done – wow. Thank goodness. What a relief.

Dark Souls II is full of these ‘yes, I did it!’ moments, mainly thanks to the fact you’re never more than a few feet away from a boss. Honestly, the game is full of them and they’re generally tough-as-nails, visually impressive and defeating them will no doubt give you some bragging rights. Oh, and a whole load of souls.

That’s right. Killing things means you’ll accrue souls. Souls are Dark Souls II’s currency and levelling up mechanic in one. This is a great idea as you’ll often have several plans for your souls, but not enough to go round. Upgrade a weapon, buy a new shield or level up? Odds are, you won’t have enough to do everything at once, so it’s a case of grinding away through areas you know well or ploughing ahead and hoping the next boss you encounter drops enough souls to do all of the above. Although, this being Dark Souls, nothing’s that easy. Once you’ve got your souls, you need to keep hold of them.

This is because dying will see you transported to the last bonfire you used and it leads to you returning as an undead ‘hollow’. This means that some characters will treat you differently, the size of your health bar will slightly reduce and most importantly your souls will be reset to zero. The heartbreak you’ll feel when your stash of 50,000 souls vanishes is beyond words. 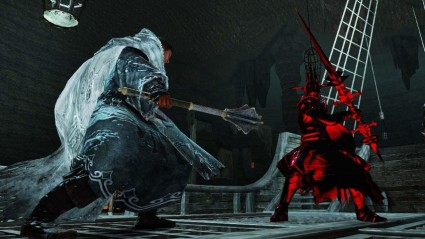 Other players can write helpful messages or invade as phantoms. Either’s fine.

Don’t worry though, there is a chance of redemption. The world is littered with bloodstains that you can touch. If you touch a bloodstain, you get to see how someone else (thanks to the wonders of the Internet) met their end. These glimpses into someone else’s misfortune serve as humorous pauses, repeated confirmation that you’re as bad at this game as everyone else and also act as warnings of potential dangers.

However, track back to the place of your own demise and you can go and touch your own bloodstain. This will see you reunited with those lovely souls. Just be sure not to die again before recovering your souls. You can only have one bloodstain in the world at any one time, so your new bloodstain wipes out your old. Now that’s heartbreaking.

Aside from the previously mentioned bloodstains and traps you’ll also come across messages scrawled by other players. These messages are sometimes nothing more than trolling, with plenty of players writing ‘try jumping’ in front of bottomless pits, though they can often be pretty useful. Using a pre-defined set of phrases and keywords other players will leave these glowing breadcrumbs to inform you of fake walls, treasure chests and precious bonfires. 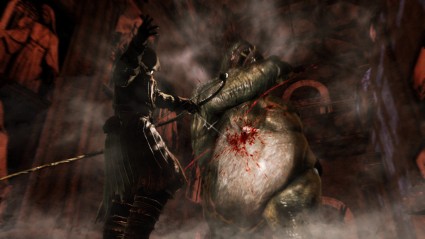 Don’t ask this guy for directions.

This brings to light another huge issue that people will either champion as being ‘part of the game’ or it’ll be a deal-breaker that infuriates. The fact is that these messages are the biggest form of help.

Dark Souls II gives you nearly no guidance. Progress often occurs via stumbling into new areas or re-visiting old ones out of sheer frustration. It’s also crucial to speak to all of the characters you come into contact with as they will, after prompting them four or five times, eventually tell you something useful or give you an item of worth. The game as a whole revels in being as cryptic and obtuse as possible.

Again, people that have already fallen in love with the Souls series will tell you this is a plus, that figuring out the game and all of its idiosyncrasies work is part of the charm. I, however, will tell you this is nothing more than a chore. Trial and error is something that is lambasted in near every game, though the Souls series gets a pass on this. Why? I’ve no idea.

With all this said, the mean-spirited nature of the game, the way it stacks nearly everything against you, does make any progress feel truly earned and highly fulfilling. Every fight won, every boss defeated and every door unlocked feels like a real achievement. I’m not talking about ‘Here’s 20 GamerPoints’ type of achievement, I’m talking about a fist-pumping, expletive shouting, make me get out of my chair victory.

Ultimately, I didn’t enjoy my time with Dark Souls II. I thought combat was too slow and monotonous, it required far too much trial and error and I found myself wandering around without an objective for hours at a time.

By the 8th time you have this fight, it’ll be a cinch.

Soulless?
This left me thinking, was I meant to enjoy this? For every moment of utter frustration, there was a moment of elation. When the credits rolled, I felt more relieved than I ever have after completing a game. This was mainly down to being thrilled that I wouldn’t have to play it ever again, but I think this is a game that people need to try. Some will fall in love with its unforgiving combat and get hooked on the sense of fulfilment that this game offers. Others, like me, will find the combat, world and mechanics nowhere near interesting enough to be worth slogging through.

This is what it ultimately boils down to.

Those that are dedicated enough to wade through all of the barriers that Dark Souls II puts up will find one of the most satisfying gaming experiences out there. Those that don’t like the idea of struggling through all of that won’t be judged harshly by me. I’m kind of in your camp…