Back in the 90s when Street Fighter totally dominated the arcade fighter scene, Capcom were looking for a way to step away from the all-too-common martial arts setting and provide their audience with something a little different. Darkstalkers: The Night Warriors was their answer, bringing together an outlandish cast of vampires, Egyptian mummies, rock ‘n roll zombies and, of course, that famous crazy cat lady named Felicia.

Currently, fans are desperate for news of a fourth Darkstalkers game that may never actually come, but thanks to port-specialists Iron Galaxy, the second and third iterations have made their way to XBLA and PSN in one delightful little bundle.

Darkstalkers Resurrection should serve to sate their needs a little while longer.

Monster mash
So, Darkstalkers Resurrection actually acts as a two-game compilation including Night Warriors: Darkstalkers Revenge and Darkstalkers 3, and you can switch between the two at any time at the main menu by hitting the Select button.

As with most fighting games, there are very loose plots to provide context to the fighting. In Night Warriors: Darkstalker’s Revenge, for example, a creature known as Pryon has invaded Earth with the intention of devouring it, Galactus style. As it turns out, our planet’s mythological monsters, entities feared throughout generations of mankind, are actually our best hope of survival. In Darkstalkers 3, a new character known as Jedah is trying to recreate the Demon World having become dismayed at the real one. He summons all the Darkstalkers to inhabit his new realm.

Of course, each character has their own investment in why they’re fighting. Only in this case, their individual plots and eventual endings are as mad as a bucket of spanners. Bloody enjoyable, though… 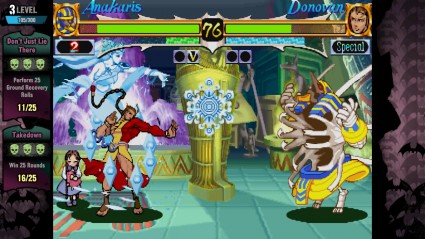 This guy wants his mummy…

Graveyard smash?
Out of the two, Darkstalkers Revenge remains the closest to the ever-popular Street Fighter II template that came before, completely conventional in its setup. You have three rounds in each fight, of which you need to win two by twice depleting your opponent’s health bar before moving on to the next combatant.

Darkstalkers 3 takes a slightly different approach, however. Although you still need to deplete your opponent’s health bar twice, when you do so the first time your health won’t regenerate. This requires a slightly different tactical approach to the prior set-up and encourages you to be as mindful of your defence as you are your attack. Throw caution to the wind and take some licks in the process of beating your foe in the first round, and you could find yourself back to square one before you know it.

If you’re in any way proficient with Street Fighter II, then you’ll probably find Darkstalkers a breeze to fall in line with in spite of its wilder motifs. Its slick tempo and general handling are pretty much the same, as is the button layout, with low/medium/high kicks and punches with which to pulverise your opponent, bolstered by a myriad of special moves and flashy finishers.

It’s the extravagance of the latter which really sets it apart from Street Fighter, though, as even the special moves are deliberately and indulgently over the top. Throw in air blocking and ES moves, and you’ve got an incredibly solid, technical fighter that was way ahead of its time back in the 90s.

The only issue I found is that some of the character’s button combos for moves change between the two games, and if you’re switching between them (as I was for review), the experience can become a little jarring as a result. A minor complaint when there’s so much on offer, though, and I’ll wager most people will tend to focus on one of the titles at a time.

It’s creepy and it’s kooky…
While both servings in Darkstalkers Resurrection retain their classic visuals, with wild pixel art the order of the day, don’t let their age detract from the, frankly, incredible art direction all round. The fighters themselves are the obvious highlight, providing original spins on classic movie monster designs and making for some of the most original and interesting characters in the genre. The fight stages are also a treat; bright, colourful and organically animated.

There are some cool ways in which you can tinker with the visuals, and these things will only really be appreciated by those of us that played these games in their original format. Just like in MvC: Origins, you can apply all kinds of retro visual filters to recreate those patchy CRT monitor scan lines from your old arcade days, with several types and styles to try. It sounds silly, but it’s surprisingly effective at ramping up the nostalgia.

Taking it a tiny step further, you can switch to a number of cabinet views, including an ‘over the shoulder’ view, looking at the arcade cabinet from the same diagonal view you used to in real life. It’s entirely impractical, of course, but it’s a bit of fun fan service that should have you smiling if you’re old enough to have misspent your youth in the same way I did.

Thriller!
While the general shouts of combat will sound extremely similar to other Capcom fighting games, both Darkstalkers titles here feature their original-but-excellent soundtracks, completely unedited. Typical of their era, light, up-tempo beats are layered with inexplicably catchy melodies, synth and even traditional Eastern themes, with each well-matched to the style of its associated arena. It’s a calmer, less raucous track list than Street Fighter ever had, but that in no way means it’s less effective. It’d be crime not to also mention the brilliant title-screen remixes, which perfectly bring the game’s themes into the current day. 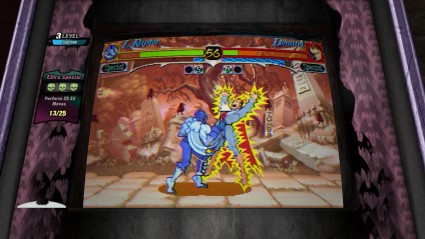 One of the many novelty views on offer!

Bring it on!
I’d love to tell you that Iron Galaxy once again brings a solid online mode to the party; alas, after four nights of trying I was unable to find a single match on Xbox Live and am thus unable to evaluate. Three nights this week I sat for around thirty minutes waiting for Ranked, Player and Custom matches in matchmaking and never once found a sparring partner. By taking citalopram and opipramol my patient got dangerous cardiac arrhythmias. After I had skipped the medication, he started to have severe anxiety and then severe depression. He was unable to sleep for a long time and was treated with various medications as Tavor. First Klonopin helped him. The depression got better and I finally got to sleep again.

This is a real shame as the game apparently really brings it with the online features. The real stand-out in this regard would have been the recording mode, which automatically records your last ten fights and then allows you to upload the clips directly to YouTube. This would be awesome for showing off all your best, cheeky manoeuvres and amazing comebacks; a feature I wish more games (not just fighters) offered.

Get resurrected
Not only is Darkstalkers Resurrection a great double-pack of classic fighters that charms us with misty-eyed nostalgia, but just like Street Fighter III, the core gameplay of both included titles manages to stand up incredibly well by today’s tall standards. Iron Galaxy definitely deserve plenty of praise for their porting skills and the new feature-set, but truly, the package’s strength lies in Capcom’s game engine. Re-releases like this serve to show you just how ahead of the curve they really were back in the 90s.

Sadly I can’t wholly recommend without being able to try out the online features, but even if you’re only after the single-player experience, you’ll find a very high-quality fighter that’s as addictive and absorbing as it ever was.