Despite being a dab-hand at Tekken back in the PSOne era, I’ve traditionally always much preferred the 2D fighter to the 3D. I have dabbled here and there over the years, of course, and I distinctly remember having much fun with Team Ninja’s Dead or Alive 4 back in 2006.

The series, famous for its over-sexualised vixens, made its comeback with its fifth iteration last year on home consoles, but with the Vita proving such a good home for the genre thus far, a handheld port was probably inevitable.

Thankfully, for fans, not much has been lost in transition.

Set a few years after DOA4, Helena, the head of DOATEC, has set about trying to rebuild the company with a more honest approach than under its old hierarchy. She closes their bio-weapons divisions, previously responsible for the out-of-control clone of combatant Kasumi, known as Alpha-152. To prove DOATEC’s new peaceful vision, she once against hosts a… errm… fighting competition.

Well, that’s certainly one way to get the pacifists back on side… I guess? Meanwhile, Alpha-152 is still missing, and as a result it would seem the threat of bio-weaponry is not yet totally behind our tournament’s contestants.

The Story mode fuses the fights together with lengthy, cinematic cut-scenes, showing how the cast fare over the course of the Dead or Alive 5 Tournament and beyond. You’ll take charge of each character throughout the campaign and follow the events in non-chronological order, piecing it all together as you go. The plot is, simply, dumb fun. It’s nonsensical, at times baffling, but it still manages to entertain due to the fact that it never takes itself too seriously. More than that, it’s a good way to get a feel for each character, which is invaluable when you decide that you want to tackle the other modes. 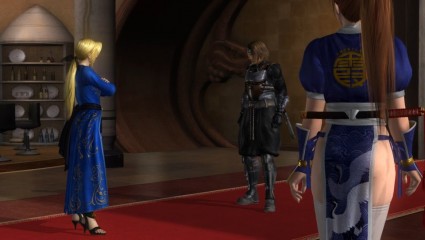 The story is dire, really, but there’s a charm to it.

Getting DOATEC-nical…
For those that haven’t delved into the world of Dead or Alive before, you’ll find a game that relies heavily on close-quarter, hand-to-hand combat rather than ridiculous (but fun) special moves and over-the-top finishers. You’ll find no fireballs here.

At first glance, it also appears to be something of a simplistic fighter, with only two attack buttons and a block supplemented by throws and combos. It’s true that just hammering away at the attack buttons and using only basic combos with decent timing will get you through the offline modes and be enough to make you feel like a world-class martial artist, but in doing that you’re missing half the fun. Once you get past the basics, DOA5 has layers of depth that are seemingly easily missed and those that dig further than button bashing will find a very deep and precise fighter. Treating it as anything but is not only doing the game a huge disservice, but is also a sure fire way to find yourself swiftly humbled should you knock up the difficulty or take the game online.

For starters, although there is only one button apiece for punches and kicks, there is a surprisingly large range of attacks possible with just those two buttons and the analogue stick. Stringing lengthy, classy-looking combos together this way is an absolute joy too, especially when you start getting your head around the most effective patterns.

Knowing the combos isn’t enough, though. Counters, throw reversals and “Critical Stuns” play a huge part in DOA, and should you have the timing down, you’ll be able to skilfully escape a hold or block an assault and mount a counter, devastatingly of course. This is what the game is really about; waiting for your opponent to make that tiny error in judgement and then punishing them brutally for it. The tide of battle can turn in a split-second in DOA.

It truly is just a split-second too, as the game moves lightning-quick, resulting in a lovely sense of rhythm that suits its play-style perfectly, especially when you’re getting your head around the more technical aspects. When this sense of speed combines perfectly with two players who have these defensive skills down pat, it can result in fights that look exceptionally well-choreographed. 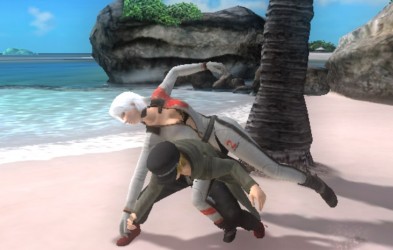 Stage interactions and transitions aren’t exactly a new mechanism in fighting games or even this series, but here they’re more brash than ever. Whether it’s the simple act of kicking your opponent backwards into electrified ropes or down some stairs, or to go as extreme as launching them headfirst into a circling attack helicopter in the middle of a warzone, each interaction is loud and dramatic. The Cliffhanger mechanic adds another level to this, where the player getting thrown or knocked over an edge can cling on for dear life and trigger a QTE event, which determines how much damage will be done. This I didn’t like so much, as it was a tad fiddly and disrupted the flow of the fight too much.

With that, it’s understandable that such over-the-top displays won’t be to everyone’s tastes, so it’s good that purists can happily turn these things off and leave their fists to do the talking.

Outside of the Story and Arcade modes there’s plenty to be getting on with, with Time Trials and the wave-based Survival mode. The training options are vast and genuinely helpful, really going to great lengths to teach you everything you need to know, while the now genre-standard Challenge mode remains the most effective teaching tool in mastering your skills with a specific character.

There is a Vita-specific mode included called the Touch Mode, and here players fight from a first-person view and fight using the touch screen. Attacks are made by jabbing at the enemy where you want to hit them, while juggling, throws and sweeps are handled by a combination of finger swipes and pinches. To be honest, it’s pretty much a pointless addition, and you’ll likely play it once and never return to it again. 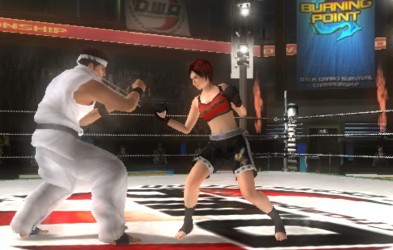 Virtua Fighter fans will welcome some of the roster additions.

Bouncy, bouncy, oh what a good time…
Fans will be delighted to see that DOA5+ doesn’t take too much of a hit in the transition from the big screen to the small, in what’s an impressive handheld outing all round. The various arenas are a real highlight, with lots of detail and moving parts, while the stage transitions and related dangers are visually thrilling when activated in combat.

Any downsides here will fall solely on your own personal tastes. The characters still have that slightly blank, plastic look to them as they’ve always had, such is the game’s design philosophy, and while the women are less sexualised than they previously were (if you can believe that), their boobs still swing and move in that disturbingly inhuman way.

Still, it’s impossible to deny that there are some impressive things at play here. Fighters will visibly sweat, get dirty and take battle damage over the course of a fight. Animations are also pretty much flawless, robust in their actions. It just looks brilliant in motion.

You spin me right round, baby right round…
Musically, the game hits all the right notes with arcade-styled catchiness, but it’s a darker, guitar-driven affair compared to the happier tunes usually featured in your standard fighting game. It doesn’t feel out of place, though, despite the game’s overall colourful, campier outlook.

Speaking of campy, the voice acting in the story mode is unapologetically terrible, but delivered in a way that somehow becomes endearing. Because of that, its flamboyance only ever feels deliberate, and I have to admit there is a certain charming innocence to it all.

Those are fighting words…
This Vita port’s online mode has unfortunately been scaled back a tad, with only ranked and non-ranked fights on offer, and no tournaments or online spectator modes as seen in the home console version. Regardless, it’s very much worth spending some time against real people thanks to the game’s strong fight mechanics.

It’s at least completely solid where it counts; in its netcode. The game has proved flawless in the matches I’ve played so far, offering smooth fights with not one single drop of lag, which is impressive considering that you can also play cross-platform with PS3 owners. Ashamedly, I’ve yet to win a match online, but not once have I been able to blame it on anything other than the superiority of my opponents or, bluntly, my own lack of skill. 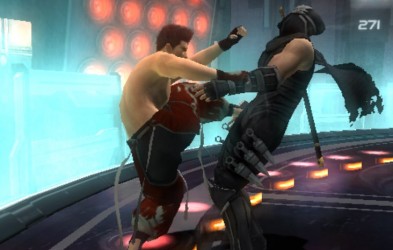 Don’t get too close to the edge!

I can’t avoid this fight!
DOA5+ finds itself in very good company on Vita, and while for me it fails to match the dizzying spectacle of UMvC3 or the tight, classic handling of Street Fighter X Tekken, it’s the most fun I’ve had with a 3D fighter for a few good years. Like its peers, though, it does fit the system remarkably well, with solid fight mechanics, smooth visuals and a stable, competent online mode.

It does, however, still surround itself with the same childish titillation it always has, even if it has been toned down somewhat, and that’s never going to be for everyone. Just know that if you can look beyond that, you’ll find an initially accessible, but ultimately deep, technical fighter that will impress right where it matters.