It seems to be the case that every other game is a shooter these days, and so it’s not surprising that every possible setting and premise has been exhausted. Almost. Going underwater is mostly uncharted territory for the genre, making Deep Black: Reloaded a pioneer in adventuring through the murky, unexplored depths.

Will it sink or swim?

Thrown in at the deep end
Deep Black does have a plot, apparently. This is news to me, because I had to Google the storyline afterwards; I could barely remember it. Here goes…

It’s a couple of decades into the future, and the world’s superpowers are at war; namely, the USA, Europe and Australia are all faced against China. You play Pierce, a retired soldier sent on a mission to rescue some hostages. Not far into the mission, however, and your General unapologetically informs you he was lying and you’ve actually been dumped into a far more volatile situation. A heavily-armed research lab, to be exact, with an incredibly dangerous weapon of mass destruction under development. Naturally, it’s all up to you to save the world single-handedly. 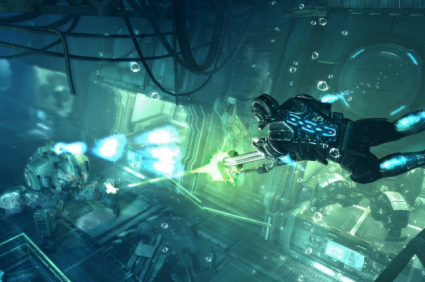 As far as futuristic warfare narratives go it’s as generic as they come, supported by equally generic characters and plot devices. Naff pacing and attempts at suspense result in a storyline that triggers nothing less than total apathy.

Take a deep breath…
Despite Deep Black trying to break away from the crowd with its underwater antics, there is absolutely nothing that sets it apart from all other games in the genre. Like a bastardised Gears of War, it feebly tries to emulate the tight, cover-based gameplay of better third-person shooters and fails in almost every way.

To start with, the game is a chore to control. Controls are clunky and inelegant, with no user-friendly concessions like neatly sliding into cover. These control problems become compounded when underwater, with 360 degrees of direction to wrestle your character through. Moving horizontally is awkward but manageable; going up and down is a real challenge. This is particularly unwelcome considering that you regularly have to navigate through underwater obstacles and streams of bullets.

Frustrating controls are one thing, but these could be forgiven if the other elements of the game were any more enjoyable. It feels too much like you’re going through the motions, wading through environment after environment that look identical to the previous ones, and following tedious objectives such as: ‘press a switch to unlock a door/change the water level/blow something up’. 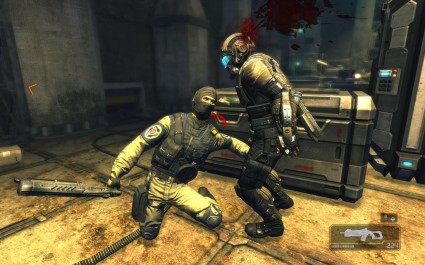 Oh, my. I'm not quite sure what's happening here. Moving on...

Guns spray with no recoil or sense of conviction, taking a considerable amount of bullets to kill each enemy. Your unimpressive selection includes a slow-firing pistol with unlimited ammo that might as well be firing potatoes; an impotent shotgun that’s practically useless even at close range; and an SMG and assault rifle that are probably the least incompetent weapons of the lot, despite still being rubbish. So you’ll be sticking to these often, begrudgingly.

The oldest cliché in the book makes an appearance; explosive barrels, and in copious supply. That said, despite their ridiculously overused existence in shooters, they’re probably one of the most satisfying aspects of the entire game in this case. Other alternatives to the typical dross shootouts include encounters with underwater drones that trigger the exact same irritating animation sequence and ‘mash B to win’ gameplay every damn time. Yeah, I’d rather be shooting barrels. Boom.

It will probably come as no surprise to hear that enemy A.I. is completely moronic, including goons that run around helplessly into gunfire, contrasted by ones that refuse to move at all. Both humans and automated turrets alike have a tendency to endlessly shoot at the walls you’re hiding behind, some of which let bullets straight through. 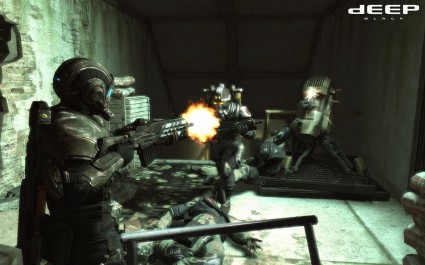 In fact, Deep Black is simply plagued by nothing but poor design and execution throughout. Difficulty fluctuates more often than a hormonal teen’s moodswings, ranging from unchallenging to completely unfair. Player health is not substantial, nor well indicated, leading to frustrating deaths.

What’s crueller still is the dire checkpoint system, spacing game saves out in a sparse fashion entirely bereft of logic or mercy. Long sections with no saving in between are common, sometimes with a drawn-out, easy section followed by an encounter that’s hard as nails, forcing you to restart over and sit through the tedious part again. I thought torture was illegal these days?

Deep Grey: Regurgitated
From a technical standpoint, Deep Black looks good enough; especially considering that it’s a low-budget title. The water and lighting effects are the star of the show, albeit nothing to get over-excited about.

The real issue with Deep Black’s visuals is one of the main problems that pervades the rest of the game; a complete lack of inspiration. Environments are as dull and repetitive to look at as they are to play through, featuring dreary grey colour schemes, lacklustre design and resources that are recycled far too often. 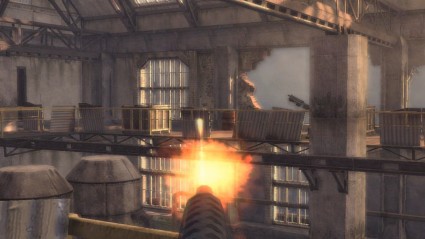 I lied; it's not all grey. There's quite a lot of brown, too.

On an unrelated note, animation can be a little wonky at times. The standout example for this is Pierce walking during cut-scenes, which looks extremely robotic and as if he’s trying to do lunges with every step. You would have thought that all the swimming would have kept him fit enough…

Rolling in the deep
If there are any prizes going for the most unprofessional aspect of Deep Black (and there are a lot of contenders), it would have to be presented to the voice acting. Any already-difficult attempts to take the game seriously are crushed entirely by the ridiculous bile spewed from the mouth of every single character.

From the embarrassing attempts at humour, to the cheesy mission briefings and the ludicrously overdone screams of pain, speech in this game is consistently facepalm-worthy. I personally encountered a bug where half of the cut-scenes were silent. Needless to say, I didn’t mind.

As for the rest of the audio, it doesn’t cause the same level of dismay but it doesn’t particularly leave an impression either. Gunshots sound feeble (although this is quite appropriate, to be fair), and the forgettable background music fails to impress.

A deep loneliness
Quite surprisingly, Deep Black includes a multiplayer mode. Much less surprisingly, it’s completely deserted. I know that multiplayer is an important selling point in the shooter genre, but for lower-budget titles their limited resources would be better spent making a better single-player mode, rather than a half-baked multiplayer that no one plays. 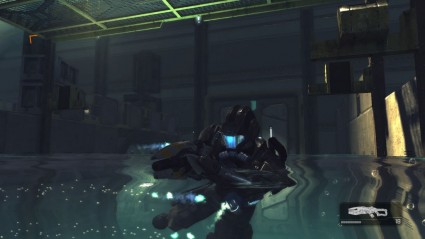 Guess I'll just paddle around here on my own, then.

Not that it particularly matters, but there’s a Deathmatch and Team Deathmatch mode to choose from, just in case you and several mates were all thinking of picking up a copy to play together. Which you really shouldn’t.

Deeply flawed
Sadly, Deep Black’s existence is largely redundant. It offers little in the way of originality or entertainment value, and consistently disappoints and underwhelms at every turn.

It’s situations like this where our scoring system works particularly well. If we used typical percentages, Deep Black: Reloaded would probably get a mediocre ‘40’ slapped on it. As we instead tell you whether to buy a game or not, the answer here is clear…