Fighting games have come a long way since I first discovered my love for Street Fighter II back in the 90s. From having just three or four special attacks per character back then, the genre is now bloated in comparison with lethal finishers, EX and Super Moves, complicated balance systems, umpteen hit-combos, stage-interactions and tag mechanics; it can be a daunting ask for genre newcomers to get to grips with it all. Divekick, however, is a game that rejects all those advancements and strips the fighting game experience down to two or three specific elements.

While Divekick actually started life as an inside joke from the competitive scene’s commentary that the diving kick (where a character can jump and then sharply descend with downward kick) is a cheap, overused tactic, it’s impossible to deny the lessons that this literal two-button fighter can teach players both old and new.

In West Philadelphia, born and raised…

Although now more of an actual game than the original vision for Divekick, it’s still every bit a parody of fighting games and the fighting game community (FCG). Every one of the thirteen characters’ signature kicks is based on a similar move from an established fighting game, while some of the roster bear likeness to particular competitors and personalities from the FCG.

With that, there are a lot of inside jokes that only those involved with the pro-circuit will get, and for those completely clueless it could even feel a little alienating to begin with. Just to give you an idea, I’m completely obsessive about fighting games, but I only half-heartedly follow tournaments like Evo, so some of the humour flew over my head too. That’s not to say you can’t enjoy what the game is getting at, though. 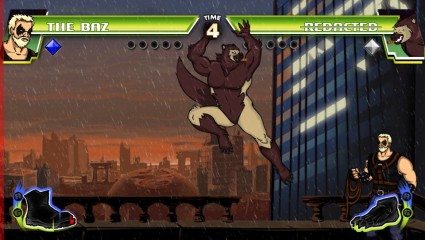 is a real beast…

The character’s back-stories are every bit as crazy as you’ve heard. The two titular divekickers, Dive and Kick (parodies of Street Fighter’s Yun & Yang) are both from West Phillie and are sent packing to live with Dive’s rich Uncle in Bel Air after their mother catches them in a fight. Redacted is a brilliant spoof of Wolverine and IP owners that threaten legal action on fan-made games, while Dr. Shoals is a female take on Dr Doom.

My favourite inclusion, though, is former Capcom Community Manager Seth Killian, making an appearance as S-Kill: a criminal organisation head who wants to rebalance the world and then sell it back to people repackaged as a new product. A clear dig at Capcom releasing many versions of the same game…

Death from above
So when you’ve read that Divekick is a two-button fighter, it really is just a two-button fighter. One button jumps, the other kicks. Hitting the kick button when grounded sees you hop backwards. These two buttons represent both your main course of attack and the only way to move around the stage.

Landing a hit doesn’t chip health away from your opponent as it would in a traditional fighter; there are no combos after all. Rather, it’s a one-hit kill in a ‘first to five’ match setup. This creates a unique sensation, as it replicates the absolute most thrilling scenario when playing fighting games: when both players are low on health, evenly matched and one hit from either fighter will win it.

The game does have some systems outside of its most basic mechanics, though. Firstly, every character has a different type of divekick, so you have to adjust your strategy depending on who you’re playing as or against. Helping to temporarily increase your speed is ‘Kick Factor’ (an obvious nod to UMvC3’s X-Factor), which automatically kicks in once you’ve filled the meter at the bottom of the screen by jumping and kicking lots. Characters do have one special ground and air attack apiece that can be activated by hitting both buttons at the same time; however, the pay-off is that they cost Kick Factor. Also important is the art of bagging headshots; kicking an opponent square in the head will result in them moving a lot slower for a short period in the next round.

There is a total piss-take of Street Fighter X Tekken’s Gem system, allowing you to boost your dive or kick stats, as well as the YOLO gem that allows you to go into a fight already four rounds down. Just for bragging rights, of course. 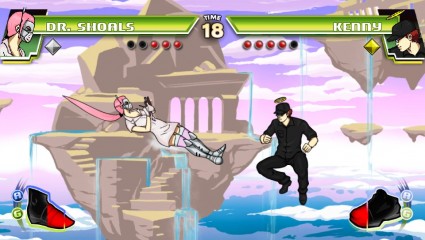 Someone’s about to kick it.

Due to both its set-up and limited mechanics, the game does admittedly make for some truly awkward viewing if you’re spectating; that’s completely unavoidable. If you’re not seeing beyond that, though, what you may miss out is that the game is highlighting three key lessons of any fighting game: spacing, timing and posturing. These are invaluable things to learn.

When you win in Divekick, you’re not doing so in a flurry of fists and feet, or because you’ve memorised that 20-hit unbreakable combo, but because you got the basics right; because you had the right distance between you and your opponent before striking; because you timed your attack perfectly or because you tricked you opponent into making a move too soon or too late. When you lose, it’s because you failed at fighting game basics and it’s never disheartening as a result. This is the game’s genius.

Fraud detection warning
Although bright and colourful with some great, Adult Swim-style art on display (I particular enjoyed the characters’ intro movies), it does unfortunately all look a bit like a Flash game. Animations are rigid, but really what else can you in a game where the only real notable motions are to jump and to kick?

It all adds to the game’s charm, however, and is consistent with its theme of stripping the genre back down to its most basic level. Plus, it’s hilariously awkward to watch in motion. Seriously, just look at it!

It also wouldn’t be a complete parody without a stereotypical announcer, and Iron Galaxy’s chosen voice-over perfectly suits the game’s general silliness. 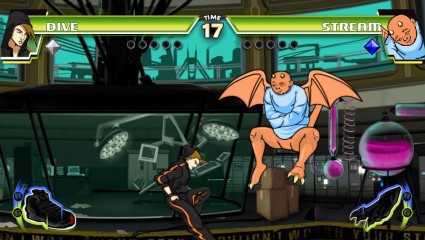 Stream (the dude on the right) is based on the internet troll.

Multikick
A basic online experience made up of Ranked, Non-Ranked and Private Lobbies awaits you in Divekick, but it’s a smooth experience thanks to the GGPO netcode that so many fighting games rely on these days.

Mulitplayer is where Divekick really comes into its own too, with the genre’s trademark mind games coming to the forefront of the experience. Although simplistic, predicting and second-guessing your opponent is just as intense here as it is in the final few blows of any other fighter.

Divekick?
The one negative thing I’ll say is that it does take a little time to see Divekick’s true appeal beyond its minimalism. Even I, as someone that had been fervently looking forward to it had an ‘it’s not as great as I’d hoped, is it?’ feeling over the first ten-to-fifteen minutes. I kept playing, though, and the more I did, the more I revelled in the brilliance of its intrinsic simplicity.

It’s that simplicity that really does allow anyone to jump in, pick any character and hold their own. It’s the perfect option when you want to play a fighter with mates and not have anyone feeling alienated by their skill level. It’s the perfect option for someone to learn some genre basics without being intimidated by stacks of complicated systems or having one slip-up lead to an embarrassing pummelling. Inside jokes notwithstanding, it manages to be a viable option for absolutely everyone.

My only question pertains to its long-term appeal; will people still be playing it in a few months or a year? Of course, we can only answer that later on down the line, but even if it’s only remembered as a short-lived novelty, it’ll be remembered as a bloody enjoyable one.