Let me start by saying I love point ‘n’ click adventures. Good ones at least. I grew up on Broken Sword and have recently sampled the joys of Monkey Island and Beneath a Steel Sky, all series that are just as playable now as they were back then.

Despite a shaky period with a fucking awful attempt at turning Back To The Future into an adventure game, this year Telltale blessed us with The Walking Dead Game, likely the best adventure game in recent memory. It may even spell a resurgence for the genre, and with Double Fine Adventure and The Cave on the (admittedly distant) horizon, there’s certainly excitement building for the return of one of gaming’s most beloved and missed genres.

This open brown-nosing of the adventure genre is not really my style, but in this case it serves to highlight how great the genre can be and to make the rest of this review seem all the more condemning. Edna and Harvey: Harvey’s New Eyes (HNE) is literally an offence to the genre. It’s a giant middle-finger salute to the hard work and brilliant creativity of the greats and it’s adding horribly to the growing number of shoddy, pathetic and worst of all apathetic adventure games that are giving genre-detractors fresh ammo on a weekly basis.

Why can’t you talk?
After that floral opening you can probably guess where this is going. HNE is apparently a sequel to an equally crap game, but as playing this one was tantamount to taking a cheese grater to my frontal lobe and it’s actually supposed to be better that the first, you’ll forgive me for not feverishly seeking it out for research purposes.

The story on offer is instantly boring which is, I suppose, an achievement of sorts. Some mute girl called Lilli lives in a convent, or a kid’s home, with an almighty bitch of a nun constantly screaming orders at her and a bunch of freaks and miscreants who also live at the convent/kid’s home and essentially take the piss out of her for being stupid and mute. Lovely story then.

The problem is, with Lilli being mute all the other characters have to talk through things for her. This leads to instantly annoying exposition that forces you to click conversation-starting pictures to sort of nudge the NPC towards helping you out. Conversation is probably only second to random item combining in the adventure game toolkit, and taking it away fucking ruins the experience. 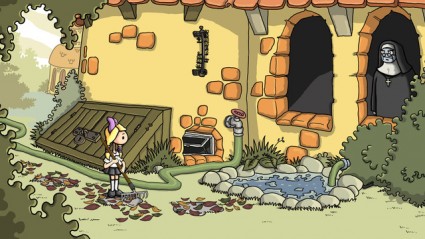 The titular Edna is a lanky and freakish girl, a bit older than Lilli I think, who appears to enjoy digging in mud and making Lilli do everything for her. She has about as much personality as a washing-up sponge. When a title character is so boring that eating broken glass is preferable to chatting with them, you know something’s very wrong.

Apparently the boorish plot opens out later on and has something to do with Lilli being so thick and naïve that she inadvertently kills everyone she knows. I never got that far, so mind-numbing was the opening section. If a game bores me to tears within the first few hours, why should I waste my time ploughing through it just to reach some supposedly climactic end-game?

Oh God, just DO WHAT I TELL YOU!
Controlling the game is as you’d expect: pointing and clicking. However, due to the bizarrely shit engine developers Daedalic Entertainment have used, everything looks like a bad animation and nothing is quite as simple as you think. You click an item wanting to use it and Lilli walks to it. So you click it again and she just sort of wobbles in place. There’s random yet very specific areas on all the objects that have to be clicked to activate an action.

Even when you do manage to get Lilli to do something other than make stupid noises, she’s so incredibly dim that you’re amazed when she actually does what you ask. Tricky control isn’t usually a game-play mechanic of the adventure game, but here it’s an unfortunate layover of irritating scripting.

It’s like Daedalic figured players would enjoy raking leaves for five minutes, watching Lilli just move them from stone to fucking stone before the evil, angry nun shouts at her for being shit and tells her to do something else. The mind boggles.

Puzzles are just as out-there as you’d expect from an adventure game,although HNE takes it to some mad, new level. Seemingly entirely random objects need to be combined or used in a nonsensical order to progress, while common sense and logic seem to be completely useless.

It’s hard to describe actually playing HNE in words, so I’ll do the usual and fall back on an overextended analogy. Imagine you’re in a waiting room for 10 hours; it’s boiling hot and you haven’t eaten since before you arrived. You’ve got a banging headache, your arse is killing you from sitting on the rock-hard plastic seat and you forgot your book.

Staring at the wall, your mind has numbed, the monotony of the situation seizing up your synapses. All you want is to progress, to finally be seen by whoever you’ve come to see. You pray for a bottle of water to come rolling across you vision, or a packet of smoky bacon to be dropped by an absent-minded pensioner as she wanders through the waiting area, or even the end of all life on Earth. Anything to break the crushing boredom wrecking every fibre of your being. 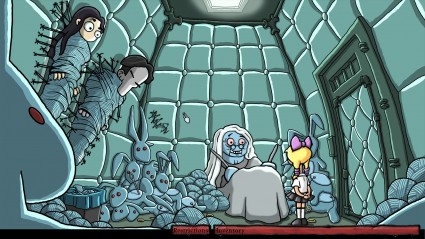 You'll likely end up somewhere like this after attempting to play this game. Oh, the irony...

Then, from somewhere, a tiny fly emerges. It buzzes over to you and begins circling your head. You attempt a few meagre swipes to bring it down, but to no avail. The fly has beaten you already and you know it. Even so, its incessant buzzing and circling begins to grate, slowly scratching at your mind, chipping away at what little resolve you have left. The little thing flies in your ear and you snap. The next few minutes are blurry and immemorable but when they’re over you’re standing outside the building you were in. A quick look back reveals a scene of bloody slaughter, mass criminal damage and arson.

Paper cut-outs are SO 2008…
Graphically, HNE also sucks. Essentially colourful kid’s drawings ‘animated’ in the most basic sense of the word help flesh out a boring and unappealing world. The animation reminds me of those cheap kids cartoons of the 90’s, where you would be genuinely wondering if they had a budget at all.

The art style could be described as ‘artistic’ or ‘avant-garde’ almost, but I prefer ‘fucking awful’. People look like people after they’ve been stretched in some horrific way, except the evil nun who appears to have no waist, feet or neck.

South Park was designed on craft paper and is intended to have shoddy and choppy animation, yet it still looks and feels about a thousand times better than this awful shite.

Just shut up
God, the sound. Any music in the game appears composed solely to drive home the irritation and make me literally want to kill the composer.

The voices are terrible, with over-acting being the chief sin and apathy being the secondary. It’s as if the voice director just told all the ‘actors’ to imagine they were talking to kids with learning difficulties and to patronise them to Hell and back. It makes you feel like you’re being spoken down to by characters who barely resemble human beings. What a fucking joke.

I suppose the world sounds are passable, although that glimmer of light is filtered by the fact that all the background noise tracks are just ten-second loops. You hear the same bird, bee and owl thousands of times, and considering the amount of time you’ll spend attempting to navigate the various areas you can imagine how annoying it gets.

Now I need new eyes…
Well there you go. I don’t think I’ve played a game in the last ten years that has failed to justify its existence so quickly and so epically as HNE. An insult to the genre and gaming in general, this is the sort of shit we need to have less of. Apathetically made, poorly implemented and an absolute chore to play even for a short time, I cannot believe they’re charging £15.99 on Steam for this shit. You could probably pick up Sleeping Dogs or Dragon’s Dogma for that these days.

Be warned, fair gamer. This game is fucking awful and if it ever comes anywhere near you, grab the nearest heavy object and put it out of its misery. You’ll be doing it a favour.