With FIFA Football on Vita earlier this year, EA managed to buck their trend of horrendous console launch ports. They provided a portable footballing experience that, although a few modes short, felt complete and played every bit as good as the home console version. I was expecting great things from the next instalment.

Déjà vu
On the back of the box, FIFA 13 boasts its status as the most feature-packed handheld FIFA ever, but aside from a few gameplay and performance tweaks, you’d be hard-pressed to tell the feature set apart from FIFA Football.

For example, the home console FIFA 13 finally did away with the Arena this year, presenting a far more useful training exercise in-between loading screens. The Vita offering retains the exact same arena system as the game released earlier this year, even with the same designs and assets.

The game modes on offer are identical too, with a standard Career mode bolstered by Be a Pro careers for outfield players and goalkeepers respectively. I ploughed a couple of hours into all these modes, but I really struggled to tell any meaningful differences to FIFA Football, outside of up-to-date rosters and upgraded kits, of course.

It’s a massive shame as this year’s home console equivalent really impressed me with its list of features. Ultimate Team was included from the off, while the Match Day mode is proving to be a massive draw for me. Imagine having the ability to download that week’s Match Day data and then play those matches on the move. Why is there no way to link your PS3 season with the Vita, to carry on managing your team while at the bus or at work?

Instead we’re left with base-level features, when the bar for portable sports games could have been raised that bit further. I was hoping for far more. 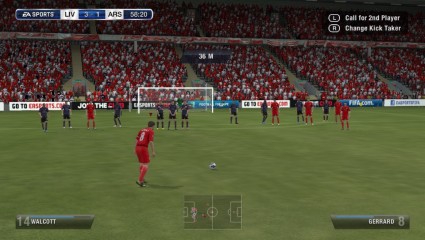 Swipe the screen in the way you want to strike the ball!

Nothing if not subtle…
Subtle changes are slightly more noticeable on the pitch, with the game feeling a little quicker and the controls more responsive, but it’s hard to tell if there’s any meaningful work been put in to redeveloping how it plays.

One of the major successes of FIFA Football was its touchscreen implementation. Players could pass the ball by simply tapping on an open man, and it worked pretty well, despite the need to shift your hand. In FIFA 13, it’s been taken a little further, with gamers able to pass the ball into open space and thread through balls with a touch of the screen. As a system it works, but I ended up sticking to the tried-and-tested triangle button.

The biggest success in the prior game was in using the back touchpad to shoot; if you wanted to aim for the bottom left of the net, you could simply hold the bottom left of the back touchpad until you found the right power, and release to shoot. This mechanic remains completely unchanged, and although I didn’t use it that much in general matches, I did use it a hell of a lot in the Be a Pro mode. EA have also added the option to use the front screen in the exactly the same way; although with the added trouble of shifting your hand from a holding position, it’s a little awkward in comparison.

Much of the work done on FIFA 13 on Vita has simply been in performance. It loads quicker, runs smoother and it’s a better navigation experience as a result. This is especially true of the Career modes, where processing the other results from non-match days used to be a lengthy, boring process. They now run a little quicker, making it less painful. 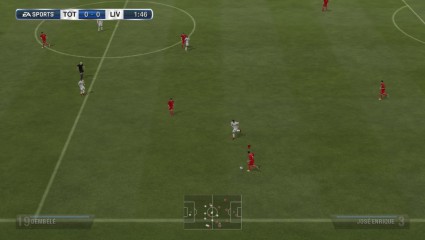 New season, new kits, and that’s about it…
New kits are pretty much all that separates FIFA 13 visually from the previous game. Almost every other asset is reused, except for a new intro and start screen.

The good news is that it still looks the part and runs smoothly. Graphically it’s not too dissimilar to the home console ports, with players looking enough like their real-life counterparts. Many of the big name players have their own characteristics, so when someone like Messi or Gerrard get on the ball, you generally know immediately who’s in control.

The framerate has seen a bit of a fix at least, no longer dropping frames when the action is on the far side of the pitch, making for smoother gameplay.

Rewind, can’t be kind
While you expect certain assets to be reused in games like this, you certainly don’t expect it of the soundtrack. That was the first thing that hit me here, as the opening song that greeted me was on the previous game, despite not appearing on the EA Trax list. It was mostly that which led me to believe I’d accidentally put last year’s cartridge in the slot. The rest of the soundtrack is still smaller to that of its bigger brothers, but adds an element of style to the menus.

The commentary is also completely unchanged, lacking the improvements that the home console game has seen. This means no new points of discussion between Martin Tyler and Alan Smith about club’s real-life situations, nor is Alan McInally intervening to let you know other scores. 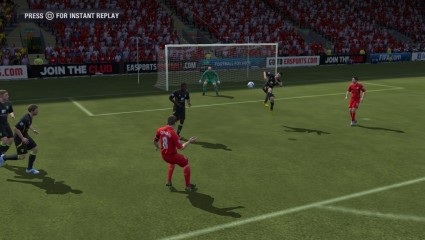 Fever pitch…
Once again, FIFA proves to be a solid online experience, but it’s definitely pushing no boundaries. From the online menu, you can jump straight into straightforward head-to-head games, join in leagues, and that’s about it. There are no options for Be a Pro fans here.

The net code holds up pretty well again, and although I did experience some occasional lag here and there, it’s unavoidable on a game like this.

Maybe next year?
Given that just a few months separate the two releases, maybe I shouldn’t be so surprised to see how little as changed, but I have to say that after FIFA Football’s strong start earlier this year, I was really excited to see how things progressed in FIFA 13. Unfortunately very little has; it’s practically the same game.

If you do already have FIFA Football and you’re not at all bothered about the superficial details like updated Rosters and kits, then FIFA 13 on Vita becomes a tough game to recommend. You could quite happily give this a miss and hope for more of an effort from FIFA 14.

If you haven’t bought the previous game, however, you’ll find FIFA 13 as the best portable FIFA money can buy. If you’re in that situation, give it a look. It still plays a great game of football, but just be aware that it’s pretty much the same game of football.