EA have something of a nasty habit. Whenever a new console launches, they tend to push out a rushed, half-baked port of FIFA. These ports are usually lacking anything in the way of decent features, solely to make a quick buck on the excitement of new hardware, while having the sheer gall to charge us full price for the privilege.

Somehow, when the 3DS hit shelves last year, they waited and produced what I declared as ‘probably’ my favourite handheld version of EA’s flagship sports title, even without an online mode. This statement is no longer true.

Much to my surprise, FIFA Football, the obligatory launch port of FIFA for Playstation Vita, is very nearly everything the home console versions have been for the last three years.

So much to do, you’ll need a winter break!
From the moment the game is booted, you can tell that this is a handheld port of FIFA like no other. You’re taken straight into the Live Arena from the home console port, an urban football pitch with your outfield player of your choice versus the goalkeeper of your choice, allowing you to kill time before you take to the menu. Yes, it still uses this while matches are loading too, making load times fly by, simply because you’re still interacting.

The menu system is also practically identical to FIFA 12, and is surprisingly full of things to do. Here you can access Friendlies in both the standard and Be a Pro modes (including goalie). You can take part in the standard, expected tournaments, while the Career modes see you living the life and career of a single player, a manager via the standard FIFA gameplay format, or you can take on both roles at the same time, if you so wish. I’m extremely pleased to say that you can head online too, albeit only in standard football matches.

Unfortunately there’s no Ultimate Team, though who knows… DLC? 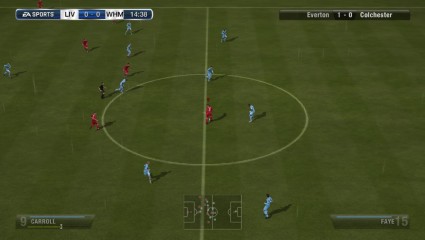 The game runs decently from up-close or far away!

Everything about the way the game plays is identical to FIFA 12 on 360 or PS3. The weighting of the players, the passing, the shooting, all perfectly replicate the core versions. They have, however, made good use of some of the Vita’s new features, and I’m pleased to say that all of these are entirely optional.

The first to mention is touchscreen passing. Got the ball? Simply tap the player you want to give it to. It works well, but you still have that issue of covering the screen with your hand, which in a game of 360 awareness can be a little fiddly. I gave it a fair go and it’ll be the preferred option for some, but personally I stuck primarily with the manual method.

There’s a similar technique available here with defending. If there’s one one thing I hate about all football games, it’s when the game will give you any defending player but the one you want. To combat this, you can use the same technique as passing; just tap the player you want to control, and he’ll be selected. Again, this works well, but I only found myself using it occasionally as by the time you’ve moved your thumb to tap the target, the game will have usually have given you the player you wanted.

By far the best new feature is shooting using the back touchpad. It takes a little while to get your head around and get to grips with it, but essentially you treat the touchpad like the face of the goal. Think of the old ‘Spot the ball’ competitions. You want to shoot for the top right corner from a distance? Hold down your finger in the top right (that’s your right, not the touchpad’s) and let go once you think you’ve got enough power. One-on-one with the keeper and want to slot it slightly to his left? Same principal, just with a lighter touch and a finger placed lower and more centrally. 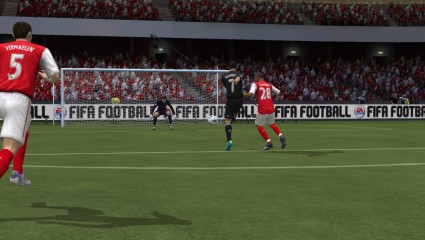 Want to shoot? Try using the back touchpad!

This works really well once you get the hang of it; however, I did finding myself sticking with the buttons for most part, in traditional FIFA matches at least. When it came to Be a Pro, I found myself using it much more thanks to the camera angle providing more context, and the mechanic does offer you total control of where you want to place the ball.

Free-kicks can also be taken with touch controls. The most advertised option is to draw the curve you want onto the front screen. This again works well, but it’ll take some practice before you’re knocking them in left right and centre. Of course, if you’re definitely looking to shoot, your other option is to utilise the back touchpad again, in exactly the same way that I described above. Again, this is all optional; you can resort to manual buttons if you want to.

Be a Pro mode is also not the gimped affair it was on the 3DS, and if you’ve played it on 360/PS3 then this is the proper version that you’re used to. You pick your player (your own created one, if you’re in the career mode), and play their position the best you can by holding your position and using the ball well when you have it. Each position has its own priorities.

Attackers, for example, will need to stay at the top of the pitch, watching their position, be a nuisance to defenders and shoot when they can. Midfielders are there to win the ball, pass it along and help set up attacks. Wingers should keep wide and try and whip crosses in at every opportunity. Goalies will need to watch their position and time their saves perfectly if they want to keep a clean sheet, while they can call out pass suggestions to the outfield players. You get the idea; each position has different objectives.

At the end of the match, you’re judged on your performance. In the Player-only Career, it’s these performances that will determine how your career progresses, and which clubs will try and sign you. It’s such a good mode, though if you’re in a good team, tending goal can be a bit boring at times.

With three variations on the Career mode, nearly every competition in world football to enter at a whim, there’s plenty to keep you busy. 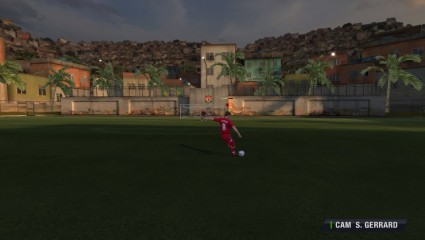 The Live Arena is on the handheld!

Never has the term ‘beautiful game’ been more poignant…
FIFA Football looks absolutely lovely in motion, and although the extensive animations might occasionally drop a frame, the gameplay never suffers for it. At a distance, the detail is light, but up close and personal, player models look at least impressive enough for this first Vita outing. Unlike the 3DS version, there are different styles of player animation too, once again showing off the benefits of the new platform that EA had to work with.

The only issue really are the stadiums; with no crowd animations they look a little stilted and lifeless, but otherwise, they’re all lovingly recreated and look fantastic in the directed pre and post-match shots.

Cracking atmosphere
The quality of sound also matches up to that of the home console versions. The crowd sounds alive and active even if visually they aren’t, chanting and singing their club songs as you play. My one complaint is that sometimes it only seem to have one, extremely high level. It never seems to dip during quiet periods, sometimes lessening the impact and excitement of a goal.

The commentary is standard fare now, but again it’s totally in-depth, exactly the same as the other versions. Martin Tyler and Alan Smith provide excellent descriptions of what’s going on, while it’s only their general chit-chat on the state of the playing teams that ever feels like it’s repeated ad nauseum as you play.

A decent but limited soundtrack helps the tedium of navigating the menus, with the likes of The Hives, Foster the People and Crystal Castles among the seemingly paltry number of eight tracks to choose from. Unfortunately you can’t bolster them with your own music stored on your Vita either. 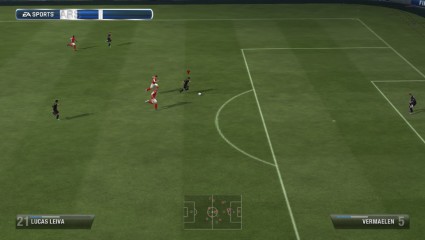 This is isn’t football, this is war!
I was delighted to discover that FIFA Football for Vita came with an online mode, and it’s pretty decent all round. Unfortunately you won’t find any Be a Pro games (or 11 vs. 11 games, subsequently) but you’ve got more-than-competent traditional matches.

These work brilliantly. Only occasionally did I have to battle lag (as comes part and parcel of online gaming), and although I had preconceptions that players using the touchscreen controls would be at a slight advantage over me using the traditional controls almost exclusively, it certainly wasn’t the case.

Thankfully, there’s a little more to do than just endless friendlies, as you can create and join leagues or jump into a match lobby to make the experience slightly more social. It’s entirely up to you how you want to experience the online mode in this respect, but in the fundamentals it’s always the same, solid experience.

Top of the league?
I really can’t praise this effort from EA Sports enough; it’s a cracking little port that hits all the right notes. Not only do the new features at least offer viable and practical alternatives to the standard control schemes, there’s lots to achieve and the online multiplayer will keep you coming back for months to come. More importantly, it just plays a great game of football, regardless of how you want and choose to experience it.

With this one shot, EA Sports haven’t hit the bar; they’ve raised it. For handheld sports games, that is. I thank you for sticking with that terrible analogy.