God of War III: Remastered is, as the title heavily implies, the remastering of God of War III – a Playstation 3 exclusive released in 2010. It tells the story of quite possibly the angriest protagonist ever created, Kratos, as he continues his quest for revenge after some naughty ancient Greek gods tricked him into killing his wife and child.

With little to nothing added to the game, it’s hard to see why this remastering was even needed. As it is, God of War III: Remastered only serves as a reminder that the action-adventure genre has moved on in the five years since its first release, and so too has video game storytelling.So this is the crux of what I have to say about this being an update of any sort – it’s not. This is God of War III. There’s nothing new, there’s nothing that’s been changed and there’s nothing that’s been markedly improved. So this puts me in a tricky spot. What does this review need to do? I mean, there are countless God of War III reviews out there and odds are that if you’re interested in Remastered, it’s probably because you enjoyed the original God of War III.

So, what follows is basically a review of God of War III which I happened to be able to play on my PS4 five years after it was first launched.

Even considering the age of God of War III, it still looks good. I remember thinking it looked great on my PS3, but now I think it looks good on my PS4. Maybe my bar’s low, but I still enjoyed the scale and spectacle of it all. Kratos, the angriest person alive, starts off the game riding on the back of Gaia – the mythological titan – as she climbs up the side of Mount Olympus looking to duke it out with Zeus.

At points in this early section, the camera will zoom out so far the Kratos is barely a speck on the screen, and yet the scene is still filled with giant titans fighting Greek gods as mountains crumble. It’s all very ‘epic’ and a visual treat. This sort of all-out action and grandiose scale does slow down a little as the game progresses, but you’re never far from a big set-piece kicking off and giving you something to look at. 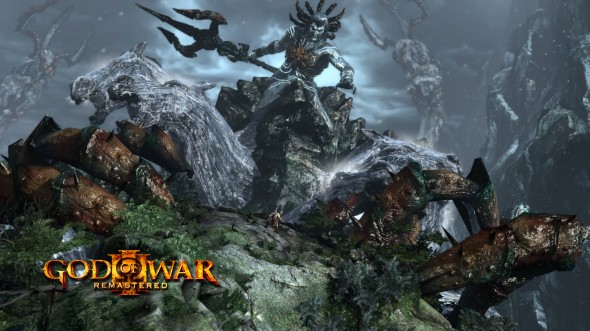 Can you even see Kratos in this? The scale’s impressive; fighting as a single pixel isn’t.

So whilst the graphics don’t appear to have dated badly, the same can’t be said for the rest of the game.

The combat is something that stuck out immediately. After playing games like DmC, Bayonetta 2 and the latest Batman: Arkham Something, it’s hard to say that, by modern standards, God of War III’s combat is good. Enemies will attack with little warning, meaning that parrying an attack feels more like luck than skill. On top of that, the previously mentioned cinematic camera can hinder your ability to get a long combo going, as you sometimes end up fighting enemies that are just around a bend or the director will decide to zoom out just when you’re trying to land a finishing blow.

Another frustrating factor of the game’s combat is the rate at which new weapons are dished out. They’re handed out far too slowly and offer little variation in how you play. Some enemies might need you to use a giant fist weapon to destroy a shield of theirs, but aside from that, there’s no real difference to the enemies you fight in minute one to the enemies you fight in hour seven.

Even the big battles are, from a gameplay perspective, a little disappointing. Most bosses simply spawn lots of minions and then descend into a very trivial series of quick-time events. Whilst these look amazing, simply following instructions that appear on screen doesn’t make for a very thrilling climax to any battle. 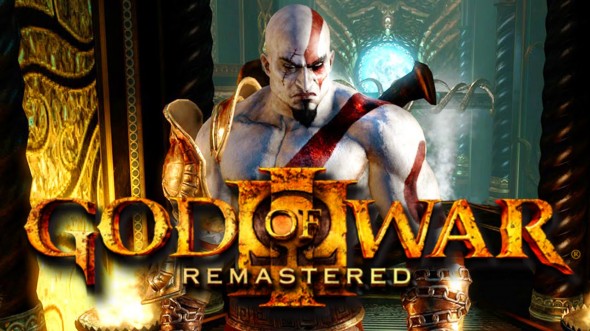 Nothing makes Kratos madder than messing up a combo. That’s why he’s constantly mad.

The only other thing to do, aside from fight, is traverse levels and solve some environmental puzzles. The platforming aspect of God of War III isn’t exactly a strength, as everything’s laid out in a fairly linear manner and getting from one fight room to the next isn’t a challenge. True, the rooms and areas you’re jumping and swinging around in often look nice, but things don’t become interesting unless there’s a puzzle to solve.

These puzzles often see you pushing one block into a block-shaped hole but they’re a good way to break up the relentless fighting conveyor-belt that is the rest of the game. It also helps that Kratos uses his immense strength to push around blocks at great speed, so these sections don’t feel like they’re slowing you down.

Occasionally you’ll veer from the most obvious path given to you through the fixed camera angles and stumble upon a chest that contains some red orbs. These can also be gained by defeating enemies and they’re used to power-up the weapons and items you’ve previously acquired. Don’t get too excited though, as even though you learn new moves as you improve your gear, there’s never anything unlocked that changes the fighting in any meaningful way. 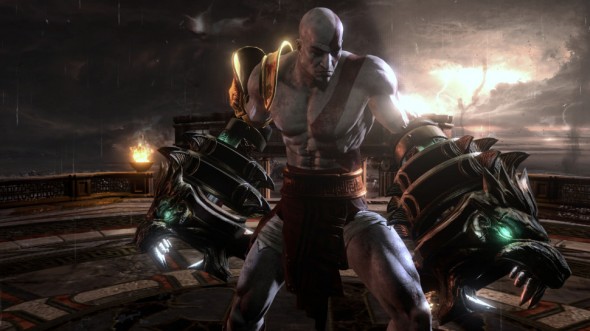 I’ve mentioned how well-presented the game is, not just in terms of visuals, but the team behind God of War III clearly know how to use the camera to create something that looks great, even if it does cause some issues whilst in the heat of combat. So it’s safe to say that the visuals of the game have a cinematic quality to them; it’s a shame that other elements of cinema, such as plot and character, are sorely missing.

As already stated, it’s hard to know if it’s the game that’s aged poorly or if it’s my tastes that have changed, but the story of God of War III is worse than I remember it. To be fair, the tale of revenge is a good enough excuse to travel around mythical locations such as Mount Olympus and Hades. The main issue with the game’s story, however, is the characters. They’re all, without exception, awful and actively made me fear the next cut-scene. Kratos is stand-out in his awfulness as all he does is nothing but shout and yell and scream. He’s entirely unsympathetic and doesn’t seem to have any clear code of conduct throughout the story.

One moment you’ll see Kratos get angry and shout a lot as the evil Zeus threatens to hurt a young woman. Rightly so, Kratos, you tell that nasty God. Oh, wait a minute – in a previous scene, Kratos finds a young woman chained to a wall and he cuts her free. That seems consistent enough; maybe we can get behind this loud idiot. 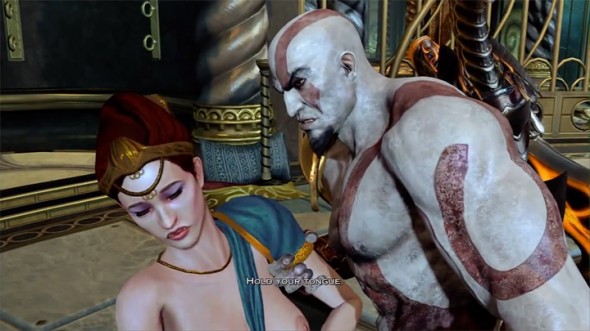 No. The woman he rescues, she cowers in fear and begs not to be hurt. She’s then used to solve an environmental puzzle. Much like the large blocks you use elsewhere, this woman is nothing more than a object to be thrown into the right location to solve the puzzle. Kratos grabs this woman by the back of her neck and shoves her in the direction he wants her to move. All the while, she’s sad and terrified about the whole situation, audibly so. The culmination of this poor woman’s ordeal is that she’s used to prop up a large mechanical wheel which is needed to be held up so Kratos can walk through some gates. She protests that the weight of this wheel is far too heavy, “Please Kratos, there must be another way?” Nope – Kratos cares not, he saunters through the gates and you hear a scream and a crunch. The woman has been crushed. Did I mention the woman had her boobs out the whole time? Did I mention that all of the women in this game either:

It’s strange to say this about a game only launched 5 years ago, but it’s starting to show its age. It’s hard to tell if games have started to grow up or if I’ve grown old, but God of War III: Remastered is hard to recommend unless you’re a die-hard Kratos fan. Heck, if you’re a die-hard Kratos fan, you might spoil your fandom by revisiting this. Perhaps play DmC, Bayonetta or Batman instead?