What do you look for in a game? Are you all about mechanics that take an age to master, but ultimately give you a rewarding feeling once you’ve got a grip on them? How about a multiplayer experience that allows you to dominate others? How often, though, do you look for a game that simply tells a story?

Not very often I’d imagine. This is probably down to the fact that most stories in games are at best ‘okay’ and at worst ‘awful’. It also doesn’t help that most games force feed you their narrative in the form of cut-scenes. Luckily for Gone Home, its story is touching and relatable and its execution is compelling.

Here’s why I think you should play Gone Home.

Gone Home focuses on one family; the Greenbriar’s. They’re fairly typical, I suppose. A husband and wife along with their two daughters. One’s gone off to Europe whilst the other is struggling to cope with being a teenager, moving home and subsequently being relocated to a new school. What, you were expecting a story about saving the world? 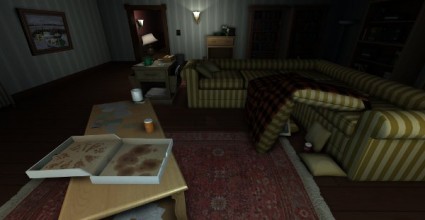 Can you save the world… from this pizza box?

Gone Home revels in mundane details. You find out that the Mother has got a promotion. The Father’s had two books published though has had to resort back to writing reviews (the lowest form of writing) and the house they’ve all moved into was inherited.

To go into a huge amount of detail with what the story is about would be to ruin the game for you. The game is the story. I’ll try and be vague when I say it involves growing up, not fitting in, finding yourself and increasingly becoming distant from a family that wants to help but simply can’t. Pretty much anyone that’s been through puberty will find something to relate to.

There’s no aliens, no explosions and no ‘fate-of-the-universe’ type stuff here. This is a family dealing with things that a family deals with.

Getting home
What the game actual game plays like is as follows. It’s a purely first-person affair where you wander around the seemingly abandoned family home. Playing as the older of the two daughters, you arrive back from your European trip to find that everyone’s missing. With no welcoming party whatsoever you set about trying to figure out what’s happened.

You can click on things to interact with them and examine any objects you pick up. 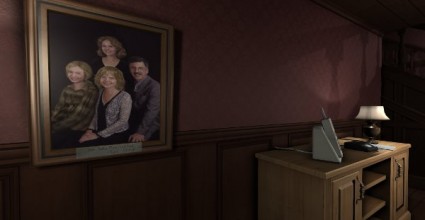 It’s also nice to see a game treat you with some intelligence. The game’s story is its main selling point, yet it never forces the tale down your throat. There are plenty of open-ended and ambiguous interpretations to what’s happened and they’re all gathered through the items you’ll encounter. Again, assuming some intelligence on the player’s part, the items aren’t lying in the middle of the floor. To ge the most out of the game you’re going to have to hunt through the mansion with a fine-tooth comb, read a whole lot and read between the lines a couple of times.

Home decor…
To say the game’s a graphical masterpiece would be a lie. Technically, this isn’t very impressive. Good, but not great, 3D models litter the homestead and moody lighting create an entirely tangible atmosphere.

What the game lacks in technical brilliance it makes up for in attention to detail and a commitment to fully realising this family’s home. Posters on the walls, calendars with dates and VHS tapes with hastily written labels covering them. It all adds up to really draw you into this entirely believable world.

Get to home
Along with the game’s visuals sucking you in, it’s also worth mentioning the fantastic audio work that makes Gone Home such a compelling experience. Narrated by the younger daughter of the family, the story is really hers and it helps that her voice-actress does a brilliant job with the dialogue.

Nothing says atmosphere like a TV left on in a dark room.

It doesn’t stop with the dialogue though. You’ve got a moody soundtrack that plays along and is so quiet that it’s easy to not even realise it’s there. On top of that, the game takes place in the middle of a terrible storm, so naturally every new corridor you stumble through is accompanied by booms of thunder.

As the game’s all about rummaging through the family’s possessions, occasionally you’ll find tapes. For the kids out there, tapes are like CDs you can rewind. For the younger kids out there tapes are like MP3 files you can hold in your hand, get jammed up and require you to wind a pencil through a hole to get them working again. 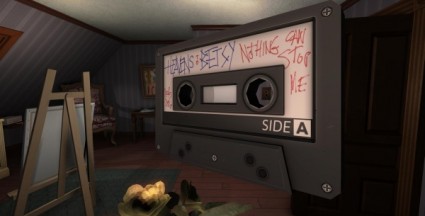 These are ‘tapes’. They contain music or sometimes games. Ask your grandad.

One of the big ‘holes’ within the game’s logic is that you have to believe a family would seriously leave all of this personal information just lying around. It makes for an extremely convenient, well crafted and well written series of plot devices. 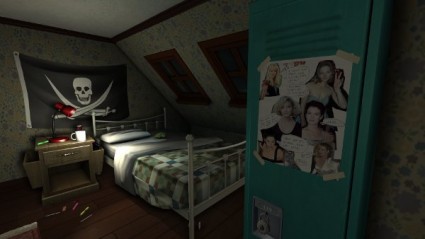 Ever wanted to wander around a virtual teenager’s room? Don’t answer that…

Another negative to the game is its length. I think I clocked in about two hours with the game. For £13, you’d hope for something a little more substantial than two hours worth of gameplay.

Even with this literal shortcoming, I highly recommend you play Gone Home. It’s unlike anything else I’ve played before and delivers a story that’s engaging because of the narrative that actually assumes some intelligence of its players.

Perhaps waiting for a Steam Sale would be a good idea for those interested in the £/hour ratio, but I say get it whilst it’s hot. Gone Home is a game that took me two hours to complete but will stay in my mind and keep me talking for years to come.