Back in my youth when I first started experiencing PC gaming on a dreadful family Windows ME machine, I sadly did not have the foresight to check PC magazines or sail the 56k seas of dial-up for video-game reviews. As a result, my library was utter pot-luck. It consisted of gems I’d stumbled upon by accident in my local dingy computer shop, as well as piles of tripe I’d had the misfortune to purchase, that no doubt were discarded long ago and are now lingering at the bottom of a landfill.

Thankfully, there were some brilliant titles in my collection. Morrowind probably gave me my fondest memories, but if I’m honest, the only reason I bought it was the pretty box art. I mean, c’mon, it looked super-cool, like an ancient tome, and it had a map and everything. A map!

One main downside of my recklessly uninformed approach to game purchasing was that I missed out on some true classics. Half-Life? I played the hell out of Counter-Strike: Condition Zero, but had little knowledge of the genre-defining shooter that spawned the mod in the first place. Deus Ex? Never even heard of it.

The Dungeon Keeper series is another example of a name that will bring misty-eyed nostalgia to any classic PC gamer more well-informed than I. With the unique concept of crafting your own dungeon and getting to play as the bad guys whilst you defended it from do-gooders, it was a blast. So I hear, at least.

Yet with the release of Impire by developers Cyanide, I finally had a chance to experience a spiritual successor to the series. Unfortunately, Impire smacks all too hard of one of those grossly misinformed purchases of long ago…

Rise of an Impire

One thing I can say in its favour is that Impire never takes itself too seriously. You step into the hellish boots of Baal, summoned into the mortal realm by the evil sorcerer Oscar Van Fairweather. Your new master bears more than a passing resemblance to Professor Doofenshmirtz of Phineas and Ferb, however, both in mannerisms and general incompetence. 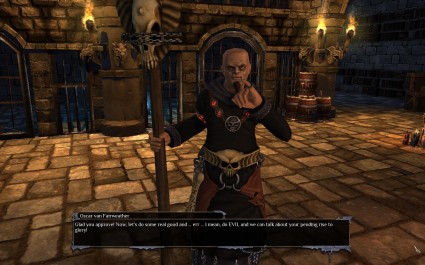 Oscar intends to use your power to inflict evil upon the world, for no other reason than how much he enjoys being a dick. The story is told in a series of cut-scenes, filled with banter between Baal and Oscar, as well as other zany characters that make an appearance throughout. Their dialogue is full of attempted humour, but much of it falls flat. The unnecessary length and static nature of the cut-scenes (most of the time they consist of characters just standing around in a dungeon) means you’ll likely be reaching for the ‘Skip’ button soon enough.

Sins of a so-so Impire
Well, this wouldn’t be a Dungeon Keeper-a-like without some dungeons, and Impire is happy to deliver on this front. Every level involves you building a new underground lair out of dark passages and dungeon rooms, with the help of worker minions. Some of these rooms build units; others give upgrades or create resources.

Once you’ve built up a modest base you’re ready to explore the subterranean world, fighting powerful otherworldly beings and completing mission objectives. You’ll also have to fend off invading heroes at regular intervals, as they attempt to scupper your evil deeds. On paper this sounds promising; probably because it’s similar in concept to Dungeon Keeper. Sadly, however, the game is fundamentally flawed in almost all aspects of its design.

Constructing your dungeon out of the pre-fabricated rooms and awkward passage tool is little more than a formality, not the creative experience it should be. Frustratingly, traps are entirely pointless, as heroes can invade your dungeon through ladders that randomly spawn anywhere in your dungeon.

Combat takes a similar route to Dawn of War II, with Baal acting as your hero unit central to several unit squads. You can choose to select all of your units and order them as a whole like a traditional RTS, but this is chaotic and loses important bonuses such as being able to teleport each squad. Yet whilst the squad system is a good solution to unit management, the unfathomable decision has been made to make you pay increasingly hefty sums of treasure to be given the right to control more squads. 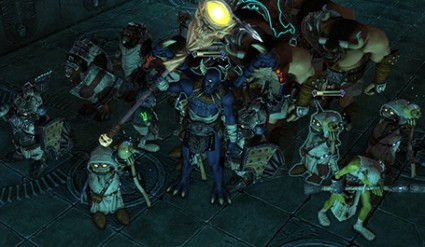 What’s perhaps most infuriating is the micromanagement involved… oh dear Lord, the micromanagement. Not good, strategic micromanagement that would be expected in order to master the typical RTS; this is appallingly conceived housekeeping. Every single unit needs to be selected individually every time they’re eligible for a new weapon or armour upgrade. Not just that, but units have a hunger that needs sating regularly by sending them individually to a kitchen room, else they lose attack power.

Cue a repetitive, mind-numbing sequence that sucks any potential fun out of the game. Send out squads to explore, individually upgrading their attributes as they level up. Teleport them back to the dungeon to destroy newly spawned ladders. Teleport them to the dungeon entrance to kill invading heroes. Send each squad one-by-one into the kitchen. Manually build new units and replace any lost in battle. Finally, teleport them back out to briefly explore before the whole cycle must begin again. You can’t even teleport all of your squads together; instead you have to individually beam each one in, with a couple of seconds of delay between each one.

I’m not finished yet, unfortunately; the list of bad design decisions is breathtakingly large. Mission objectives are utter droll, consisting of time-consuming tasks like flipping eight different switches scattered around the level. To access a lot of the goodies, like powerful units and upgrades, you unlock points for a tech tree by essentially completing ‘achievements’. These involve tasks like laying so many traps or building so many units; trivial objectives that need repeating in every level, and arguably should have no bearing on the actual gameplay.

Impire revels so much in treating you like a kid who must do their chores, it borders on insulting. I have to wonder if it’s some sort of ironic joke, in which you actually become an impish worker minion by playing the game, controlled by your evil overlord.

Impire Earth
For a lower-budget title, Impire doesn’t look too shabby at least. The art direction is predictable yet appealing enough, with a mixture of sewers, castle dungeons, caverns and other creepy settings to send your army of underlings through.

The cartoonish, slightly dated character models are reminiscent of something from World of Warcraft, but some effort has been made to create detailed environments. Your dungeon rooms, for instance, all have their own animations that help bring them to life. Worker minions in the kitchen grind meat into a disgusting pot and serve meals on conveyor belts, whilst those in the unit-spawning nursery stir cauldrons of green goo. Hover over these rooms and you’ll bring up a picture-in-picture preview window, which is actually quite a clever idea. 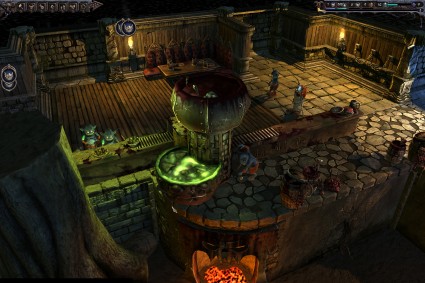 The only glaring issue with the visuals becomes apparent during cut-scenes. Characters don’t move their mouths to speak, instead simply acting through a repetitive animation cycle. Worse than this is Oscar’s face, which has been textured with a static, low-res expression that looks ridiculous and brings back memories of the first Max Payne; and not in a good way.

The Impire strikes back
Complementing the mostly acceptable graphics of Impire is a soundtrack that’s actually surprisingly engaging. There are a couple of epic fantasy themes included which are to a standard that’s unfortunately more exciting than the gameplay itself. Bravo, audio team.

The sound effects are perfectly satisfactory and there’s a considerable amount of spoken dialogue, with each lengthy cut-scene being fully voice-acted. Sure, it’s hardly award-winning standard, but it’s impressive nonetheless.

Age of Impires
Impire comes equipped with a Skirmish mode, letting you face off against up to three other evil dungeon builders in a choice of two different modes. King of the Hill is a game type you should be familiar with from other genres of games, and here it is implemented with a central objective to capture in a no man’s land between everyone’s dungeons. An alternative mode involves capturing dragons from this no man’s land and escorting them back to your dungeon. 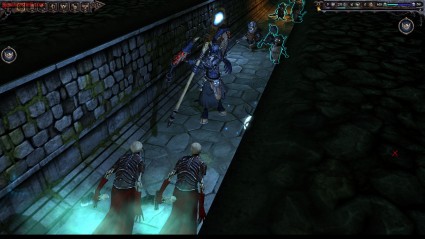 Skirmish is implemented well enough, but there are a few problems. Firstly, as is typical with more obscure games, hardly anyone plays so you’ll be struggling to find strangers to compete with. Secondly, this issue is compounded by the lack of an A.I .that can be opposed instead; the developers are rumoured to be working on adding this in, but your guess is as good as mine for an ETA. Finally, and most damningly, multiplayer is still hampered by all of the dreadful design faults present in the single-player campaign.

Impire: total bore?
Here’s the truth: I’m an unusually calm person that is very difficult to rile up. Yet I found that the more I played Impire, the angrier I became. I can’t conceive how a game with essentially solid constituent parts and concepts can be put together so badly into such an unenjoyable mess.

On the surface, Impire seems to have potential. Yet dig a little deeper, and it becomes apparent that its very foundations are irreparably flawed by bad game mechanics. The level of micromanagement required is unreasonable, and there’s a fundamental dearth of balance and logic in the tech tree, resource system and other key gameplay elements.

Impire may have serviceable visuals, art design, audio and ideas, but it fails where it matters most: being a game. I can forgive a title for having minor technical flaws or a lack of polish, but I cannot excuse a lack of fun.