It’s no secret that video-games usually do their best to absorb you in their fantasy world. While you’re slaying dragons, fighting wars and rescuing princesses, who cares about your upcoming maths exam, the important meeting at the office tomorrow, or that ‘rough patch’ you’re going through with the missus? It’s the perfect escapism.

Yet every now and then, a game comes along which actually encourages you to interact with the real world. These so-called ‘augmented reality’ games hadn’t really grabbed my attention in the past. That’s up until a few weeks ago, when I downloaded Ingress on my Nexus 4 and have subsequently played it almost every day since.

Ingress has been in alpha, then beta, for over a year now, and recently released in full. The developer is Niantic Labs, which is actually an in-house team at Google. The game hangs on a strange sci-fi premise involving the planet being overrun by beings called Shapers, and the appearance of a high-energy substance called Exotic Matter, or XM. A faction known as the Enlightened feel pretty optimistic about the situation, believing that the Shapers and their XM have arrived to bring about a new age for mankind. On the other hand, the Resistance are skeptics which feel threatened by this new arrival, choosing to do whatever they can to stop both the Shapers and the Enlightened.

Upon starting Ingress you choose which side of the fence you sit on (wanting to give our new alien friends a chance I opted for the Enlightened), and join the battle to capture ‘portals’ in order to control territories and harness the power of XM. These portals are player-submitted, and generally consist of landmarks, statues and other points of interest. Through GPS and mobile internet, Ingress displays a map of your location along with any nearby portals. By placing up to eight ‘resonators’ on a portal, you can capture and defend it for your faction. Using weapons called XMP bursters, you can attack enemy resonators until the point that they’re destroyed and leave the portal ripe for the taking.

What sets Ingress apart from most games is the need to actually get up, use those bipedal limbs jutting out from your pelvis and walk around. You only have a limited radius in which you can interact with the portals around you, so to make much progress you’re going to have to explore your town or city. In fact, playing Ingress in the city centre where I work has let me see it through new eyes. Not only have I wandered off the beaten track and found new places, but I’ve noticed landmarks I’d walked by before countless times, which I’d just never really paid attention to before.

Unfortunately, the locations near to you will play an important part in how much you can get out of Ingress. It goes without saying that the more densely-populated an area is, the more portals there will be. The village in which I live has a mere five portals dotted around, and the nearby town has around ten, but the city centre I commute to every weekday has closer to thirty or more. This makes it far more interesting to play, and I’m sad to say that if you live in the middle of nowhere, you may be disappointed. You can always try to create new portal locations in-app by taking a picture and submitting it, but inclusion may take some time and isn’t guaranteed.

Assuming that you live or at least spend time in a reasonably populated area, however, there’s a lot of fun to be had. The app is very slick and well-designed, styled with a futuristic neon aesthetic and simple touchscreen controls – tap a portal to interact with it, or long-press to access shortcuts such as to release an XMP burst weapon. 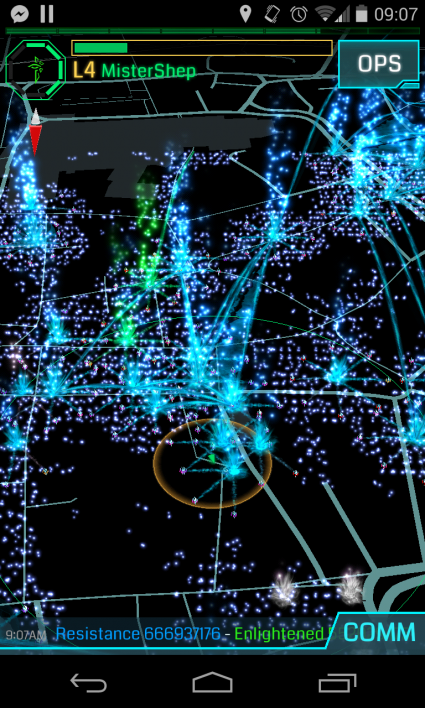 On this day, the pesky Smurf-blue Resistance had overrun most of the city.

For something that has its roots in basic capture the flag and geocaching, Ingress actually boasts a lot of depth, too. As well as attacking and capturing portals, you can hack them to retrieve items, recharge them to keep their defenses up and fortify them with turrets and shields to ward off attacks. By linking captured portals together, you can create control fields coloured in your faction’s green or blue theme.

Most actions, such as attacking, hacking and capturing all give Action Points (EXP) which feed into a progression system from level 1 to 8. Each successive level allows you to use more powerful weapons and items, and with the required amount of experience for a level-up multiplying each time, it’ll take a considerable amount of time to max out your character. There’s also a clever balancing system which ensures you can’t attack and capture non-stop; your reserves of the previously mentioned XM are exhausted as you perform these actions and need to be recharged by walking around and gathering more.

Ticking yet more boxes for a successful smartphone app, Ingress also has some decent social features built in. You can send out mass messages to nearby faction members, or private message specific users. Just the other day I received a private message from a stranger congratulating me on capturing some portals throughout the day, and giving me tips for better resonator deployment. It’s also an ideal game to play with play with mates – assuming they’re on the same side as you – as you’ll be able to take down enemy portals much quicker if you combine your attacks.

To start with, Ingress can be a little overwhelming, and I didn’t get the hang of everything straight away. If you take your time to play through the basic tutorials and read descriptions of items and perhaps the odd internet guide, however, it shouldn’t take too long to grasp. It may not appeal to everyone, however. When I’ve explained the game to people, some have thought it to be a neat concept, whereas others have proclaimed it to be a nerdy waste of time. Many of them would probably rather play Candy Crush on their smartphones instead, which makes their opinion null and void as far as I’m concerned.

Augment your reality!
There’s no doubt in my mind that the app should be awarded our esteemed ‘Buy It!’ endorsement. It’s innovative, well-made and shockingly addictive once you get absorbed into it. There’s only one problem with my previous statement, however. Ingress cannot be ‘bought’, because it is in fact completely free. I would gladly throw a few quid its way, but as of this time of writing it costs nothing and doesn’t even feature advertisements. Google, we love you.

Ingress is currently Android-only, although an iOS version is in the pipeline for some point this year. Niantic are also constantly updating the game, with a raised level cap and fully-fledged missions amongst the features to be added in the future.