Space Invaders. Asteroids. Galaxian. Space shooters are one of the oldest, most original styles of video-game; but as with any trends, what goes around comes around. Geometry Wars blasted onto the Xbox Live Arcade in 2005, effectively resurrecting this ancient genre and laying the groundwork for the modern multidirectional/twin-stick shooter. This concept has since been done to death by the likes of Everyday Shooter and Super Stardust HD (as well as a lot of less memorable examples).

To give these clones their due, some have at least tried to create their own spin on the genre, implementing original themes and gameplay nuances. Ion Assault HD is the next in line to jump on the twin-stick shooter bandwagon, boasting a new slant on gameplay that I’ll get to later. What remains to be seen is if this is enough to make its own mark, or whether it becomes yet another forgettable space shooter clone floating aimlessly in the cosmos.

The Ion King
Arcade at heart, Ion Assault cares little for anything in the way of a plot. The story goes that you’re a spaceship with a penchant for blowing stuff up. That’s what I could gather anyway, and is arguably as good a premise as any other.

Two game modes afford you the opportunity to blow stuff up in different ways depending on your mood. Campaign transports you through five varied worlds, facing a multitude of progressively explosion-heavy scenarios in each until you face off against a boss. As a change of pace, Survival places you in a more traditional scenario of fighting till death and trying to beat your high score.

Particle physics
The core gameplay of Ion Assault HD will come as no surprise to those familiar with the genre. The left thumbstick thrusts your spaceship around the play area to avoid the myriad of asteroids, laser beams, enemy spaceships and space debris all threatening to turn your craft into Swiss cheese. The right sticks aims in the direction you wish to shoot, but here’s where Ion Assault’s distinction comes into play. Rather than having infinite bullets or lasers at your disposal, you instead have to go around sucking up the abundance of ion particles littering the atmosphere and spitting them back out again as ammunition, like an intergalactic space Dyson. 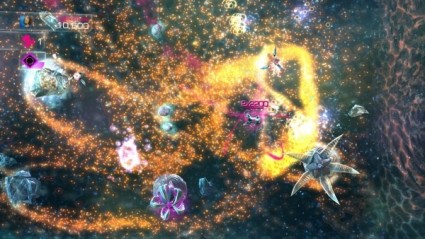 You can’t just back into a corner and fire away like with many of its contemporaries, as you’ll run out of particles to hoover up. The result is an energetic and balletic frenzy of ducking and diving through obstacles to absorb ions, blasting them back at your intended target, and collecting ions all over again. This keeps the action flowing, but it can become a chore after a while. The Survival mode automates the process of sucking up ions, meaning you don’t have to worry as much about ammunition. I can’t help wishing the same design decision had been made for Campaign.

Another factor that tends to frustrate is the difficulty level; this game is arguably best played by space shooter aficionados. Disappointingly, the main challenge actually stems from trying to make sense of the chaos on-screen. The playing field is so cluttered, you’ll suffer many an unfair death from an invisible killer, or being unable to see your ship altogether amidst the maelstrom of particles and obstacles.

Several power-ups are on hand to help out in a pinch, such as Gravity Boost (for extra suction), Seeking Drones (loyal vacuum minions) and vortex grenades (deployable exploding hoovers). You’ve also got several lives and unlimited continues to make use of; however, using a continue resets your running score for that world back to zero. Considering the main objective of each level is to blow up rocks, it’s actually this score system that’s the most compelling aspect of the game.

Obliterating asteroids and enemy spacecraft drops score orbs; collectables so similar in appearance to golden rings I had to wonder if my spaceship was piloted by a certain blue hedgehog. Blow up several targets at once with a blast of ions, and higher value orbs are spawned. Sweep up orbs at a consistent pace, and the resulting combo multiplier will get your score rising at an exponential rate. It’s an elegant system that adds a sense of urgency to proceedings, dissuading the player from leisurely floating around at their will. Your score is also more than just a meaningless number, as every 100,000 nets you an extra life. 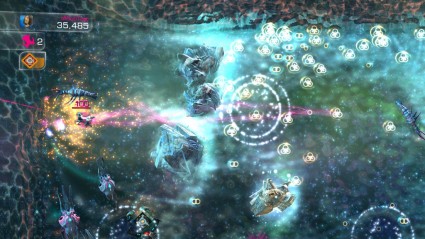 Best of luck to you in trying to make it through an entire world without using a continue and losing your score, though. The last world is particularly obscene in its difficulty, and the average player could potentially use several continues in a single level. I decided that life was too short to care; although, those with sixth senses and superhuman thumbs will appreciate the replay value of beating their high scores, in what is otherwise a reasonably short campaign.

Survival mode is a fun mode to get stuck into after completing the campaign. With not having to worry as much about ammunition, you can focus more on the frenetic action at hand, and trying to stay alive as long as possible. In fact, I found it more enjoyable in some ways than Campaign for this very reason.

High-Def or Hum-Drum?
Slightly uninspired and archaic-looking menus aside, the presentation of Ion Assault is relatively well-polished. It’s fascinating to watch the ebb and flow of particles around the playing field, and lighting effects are very well utilised. From the faint glimmer of each ion, to the attractive gleam on surfaces and the dazzling eruptions of every blast, Ion Assault is a spectacle to behold. It’s just a shame that this explosive extravaganza overwhelms your ability to actually see what’s happening. Visuals should always serve to facilitate gameplay, not detract from it. 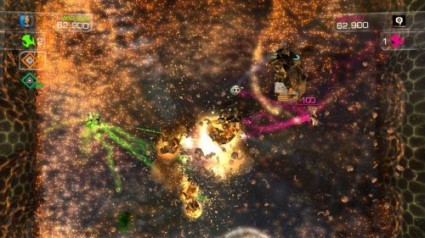 You can see what's going off here, right? Good, me neither.

Well, that mostly sums up Ion Assault’s audio at least. Nothing here is going to give your ears the least bit of surprise if you’ve ever played a space shooter before (i.e everyone but newborn babies and those brought up within Amish societies). My only real criticism is that the background music is languid and barely noticeable most of the time. Some upbeat tracks would have gone a long way towards gelling with the action-packed atmosphere.

Ruling with an ion fist
Space is a lonely place, so a multiplayer mode is offered for you to enjoy with friends. Friends and no one else, mind you; despite the online features, finding a match with a stranger is next to impossible. Space really is an empty place after all…

What’s most surprising is how different an experience it is to single-player. Dispensing with particle hoovering altogether, multiplayer adds more of a strategic slant. Each player owns a floating base that spawns kamikaze fleets of spacecraft on command, which hurl themselves into enemy bases like space lemmings. This may be fun for a couple of rounds, but don’t expect to be playing it for long. A more worthwhile use of your time is the co-operative Campaign; the game can be hard as nails at times, so the option to tackle it together with buddies is a welcome inclusion. 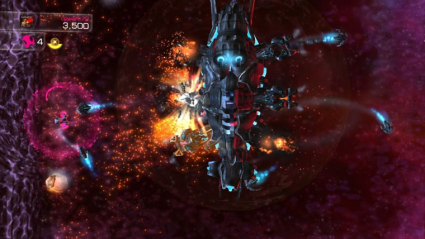 Lost in space?
I can’t say that Ion Assault doesn’t try. With its unique gameplay mechanic, it mixes up the twin-stick space shooter and successfully makes the genre its own. The main question mark is if it really makes it better, and not just ‘different’. I found that having to constantly ‘suck up’ ammunition becomes tedious after a while. Coupled with the considerable difficulty level and unfair screen obscuration, this makes Ion Assault a sometimes frustrating experience that’s best tackled in short bursts.

Without a doubt, some will feel at home here more than others. These players may welcome my grievances, seeing them more as challenges than annoyances. I’d recommend you take Ion Assault HD for a spin yourself and determine which side of the fence you sit on.