Tower Defence is one of the ‘in things’ at the moment. From Gears of War 3 to Assassin’s Creed, games are forcing in moments where you place traps to defend your favourite buildings from the angry hordes.  Double Fine has tried their hand at this with their latest game, Iron Brigade, or do I mean Trenched?

Thanks to a Portuguese board game maker, Trenched had to have its name changed and its European release delayed. Unfortunately for a co-op game, this has affected its gameplay. This is a damn shame, as it is perhaps one of my favourite games of 2011.

In the world of Iron Brigade, two men left disabled by the first World War hear an alien signal which affects their mind. While one creates stompy mechs to help soldiers walk again, the other creates television. However, this isn’t good television; it soon becomes an evil group of machines seeking to hunt down and kill humanity, otherwise known as the ‘Tubes or Monovisions. 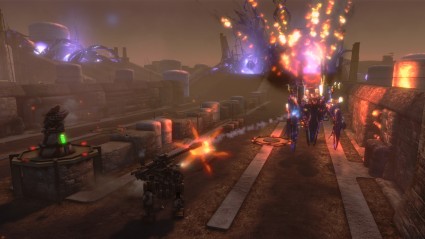 This game has a lot of explosions in it...

The story is all presented via the front covers of ‘30’s style ‘Man’s Own Adventure’ magazines, which suit the world perfectly. They also have some pretty funny in-jokes slid in via the front page titles, which are just another thing that marks out the game as a Double Fine production.

Trenches! Roll Out!
In Iron Brigade, you control your very own walker (or trench). You must defend your base against various waves of ‘Tubes, ranging from the default Resistors that attack your base up to the terrifying Volt Dropper bomber that can soak up punishment. The variety of enemies is great, especially as different types go after your base, your turrets or you.

In-between waves, you build up your defences by putting down emplacements wherever you wish. You have direct control over your mech and do battle with a large variety of weapons, ranging from standard machine guns up to huge artillery cannons firing magnets that suck in enemies. The basic shooting gameplay is fun, and I’m more than happy to just use my own guns and not rely on placing turrets.

Turrets, on the other hand, don’t feel quite right in my opinion. Partially, this is to do with their placement; as opposed to other games that limit you to certain preset locations to place your defences, their free placement makes it very easy to spread your turrets too thinly. However, the turrets themselves all have their perfect role and it never feels that any turret is useless. Turrets are built using scrap collected from destroyed Monovisions, which can be easily vacuumed up by simply walking near then and pressing in the left bumper to grab them all up.

Iron Brigade feels very Diablo-esque when you aren’t playing the missions. As you battle and complete missions you collect loot, ranging from new and exotic weapons and chassis to new paint jobs for your trench and items for your very own trench marine. In addition, challenges track your progress through various stats, which in turn unlocks more and more stuff. This constant progression works as good, if not better, than the system which Call of Duty 4 first pioneered.

On top of that, the game keeps track of your regiment stats. These are the stats collected from various other players, either from games you have joined or from your friends list. These unlock even more kit, some of which is only unlockable via the regiment system. All of these unlocks combine to keep bringing you back for more and more.

The different chassis, weapons and parts all mean the walkers can be customised to the players own specification; if you would rather just roll around placing emplacements, you can do. It works better in co-op, as in single-player it makes more sense for players to follow the handy hints given out at the start of each mission before you deploy.

War is grim… but not for Double Fine
The graphics in Iron Brigade are stylish to say the least. They don’t stand out technically, but they do give the game a great look. The designs for the good guys look great, really fitting in with being World War I era gear taken to its extreme. The Monovisions have their own distinctive looks which really helps to identify them at a glance, while also just making them look cool. It is very obvious that the development team at Double Fine had great fun in designing everything in the game. 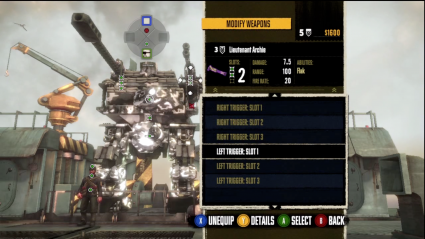 The sounds of the Trenches
The primary standout for me in Iron Brigade’s sound is the voice acting. From your Commander’s great cigar-chomping lines to Vlad’s proud boasts about his new creatures, the game delights in being as over-the-top as possible. They both fit their roles perfectly.

The rest of the game sounds great. The music is full of bombast as if it was from a ‘30’s Man’s Own Adventure, or Sky Captain and the World of Tomorrow. In-game, the screams of the Monovisions will set your teeth on edge, while all the other effects such as gunfire sound pretty good. Overall, the sound in general is nothing to write home about, but it is still very solid.

Bring a friend into your Trench
It is very obvious that from the beginning that Iron Brigade was designed for four-person co-op play. The levels all become a little more straightforward when you have at least one other player helping you out; as well as taking off the some of the strain, it also allows one player to focus more on heavy weapons rather than having to build emplacements. The levels do scale, so you will have to deal with more enemies than a player by himself. Additionally, you lose the infinite lives feature of the single-player and must instead get a team-mate to pick you up. Co-op is definitely the way to play Iron Brigade.

Have Double Fine done it again?
I love Iron Brigade; it’s a fun game, great with friends and full of the loot lust that keeps bringing you back for more. It is such a shame that unfortunately the game lost out on its big bang introduction due to some copyright issues. Grab a group of friends, buy Iron Brigade and shoot some of those damn Monovisions, marine!