Kero Blaster continues the current trend for retro style shooters upping the difficulty whilst taking the graphics back to a blocky 8-bit style. Unfortunately whilst there is fun to be found, fiddly controls and a hefty price tag lower its value.

Kero Blaster is a frantic platform shooter in the grand Japanese style; created by Studio Pixel who were also responsible for the classic Cave Story indie title. The aim of the game is to traverse the eight levels killing the various creatures within. This isn’t all of it there is, a vague storyline involving your company ‘The Cat and Frog’ agency and your job (as frog) in Custodial sciences. 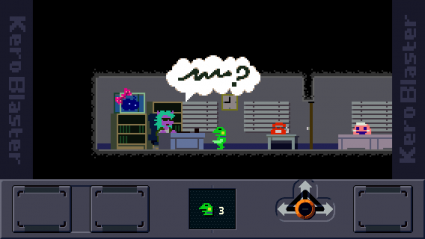 Talking to the boss

Kero Blaster is presented in an 8-bit and blocky 2D style and looks quite a lot like some of the classic PC shooters like the original Duke Nukem or Commander Keen. The graphics are clear and hold a lot of charm; even in this faux low resolution the residents are well animated and colourful. There is a good variation of scenery and opponents. Boss fights are particularly impressive; they rarely take up less than 2/3 of the screen and are inventive and challenging. The music follows the retro theme and is a tolerable mix of chip tune tracks. The sound effects are meaty with some nice weapon effects and a few humorous noises thrown in during death scenes or some of the between level cut-scenes.

As you progress, killing a creature will generally give you a pick-up; a coin that can be used in the mid-level shop in the fairly robust power-up system. You can also get health, extra lives and the bosses sometimes drop a new weapon. 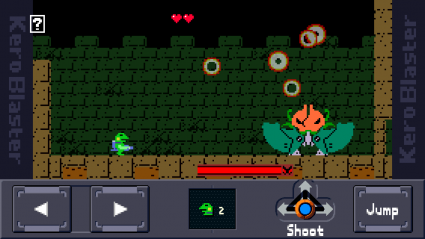 The weapons are fairly standard shooter fare ranging from a pistol styled pea shooter to a flame thrower, and includes an R-Type style fan shooter. All of these weapons can be upgraded to improve their damage and each level changes the visual style when it’s fired. The pea shooter can be upgraded all the way up to a laser weapon and the fan shooter gets an increase to the number of bullets and the angle it covers. Weapons can be changed at any time and some are only good for certain levels. For instance the flame thrower is great on the ice level but near useless in water.

Unfortunately once we get to the controls, things start to come apart a little. Virtual buttons rarely work especially well but the control scheme used by Kero Blaster especially emphasises all the bad points. The interface is made up of a left button, a right button, a jump button and a three way switch control to choose between left, up and right shooting. During the early levels this is all manageable but when you have to jump between tiny platforms using double jump with directions, it gets very frustrating very quickly. Active substance of the Levitra (Vardenafil) is a phosphodiesterase type 5 inhibitor (PDE5). This class of substances has a proven efficacy and a favorable safety profile. Having appeared on the market after a long period of “sole” existence of Sildenafil (PDE5 inhibitor), Vardenafil became just as popular. According to clinical studies, patients who underwent treatment with Vardenafil had a small but statistically significant advantage over those who took Sildenafil at http://buylevitra.net/levitra-prescribed-online/.

Which leads me on to another bad point: Kero Blaster utilises one of my all-time hated mechanisms, a technique that just screams lazy design; insta-death.

The annoying jumps mentioned before is sometimes done above falls that you can’t survive; this means that sometimes you have almost no control about losing a life. There are other occurrences too; some bosses will kill you when they touch you. This isn’t always the case and you won’t know until it actually happens. 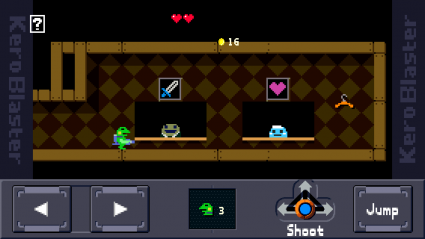 Cat got your tongue?

Kero Blaster has some quirky issues and some questionable design but these could all have been forgiven in a budget app store game. Unfortunately, it’s being sold at a near premium (on mobile) price of £2.99 that’s pretty much EA triple-A prices. At that price it just doesn’t have the polish or longevity it needs and I can’t recommend it, but if it ever gets a price drop to a more reasonable 79p then it’ll be worth at least taking a look.

The PC version is retailing at around £5 at the moment and whilst it’s more expensive it also doesn’t suffer from the same control issues of the iOS version, plus there’s a free game called Pink Hour – a prequel to Kero Blaster – and should give you a good idea if you’ll enjoy the full-price game.