Bizarrely enough, I quite enjoyed the original King Arthur Roleplaying game. When it came out in in 2009, it felt like a different take on the Total War formula, with the addition of magic and elements of a text adventure. Admittedly, it certainly had its issues, and it was nowhere near as polished as Creative Assembly’s offering.

Nevertheless, I was more than slightly intrigued by the announcement of a sequel. Unfortunately, King Arthur II has quite a few problems that almost cripple it…

Let me tell you a tale…

King Arthur II takes place after the events of the first game. Arthur himself lies wounded in Camelot and around him his kingdom is starting to fall apart, not helped by the fact Merlin has vanished. It is up to you, Arthur’s son, to go out into the world and find a cure for your father’s aliment and also reunite your broken nation. However, pitched against you are a huge number of foes ranging from the common banditry up to traitorous Knights of the Round Table, and even foes not of this world. 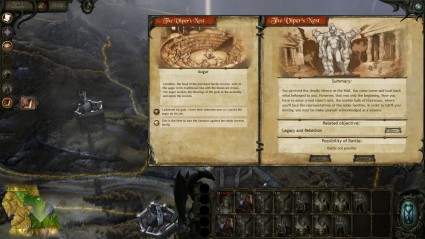 No holding the pages open while you choose!

I actually really enjoyed the writing in King Arthur II; it makes you really feel like you are part of an Arthurian legend as you move from town to town and quest to quest. Later on you meet many of the major characters from Arthurian legend, and each feels like a properly rounded character rather than just the entry point to a new set of quests. The ending of the campaign is a little rubbish, but the choices you can make during the game can affect the ending and so there is a reason to go back and play some more.

Using magic is playing the game
Like its predecessor, King Arthur II is split into two parts. The first is the overworld map, which presents you post-Roman Britannia steadily falling apart. In the original game, this map was as deep as it could possibly be, with units needing to be bought from specific places and some in-depth tax management and diplomacy. In the sequel a lot of this has been cut down, and so the map feel a lot more like some pretty wrapping over a mission select screen. It feels odd that they took this step back, and to be honest it really turned me off part of the game.

The game loves giving you choices. As you go through your quests, all begin as a text-based adventure, giving you a problem and two or more choices to go through. These allow many quests to be completed without even fighting a battle, as long as you use the correct choices. These choices affect your hero giving him buffs or penalties, and they also alter his alignment. This alignment is a complete axis, factoring in both good or evil and magic or Christianity. This affects the units you can build; good Christians can go to war with hordes of pilgrims or Templar-esque nights, while evil pagans can roam around with the fey helping them butcher their enemies. However eccentric these units are, at the end of the day most of the lower-level ones are simply standard units with slightly better stats.

On the other hand, you have the real-time battles which play very similar to a certain other franchise. These are a much better than the first game but at the same time, they’re still not quite as good as they should be. The first problem comes with morale. Such a simple thing that is so well presented in other games and easy to gauge is so inconsequential here. It’s hard to know who is going to win a fight, as there is no bar or meter to tell how the fight is going. Its also a little vague when you go into a battle. It gives you a quick flyby to show the map, but it doesn’t shout out just quite where the enemy are, or what they are, until the battle has started. 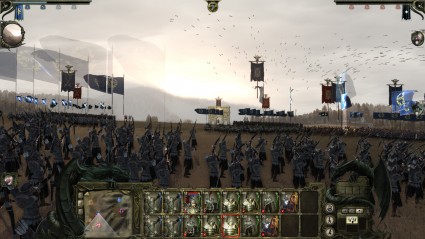 Man, it looks like there is a 'total war' going on here

On the other hand, magic and the aforementioned magic items can make the battles really fun to play as you bring the full might of the elements down on your opponents. Victory locations on the map give you a few more things to play with such as new spells or effects, which make the battles more than just two armies clashing. The A.I. (a vital factor in a game like this) is also pretty wicked; they have been known to get the jump on you a few times yet it’s not such a constant event that it becomes unfair.

A really cool feature is the ability to outfit your heroes with some cool and outlandish artefacts, as suits a time of myth and legend. These actually show up in battle and can make your heroes easily able to hold a flank by themselves, which can be great to watch. Overall, the gameplay can be fun but it has some major flaws which can get in the way.

How best to show you my Lord?
If there is one thing that Neocore has done well, it’s that they’ve made a technically good-looking game. King Arthur II looks excellent, especially when knocked up to DirectX11. The art style of units and appearance is distinctive with environment looking very dramatic; dark castles cast shadow across the land when you fight underneath, while magic lights up the environment. In fact, shadows are something they have done very well, making the world look menacing and grim.

Of greater concern is the performance level. Even on my machine which runs most things with ease, King Arthur II really struggled along, even at the map view. It was still playable, but the game appears to be horribly optimised. A little bit of a settings tweak is needed to get it running perfectly, but when it does work it looks rather good. It doesn’t match up to some other games but it’s not horrible to look at.

Listen to me as I spin you a tale
King Arthur II sounds great; in fact the sound is probably one of the main plus points. The backing music sounds epic, lending itself easily to stomping around the countryside being heroic. The narrator is good, with the right sort of tone for this style of story. I did have one or two issues with where the game cut off the narrator suddenly or I lost sound altogether, but when it worked I quite enjoyed the music, and it helped to conjure up a land of mystery and magic. 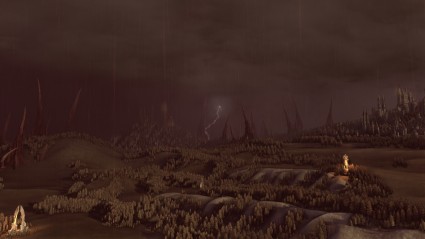 Look at that land... it's brooding at you!

A clash of Good and Evil?
I really want to enjoy King Arthur II. It has a great deal of promise and when it’s good it shines through. However, the rest of the time, the game feels like a legendary struggle against its deficiencies, such as the controls or its frequent crashes and bugs. If you are a fan of Arthurian legend or just want some more King Arthur, this game might be for you. For everyone else, maybe wait for a few more patches or until it inevitably hits the Steam sales.