I’ll be honest: I’d never heard of Nifflas’ Games’ Knytt series before, so when approaching Knytt Underground on Vita, I did so completely oblivious to what was ahead. All I could fathom was that it was a platformer focused on exploration.

What I discovered was a compelling oddity, and frankly, one of the most relaxing games I played last year…

A story told through atmosphere

To be fair, going into Knytt Underground completely oblivious is probably the best way to go and Nifflas’ certainly doesn’t hold it against you, with the game not only assuming that you know very little but also telling you very little. What it does communicate expertly, through atmosphere and setting, is that you’re venturing into a world that is very alien to you as the player. Though not to your starting protagonist, an underground dweller known as Mi.

Straight away, Knytt Underground rejects convention and then mocks it. As you begin, the first NPC tries to tell Mi that she’s an amnesiac. Mi quickly informs you that this is a lie; she knows exactly who she is. She is, however, a mute, and is looking to find her voice. This is the sort of awkward back and forth that you can expect throughout.

The story is then told across three chapters, and the first two are pretty short, likely leaving you even more dazed and confused than when you started. However, as you get to the enormous third and begin taking on quests, you’ll start to have a greater understanding of what the Underground is all about. It’s never straight forward or orthodox in anyway, but it’s always absorbing, subtly commenting on real-life themes, religion being the most obvious. 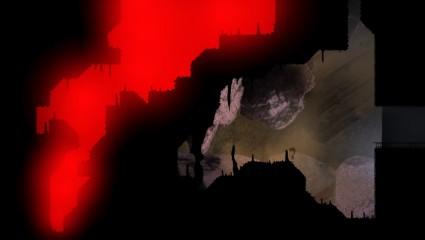 Exploration is the name of the game
At its core, Knytt Underground is a platformer about spelunking, but it falls into that category of games that have adopted the genre title ‘Metroidvania’. This means that there is one huge and persistent map that requires exploration, and you won’t be able to reach all areas until you’ve hit certain points in the game.

You’ll also need to take on tasks to open up paths, and these are usually simple fetch quests. An early example sees you heading off to find two candlesticks to present to the quest-giver before he’ll open a door for you. While the quests aren’t greatly involving, they’re an excuse to get you thinking about how to get into undiscovered areas.

In the beginning as Mi, you’ll only be able to run, jump and climb through the caverns. The mechanics for this are simple and in motion it handles quickly and nimbly, but not quite to the point of being finicky. Part way through, you’ll literally play as a self-aware bouncy ball, which changes the rules entirely, leaving you able to access completely different areas than before. When the game plays all its cards, you’ll be able to switch between the two powers on a whim.

There are a couple of additional one-shot power-ups that you’ll need to use and even chain together to reach areas and solve puzzles. One will shoot you upwards until you hit an obstacle or you jump out of it, another will send you horizontally across the map in the same manner, and the most flexible will allow you to head in any direction you want to steer for a short period of time.

With the game so focused on exploration, it is very forgiving. Falls won’t kill you, hazards (such as lava or electricity) and enemies seem few and far between, though they are one-hit kills. Still, death simply means a respawn at the side of the room you entered on and, similarly to Super Meat Boy, you’re free to try again as many times as you like without punishment.

With this setup, the game is immensely relaxing, yet uncovering each new area of the map quickly becomes an obsession. Suffice to say, it’s become my go-to game for those times when I just want to relax and be calm, but it always takes me on longer than I expected.

There are no real console-specific features on the Vita version (the version in which I’ve spent most my time), although there is the subtle ability to interact with the background foliage using the back touchpad. I discovered this by accident, and there’s no material reason to do it, but it exists. Feel free to stroke those leaves! 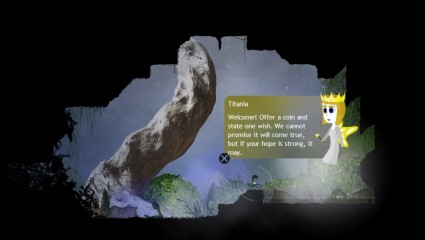 You’ll learn much about the world from the various quests…

Calming colours
Knytt Underground is simplistic in design, yet highly effective with its use of colour. For the most part, all the terrain and foreground items are in total silhouette, similar to Limbo, while the background is painted in a wonderfully vibrant and toxic colour set that helps create this mysterious, yet soothing atmosphere.

Gorgeous backdrops are abundant with rich foliage a regular theme, but you’ll also come across obviously man-made structures and devices that just mesh well with an overall accomplished visual design.

Tranquillity incarnate
Honestly, I think that Knytt Underground features one of my favourite video-game soundtracks from last year. It’s an obscenely serene arrangement that not only calms with soft pads, but also evokes a great sense of wonder as you explore the game’s many caves and chasms.

There couldn’t be a better accompaniment to the game’s direction, as it masterfully evolves as you progress through the rooms.

High as a Knytt?
Knytt Underground turned out to be a bit of a wildcard for me; a surprising game that I expected nothing of and ended up falling for its simplistic and absorbing charm. It’s playing in its humblest form, tapping into the type of experimental gaming you did as a kid.

“I wonder if I go through there?” and “Can I reach that ledge?”. These are the types of questions you’ll ponder constantly throughout, and it’s a joy to find out the answers.

While there are other indie games to be found on PSN that are more polished, exhibit more scope or ambition, or are even simply more coherent, few are this relaxing or well designed.