Now, more than ever, I find it’s important to take into account how much a game costs when commenting on how highly you’d recommend it. In MX vs. ATV: Supercross’ case, I’m pretty certain it’s important to note that this is a budget-price racer. Available for around £20, it’s only out on the PS3, 360 and soon the PC.

So, does this low price act as an admission of guilt or is it just good value for money? Well, it’s sort of a bit of both. MX vs. ATV: Supercross features thrilling races, challenging tracks and some decent visuals, yet is ultimately let down by its lack of content.MX vs. ATV: Supercross is built on fairly strong foundations. Racing, either on MX bikes or on the larger, 4-wheeled ATVs is the same. Tracks, which can only be described as ‘lumpy’, will launch you through the air and require you to land at the right angle else you end up face first in the dirt.

I’m no real fan of racing games if truth be told. I often find them a little monotonous, with tracks requiring nothing more than braking at the right time and overtaking manoeuvres being few and far between. MX vs. ATV: Supercross, though, manages to keep even my interest, with the fact that races are full of moments that require real precision and timing. 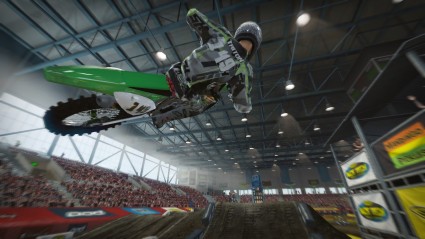 A tip. This is not a good landing angle.

The tracks are a real strength. There’s a good mix of giant ramps and small stretches of ‘bumps’. There’s also your standard fare of tight corners and chicanes, but really it’s all about throwing yourself through the air. Not only is it fun, it’s what will win you the race.

Launching into jumps is a matter of approaching at the right speed, angle and using your rider’s ability to ‘boost’ the jump by flicking down and up on the right analogue stick. Landing asks that you angle your bike so all wheels touchdown at the same time, ideally on a downard slope. There’s also a button to pop your clutch which gives you a small boost of speed should you have a bad landing.

It’s a shame, then, that there’s no tutorial to help explain its mechanics. A loading screen will prompt you that there’s a button for the clutch and that you can use the right analogue stick to angle your rider, but they don’t explain too much more than that, such as why or when to pop your clutch. I honestly ended up relying on the information I’d been told when I last played the game, under the helpful supervision of one of the developers.

Another element that’s not exactly spelled out is the ability to perform stunts. Aside from looking cool and acting as a method of annoying your opponents, they’re pretty useless. There’s no mode in the game that’s focused on tricks. In fact, there’s very few modes at all. 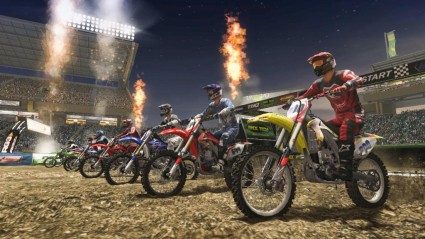 It’s not authentic until you’re covered in sponsor’s logos.

Which is really the biggest complaint. There’s a career mode, but this amounts to nothing more than a sequence of races whereupon you’re deemed the overall winner or not. These career races help you unlock extra parts for your bike and your rider, but these are largely cosmetic. I mean, the different parts have different stats to them, but their effect is negligible at best. Perhaps a greater appreciation for the different parts would come after 100 hours of tinkering, but in my time, I didn’t notice too big of an impact. You also unlock gear and clothes for your rider, which in theory you’d want to equip to show off to your online buddies.

I say ‘in theory’ because the time I had with the online mode was temperamental. Odd glitches would occur, meaning my opponents would stutter about the track. A giant caveat I must place though;

CAVEAT: My internet is download speed is approx 2.9Mbps. This is normally fine, as I’ve played many games of FIFA and done many meaningless quests in Final Fantasy XIV: A Realm Reborn. This speed, however, may not be ideal for MX vs. ATV: Supercross. It really should be okay though.

‘Okay’ is the bottom line of this entire game. It’s okay. If you take into account how enjoyable the racing is and how low the price is set, you could probably justify spending some cash. Be warned, if you’re after more than simple racing, you’re going to be disappointed.There’s no real reason to unlock all of the bikes and bike parts, as they don’t change much, if at all. There’s no real progression through the career mode, as they’re nothing more than a playlist to work your way through. So give it a go if you’re interested, but don’t expect too much. Expect the most bare-bones of racing experiences and you won’t be disappointed.