In the frozen wastes of the Arctic Circle, a flight of JSF’s fly over the icy wastes. They are heading towards a target sitting just off the coast of Norway. Getting in range, they deploy their air-to-surface weapons before heading for home. The missiles arc, hitting the target and sending it sky-high.

The report box on your screen reads: ‘fishing trawler destroyed’.

Welcome to Naval War: Artic Circle; a game about intelligence, simulation and blowing up innocent fishermen.

In the dark future, there is only resource war

Naval War is set in the near future, at a time when resources are running low and the situation is heating up. Russian and Scandinavian ships come to blows over fishing rights and demands for fuel, whilst diplomats sit round the table arguing over tolls and tariffs. Into this situation, NATO starts a naval exercise in the North Sea, a threat Russia doesn’t take lightly. As you expect, it soon turns into an all-out naval war with each country bringing its full might.

It’s an exceedingly plausible setting and none of the mission’s individual stories are far-fetched; it doesn’t quite reach Tom Clancy scale madness. In between the missions, there are some rather nicely drawn conversations, with each speaker’s portrait popping up. They have a sense of humour to them, quoting Bad Boys 2 among other things, something I really wasn’t expecting when I started playing. 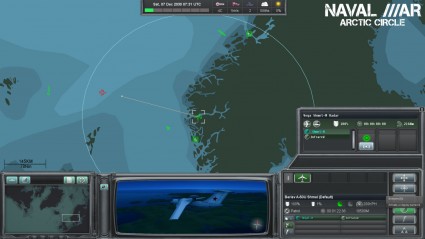 Get used to this view; it is all you'll be using

There are two single-player campaigns (one from each of the sides) which play through the same events but from the two viewpoints. These missions nicely ramp up, starting with a small selection of units in a small area and ending up with full scale, combined arms warfare across the entire North Sea area. There are also several symmetrical single missions designed for multiplayer play, but that can be played through by a single player. It would be nice if the game included a mission editor but by the sound of it, the developers are already making an editor they plan to release which may tie into the Steam Workshop.

Welcome to the Danger Zone
If you hadn’t realised by the publisher Paradox Interactive, Naval War is a realistic simulation. In this case, it’s of combined air/surface warfare, granting you access to units ranging from motor torpedo boats up to aircraft carriers, and from tiny UAVs up to huge four-engine bombers. From these various realistic weapons of war you need to deploy them at the right time, balancing fuel and ammo concerns and choosing just when to deploy all the sensors at your disposal. It sounds terrifying, but it’s actually really slick and intuitive to get into.

In all the missions, you are granted a selection of units. You don’t have to bother with the production or resources gathering, so it’s only down to you to direct your units to where they need to go. Time is soon a resource you need to deal with, especially as switching loadouts on airborne units can take up to an hour in the game (although you can speed up gameplay to get past long waits). You can also adjust nearly everything about how a unit behaves, from how it deals with spotted enemies to how fast and at what altitude it flies.

I mentioned in the introduction about bombing fishing boats, and it illustrates that your greatest weapon in Naval War is information. When you find units via radar or sonar, they appear as unidentified contacts until you get closer or eyes onto it. Most missions include objectives to not shoot down civilian targets, and so it is vital to properly identify before launching your defences. It’s especially tense when you know that somewhere out there is a submarine and your legion of sonar buoys just aren’t doing the job.

Now the slow pace of the game does bring a slight problem. Missions can last several hours and a mistake at any point can ruin your game. Another problem is a few bugs, such as only being able to launch Tomahawk missiles in one great go rather than individual, and the game’s design causing your firewall to block communication between the menu and the actual game.

Best stay in the War Room..
If you’re coming to this game for an amazing visual experience, you’ll find it lacking. Most of the game is played in a 2D outline view, a bit like Defcon with coloured outlines floating across the map. You can toggle up a 3d camera that primarily tracks the selected unit but it doesn’t look fantastic. The unit models are great, with a lot of work having gone into the texturing, but the world is plain with no 3D graphics for towns or forests. It can make it difficult simply working out where you are in 3D mode, making it more of a vanity feature.

However, I found the UI to be really nice and clear, making it exceptionally easy to use. I actually found it really intuitive, able to orchestrate operations within a few minutes of starting to play. 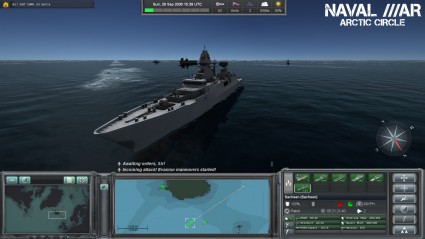 Off hunting for fishing boats again...

No shouting, explosions or loud music
Naval War is a little quiet though. It’s all about muted warfare, with a little ambient background music and the occasional sound effect. They do the job of making you feel like you’re in a war room, moving pieces around a map. I recommend you put your own music on while playing.

The Naval Captains went in two by two…
Naval War supports multiplayer and it has the potential to be great fun. However, there are two problems. The first is that the community is very quiet; there are the occasional games but most of them are private or only show up once filled. The other thing is just the sheer length of the missions, which make them a little awkward to play with another person. Another thing is that the missions are all one on one; one player plays NATO, and the other the Russians.

Objective achieved: review written
Overall, Naval War Arctic Circle is a great simulation game. It will appeal to people with memories of the early ‘90’s game Harpoon, as well as anyone who’s looking for a game they can sit and play while catching up with a TV series in the background. Its well worth the price, so pick it up and fight over some fish.