I remember when Oddworld: Abe’s Oddysee first launched to critical acclaim back in 1997, it was simply unlike anything else I’d ever played or even seen before. Its graphical style was fresh, its themes were somehow both cutesy and incredibly dark, and its puzzle-heavy direction resulted in a far more cerebral platforming experience than my young brain was used to. It was undoubtedly a classic; a game that many – including myself – would happily label as ‘ahead of its time’.

Well, the current development custodians of the Oddworld universe, Just Add Water, apparently wanted to test that theory, rebuilding Abe’s inaugural adventure from the ground up with new graphics, new audio and a new name to boot.

The result is Oddworld: New ‘n’ Tasty! A remake that not only proves without a shred of doubt that the original formula still holds up pretty damn well, but modernises it just enough to welcome those who never before had the pleasure.

Abe, if you’re new to the series, is one of many Mudokon slaves put to work in the Oddworld’s most sinister abattoir, Rupture Farms. The company is renowned for both producing the tastiest meat treats on the market and for causing extinction to an entire species in the process. While giving the floor a good polish one night, Abe accidentally wanders into a company board meeting and discovers that, in a bid to upturn dwindling profits, they plan to start using the Mudokons as the main ingredient in their latest product.

As the understandably horrified Abe, your initial aim is to escape Rupture Farms while saving as many of your companions in the process. The story does progress beyond this dark premise and quite quickly, so I won’t delve too far as the plot takes a few entertaining twists and turns along the way.

The platformer has been, chapter by chapter, lovingly recreated in 2.5D and the result is simply superb. Oddworld Inhabitants’ original character and world designs feel right at home in the high-definition generation, brought to life magnificently thanks not only to its extra dimension, but also the detailed models, crisp textures, plus brilliant new lighting effects. The backdrops in particular really impressed me here, always full of movement, colour and character.

As far as gameplay goes, aside from some minor control adjustments to make for a more pleasant experience, this is pretty much like the Oddworld fans would remember. Each area you walk into represents a puzzle: How will I get past the enemies? How do I pull the lever without being spotted? Can I use the trapdoor or lift to my advantage? Can I do this in a way that leaves my buddies alive to save them afterwards?

Solving each new problem each is extremely satisfying. 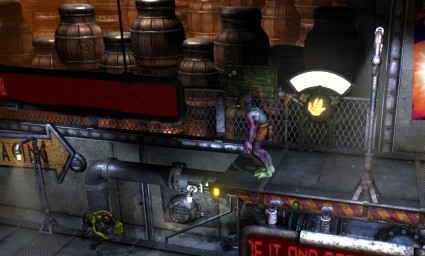 I attribute a lot of this satisfaction to the fiendish difficulty and ‘trial and error’ approach that New ‘n’ Tasty takes, always requiring precise movement and impeccable timing with anything else resulting in death. The unforgiving difficulty of the original is offset in this updated version by the inclusion of a quick-save. With this, you can save your place at any time, and while death will always take you back to the last ‘proper’ checkpoint at first, you can reload your quick-save afterwards and get back to where you were. I’m not afraid to admit that I spammed this a lot in later areas, especially when some of the hazards got really hectic.

Abe’s skillset also makes the puzzles so much fun to solve. He is, at heart, a coward with no real offensive attacks of his own and his low threshold for damage means you’ll have to stay out of danger and rely on your noggin to survive. This leads to plenty of sneaking around, hiding in smoke or shadows, using the environment to your advantage or an enemy’s own weapons against them. There are also plenty of moments where your only port of call is to run to safety (and not fall down a hole or get gunned down in the process).

Abe’s most remarkable skill, however, is the ability to possess Sligs – the gun toting creatures with mechanical legs. Once in control, you can move them freely around the screen, have them disable traps by turning them off or just walking into them, or gun down their colleagues before they know what’s happened. Of course, this isn’t always a viable option as some areas have devices floating around that will shock Abe when the power is detected, and getting around these is just another puzzle for you to solve.

With each new ability, each new area, New ‘n’ Tasty! finds satisfying ways to keep you on your toes, whether that’s periodically throwing different types of enemy at you, putting you on the back of an Elum for a spot of high-speed precision platforming, or just communicating with other characters through Abe’s ‘Game Speak’. The latter is used at times to mimic others or provide passwords, but its primary use is for rescuing enslaved Mudokons. Using simple commands, you can gather Abe’s troops before leading them to safety, and even after all these years, such interactions are always charming. 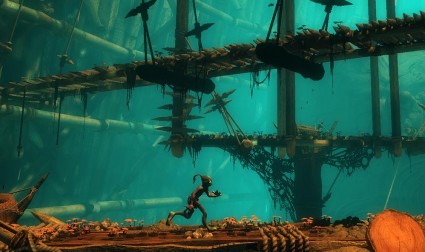 The original Abe’s Oddysee featured 99 Mudokons to rescue, but New ‘n’ Tasty! has increased the number to 299, and saving them all is tough as they’re so easily killed. Call one at the wrong time and they might well walk straight into a meat-grinder or get shot by a stray bullet, and you’ll forever lose them unless you restart the checkpoint.

Still, saving them is technically optional; there aren’t many that are essential, but the amount you do save has a bearing on the ending you receive, so keep that in mind. Plus, bypassing them entirely is really to miss out on half the fun.

Welcome back Abe, we missed you!

Oddworld: New ‘n’ Tasty! is a fantastic remake of one of the most memorable puzzle platformers ever made. Just Add Water have kept Abe’s Oddysee’s original principles at the core and rebuilt the entire game around them, modernising only where necessary and in a way that never compromises or dumb downs the experience.

The most amazing thing, however, is that Oddworld’s formula, its grotesque characters and unique design still feel fresh seventeen years later. Whether you’re coming into New ‘n’ Tasty! as a newcomer or with nostalgic eyes seeking for a new take on an old favourite, you’re in for a real treat.