Oddworld: Stranger’s Wrath is one of those games that everyone tells you that you just have to experience, but you never seem to find the time. I thought I’d get my chance when Just Add Water’s HD remake hit the PS3 in 2011, but being in the middle of a migration to Australia and my PS3 spending most of the last year travelling to more countries than I’ll ever visit (along with the rest of my belongings), I had to sit tight and wait for the Vita version.

That Vita port was released just before Xmas; was it the present I’d been hoping for?

The Ugly, The Ugly and The Ugly…
Although set in the same Oddworld universe as Abe and the gang, Stranger’s Wrath is a Western-themed shooter, and is both a third-person action game and first-person shooter in equal parts.

You play as a mysterious bounty hunter known only as ‘The Stranger’, and you pick up his story as he sets about taking on all the bounties that he can get, so that he can afford to pay for a live-saving operation. There are a few important twists and turns that I won’t go into, but the crux is that the Stranger is desperate for moolah (actually called that!), and he will take down anyone to get it.

While the story isn’t particularly deep for large portions of the game, it’s always engaging, thanks mostly to the dark charm and rich nature of the Mudos Frontier. For the first time, too, it’s an amazing thing to see all these Western tropes layered with the surrealism of the Oddworld lore. 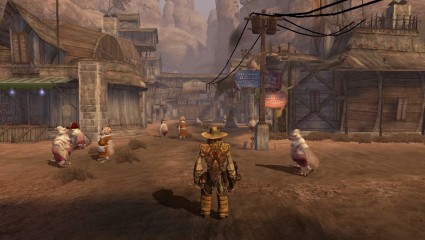 A matter of perspectives
For most of the game’s structure, you’ll find yourself heading to towns, taking on their bounties and traversing your way to the enemy’s lair and capturing them, dead or alive. The latter part of the game changes this structure around, but for the most part, the bounties are your primary focus.

Stranger’s Wrath features a mechanic that still seems to be quite original, even to this day; you can switch between third and first-person perspectives at a whim. On the Vita version here, this is done by a quick double-tap anywhere on the front screen.

For the most part, you’ll only really use the third-person mechanics when traversing quickly between towns or heading to your bounty, also partaking in some light platforming elements to get around the obstacles thrown in your way. You can mêlée while in this view, which is a great way to send enemies flying when they’re a little too close for comfort.

In first-person, you’ll be playing the game as a shooter, and this is really where it comes into its own.

The Stranger only has one weapon throughout and that’s his trusty crossbow. Variety, instead, comes in the form of his ammo, the twist being that his bullets are live animals and each cutesy (and not so cutesy) species has its own uses.

The spider-like Bolamine, for example, can be used to temporarily restrain your foes with its web, while the Chippunk can be used to lure enemies away from their groups by being extremely annoying, allowing you to thin the numbers looking to murder you. The closest thing to traditional bullets are the Stingbees that, when fired, will hone in on your enemies as they run around. There are nine different types of creature to find and play around with, and with it being live ammo, you’ll need to hunt for more on the fly if you want to save your moolah.

With a slight stealth system in effect thanks to the fact that you can hide in the long grass, there are a lot of possibilities and ways to take down your enemies. You could use a Chippunk to lure an unsuspecting foe away from his group before hitting him with the Bolamine, or be a bit more gung-ho with Boombats. It’s entirely up to you how you tackle this. As a newcomer to the game, I can see some precursors to Bioshock layered into the gameplay possibilities presented here. 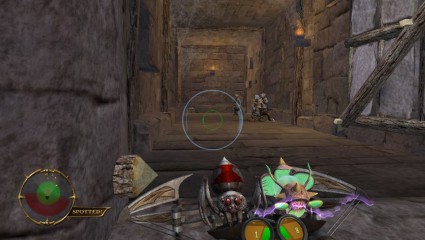 No matter which perspective you’re in, your initial aim is simply to capture the bounties, but you can capture any foe you like by stunning or killing them, and then trapping them by holding the Square button.

The bounties themselves make up the game’s boss fights and each one is a joy to battle. Each cleverly-named nemesis comes with distinct quirks and formulas required to take them down. Again, how you take them, dead or alive is up to you, but you need to adjust your strategy and ammo type to achieve your goal. Once your mission is complete and you head back to your current town, you trade all your captured foes for money at the bounty store.

With that, there is a light-upgrade system in place. By spending your moolah at the General Store, you can buy armour upgrades, increase the power of your mêlée attacks, upgrade your ammo types so that they’re more effective, or buy pheromones that bring out more of a particular ammo type in the wild. It’s pretty flexible.

Health is managed manually in Stranger’s Wrath. Rather than auto-healing or collecting health-packs, you can hold Triangle to have Stranger shake off his injuries. You’ll spend stamina doing this, so it’s not always a simple case of taking cover and hitting the heal button; you’ll have to really think about the way you’ll approach each encounter or face the wrong end of a beating.

Unfortunately, this port features some annoying technical design choices in terms of the Vita’s touch functionality, and it’s the first-person view that brings these to the forefront.

For example, tapping the backscreen in first-person has Stranger punch. As a gamer with big hands, you can imagine how often I would accidentally hit this. I was forever nicking the backscreen in the middle of combat, hampering my ability to shoot. As a result, at times I simply had to simply hold the Vita uncomfortably to progress. Similarly, but to a lesser degree, as holding on the frontscreen brings up the pause menu, it’s possible to unwittingly pause the game when turning or strafing if the slightest part of your thumb overlaps on that front screen.

I’ve seen JAW mention a potential patch to fix the former on their Twitter account, so it hopefully shouldn’t be a problem for much longer. Plus, it’s not all negative from a touch perspective; the double-tap to switch between views is nice and unobtrusive, while pinching the backpad to zoom in works perfectly. 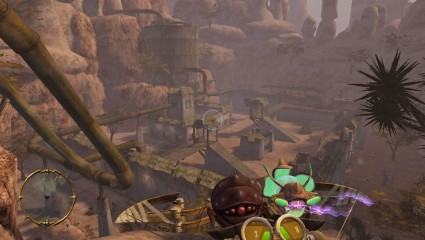 So, how are you going to take this base?

What you looking at, Stranger?!
In a massive compliment to JAW’s work on this port, Stranger’s Wrath never really looks like a seven-year old game, especially not on the handheld console, as bright colours and lovely scenic contrasts all pop in this really lovely way. There is the occasional noticeable hiccup, though, some slight pop-in or the sky flickering when the camera is held at a particular angle, but nothing that will put a dampener on your playtime.

The cut-scenes seem to be a little compressed, I assume to keep the game’s file size small for download, which results in a very slight blocky look. Then again, it could just be that they’re using the same cut-scenes unedited from the original release, but having not played that or the PS3 HD version, I’m unable to say whether that’s the case.

What the fuzzle?
Stranger’s Wrath features an atmospheric, Western-themed soundtrack that perfectly accompanies your journey around the sandy Mudos landscapes. In fact, every audible element, from that music to the voice-acting, perfectly plays on old cowboy movie stereotypes, but manages to make something that’s entirely its own using elements of Oddworld’s weirdness.

I mean, it’s the only game I’ve played where I’ve had my ammo talk to me, so that’s gotta count for something, right? 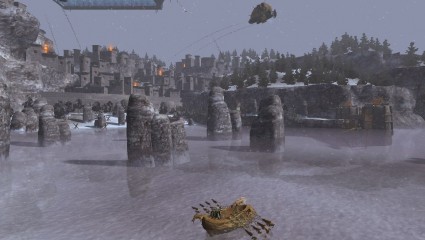 Things do change up. Here Stranger’s Wrath is channelling ‘Medal of Honor: Frontline’…

Does it incur wrath?
As a newcomer to the game, I’m pleased to say that Oddworld: Stranger’s Wrath is one of those titles that wholly deserves its positive reputation. Even now at roughly seven-years old, it manages to have more originality and charm than most modern-day shooters, plus it looks great and plays lovely too.

That said, this Vita version does have some odd control decisions that prevent it from being the perfect handheld port and, personally, JAW’s use of that back touch-pad is the one thing that I would change if I could. It would have been such an easily avoided issue too, if only the option to tinker with control schemes was there.

Still, despite the odd control misstep, the journey across Western Mudos is not only one that I’m glad to have finally taken, but one I wish I’d embarked on far sooner. If you’ve not had the pleasure already, then it’s a definite recommendation from me.