It was Colin McRae’s Dirt that first introduced me to off-road racing in video-games. Eschewing standard rally tracks at times for simply getting down and dirty in the mud, it was a solid racer that glorified 4×4’s and off-road buggies, with slick, slippy-slidy fun.

Yet you could say that Dirt was presenting off-road driving in a fantasy world. Sure, the mud made handling your vehicle a challenge sometimes; but there was no on-the-fly fiddling with differential gears or tire pressure, no rocking backwards and forwards in vain hope to break free of deep slurry, and no winching yourself out of otherwise hopelessly sticky situations.

What’s that? None of that realistic stuff sounds like any fun for a video-game? Oh. It would appear that 1C Company didn’t get the memo, because in an attempt to show how off-road driving should really be simulated, they’ve released, erm… Off-Road Drive

It’s about to get dirty 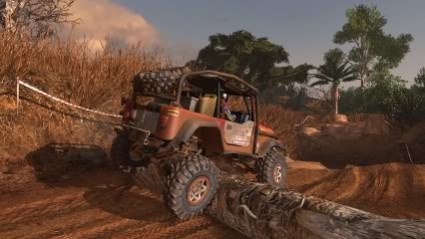 Oh, who left this tree here in the way? How inconsiderate!

An uphill struggle
The reason why 1C Company really deserve an ‘A’ for effort here is in their relentless pursuit of realism. No muddy rock has been left unturned in an attempt to simulate every aspect of the sport accurately and completely. To fight your way through the mud you’ve got a complex array of vehicle controls at your disposal, and believe me when I say that you’ll need them.

You’ll be using a compressor to alter the PSI of your tires, altering your differentials to redistribute power across your wheels, and switching between low and high gear ranges, all in the often vain effort to make it through the nightmarish challenges you face. When things get really hairy, you can even deploy a winch, dragging yourself out of the dirt with the help of nearby trees.

Yet it’s all very hit and miss as to how useful they are. Sometimes you’ll lazily disregard your assists and just power through an obstacle as fast as possible, and your vehicle will quickly emerge triumphant on the other side. Other times you’ll approach a situation thoughtfully, taking time to set all of the vehicle assists to their ideal settings, and your SUV will respond by getting hopelessly trapped in the first puddle it comes across. 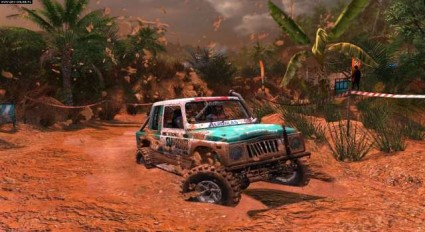 A sight you'll be seeing. All. Too. Often.

This inconsistency and seeming reliance on luck as much as judgement is a frequent annoyance that hampers the enjoyment of potentially interesting game mechanics. Another aspect where the attempted realism falls flat on its face is the physics engine. On ground it’s impressive on the whole, giving a solid feel of resistance and leaving physical tracks in the mud as your vehicle carves its way through. Launch into the air, however, and you’ll soar and flap about like the SUV is made of plastic.

It’s also excessively fiddly to play. Controlling your extensive suite of vehicle assists is performed with buttons that are arbitrarily assigned to random locations around your keyboard, so you’ll be finger-pecking like a grandma using a computer for the first time. This is an experience where convenience and accessibility have taken a backseat to simulation.

The manner in which races are conducted was another disappointment for me. Rather than piling into rivers alongside opponents and trading friendly bashes now and then, this is a road you’ll be travelling alone. Your position in a race is indicated by nothing more than a number in the top right-hand corner, and the occasional ghost that appears to show you an opponent’s route. It all feels a little lonely, and like a missed opportunity for some good dirty fun.

Clear as mud?
For a lower-budget game, Off-Road Drive doesn’t look too shabby. It’s hardly going to win any awards or make you shed a manly tear in awe of its beauty, but it’s certainly presentable. Vehicle models are thoroughly detailed in yet another bow to realism, and the sprays of dirt and channelled tire tracks are a nice touch. This is a game that’s very brown; but then again, so are many games these days. At least Off-Road Drive has a good reason for it. 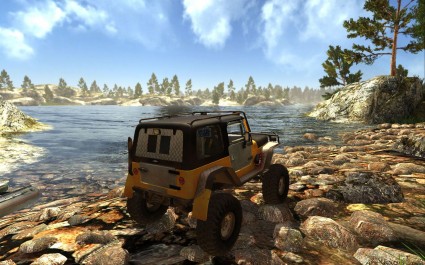 Yes, it can be quite pretty. Now get back to work; those tyres aren't going to get stuck themselves

Throttled
Imagine meaty 4×4’s struggling and straining through adverse terrain for hours on end, and you’ll have a good idea of what playing Off-Road Drive sounds like. The fact that you’ll be listening to plenty of vehicle revving is a given, and I guess all I can say about the matter is that it’s… throaty? There, that’s an adjective for you.

What is more surprising, however, is the soundtrack. What’s on offer here is a little heavy metal, accompanied by some heavy metal, and then finished off with a selection of heavy metal. I was actually taken aback by this inclusion, especially as some of the tracks feature… *gasp*… screaming vocals. As an avid metalhead I wasn’t phased one bit; although, I imagine that the masses who’d prefer their music to be made by a computer rather than a guitar won’t be particularly impressed.

Ghosts in single-player, ghosts in multi…
For the sake of completeness, Off-Road Drive features a multiplayer mode. Sadly, as with many obscure, niche releases, the servers are utterly deserted. It almost makes me wonder if the developers of such titles should even bother in the first place. Interestingly, multiplayer actually supports four players racing on a track at once, unlike the single-player campaign. Good luck finding three competitors, though.

A little too messy
Off-Road Drive is certainly a labour of love, being by far the most accurate off-roading simulation ever released, to my knowledge. Unfortunately, the deep satisfaction to be had when conquering tricky hazards is outweighed by the immense frustration you’ll feel at other times, and the frequency with which you’ll be hitting that ‘Restart’ button. Aficionados of the extreme sport will likely lap up what this tribute has to offer, but others may find the experience less palatable.