Last year’s OlliOlli was a surprise hit. I’d all but given up on the skateboarding genre, but with superb mechanics and a deceptively simple design, it had me hooked. Yet as well-executed as it was functionally, in other areas it was a little rough. Not least of these were the visuals, featuring an awkwardly pixellated protagonist with crippled animations, set against hopelessly bland and generic levels.

After their initial trial run, however, Roll7 have returned to land a more ambitious attempt. OlliOlli 2: Welcome to Olliwood may not reinvent the wheel, or the board, but instead successfully iterates on its predecessor in almost every respect.

The most obvious – and desperately needed – upgrade is in the graphics department. I mean this in the best way possible: OlliOlli 2 now looks like the cream of the crop from the iOS Appstore. It’s bright and colourful, with rich, imaginative movie-themed backdrops and buttery-smooth animations. It’s all very familiar, but it’s as if the original aesthetics have been passed through a beauty filter to make them vastly more attractive and modern-looking. Where the production values did previously excel was in the surprisingly varied and entrancing soundtrack – thankfully this style continues with plenty of trendy, upbeat or trance-like tunes. 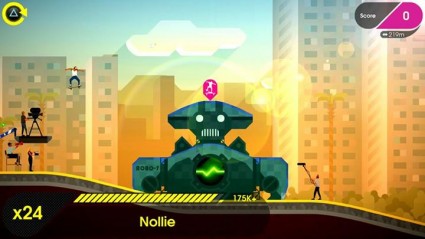 Giant robots make any video game better. If we actually implemented review scores, giant robots would have earned OlliOlli 2 at least another point or two out of ten.

On the surface, everything else is very much recognisable to fans of the original. Playing like a skating platformer, the levels are crammed with objects to grind and hazardous pitfalls to avoid. The true genius of OlliOlli has always been not so much the levels themselves, however, but the way you traverse them. The left analogue stick acts as a representation of your legs – hold it down and you’ll brace yourself; let go and you’ll leap, or ollie, into the air. Flicking it in various directions will perform a range of aerial tricks, or grind on a rail as you approach it. It’s a system which takes time to master, but once you’ve grasped the basics it’s intuitive and grounds you in the movement of the your character.

The previous moveset was challenging enough, but OlliOlli 2 ramps it up another notch. By tapping a direction along with the X button simultaneously as you land, you’ll pop a manual. This can be combined with the new revert landing – hit R or L + X as you land – following it up with a directional input just at the right moment. These new tools in your arsenal are ideal for stringing together massive, level-long combos but, as you can imagine, they’ve resulted in adding a further layer of complexity. As if that wasn’t enough, you don’t have to stick to simple grinds any more: pull off a ‘perfect grind’ (hit the rail with flawless timing) and you’ll be able to grind switch, swapping to a different type of grind to boost your score and combo meter.

It’s actually quite a lot to take in. The level challenges certainly haven’t gotten any easier with this iteration, either. Each stage has five goals to meet, ranging from a high score or combo count to beat, to grabbing hard-to-reach collectibles or pulling off certain tricks. These start off painless enough but get fiendishly tricky in the later levels, and once you’ve completed all of the standard challenges for a stage you’ll unlock a new set of hard ones. If you’re somewhere near ‘superhuman’ on the ability scale, you’ll breeze through all of these and open up punishing ‘Rad’ challenges. I wish I could say I actually got that far, I really do. 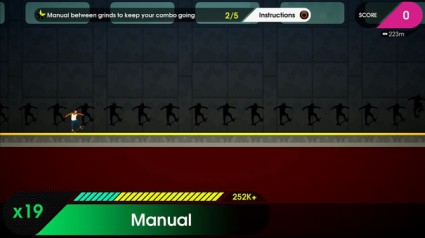 A range of simple, helpful tutorials exist to ease you in gently/lull you into a false sense of security

In a crucial and merciful design choice, ‘retry’ has been mapped to the triangle button. You’ll be needing that. A lot. This and the bitesize length of each level help to somewhat mitigate the agonising torment of having to restart over and over again in order to nail that last elusive challenge. The ‘one-more-go’ pull is strong, and it feels so satisfying to finally triumph over a troublesome objective. Nonetheless, frustration can set in at times – unless you’re a glutton for punishment, I’d recommend you tackle OlliOlli 2 in short bursts. It’s much more well-suited to this.

Further reinforcing this is the Spots mode, cherry-picking a small section of each level and challenging you to score as highly as possible within it; and Daily Grinds, once-a-day trials in which you get unlimited practice runs but only one shot at setting a record. Both of these compare your scores against online leaderboards, letting you realise how truly mediocre you are. Or maybe that’s just my own experience.

With OlliOlli 2: Welcome to Olliwood, Roll7 have proven that they know how to make a good sequel. They’ve taken what made the original so addictive and compelling and built on that platform, whilst fixing some of the gripes that could be had about its visuals. The result is a slicker and tougher beast than its predecessor, and feels like a more successful realisation of the original OlliOlli vision.

I’d have enjoyed a higher quantity of content this time round – the 25 short stages and handful of modes achieve no better than complete parity with the first game – but this is not so much a criticism. Rather, it’s like: “That was a seriously delicious steak. I could have wolfed down another of those”. I guess I’ll have to curb my appetite until the release of OlliOlli 3.

OlliOlli 2: Welcome to Olliwood is cross-buy between PS4 and Vita, and is free as part of March’s PlayStation Plus offering!