Being mainly a console gamer for most of my life, the apprently epic title that was Painkiller completely passed me over. I was also about 14 when it came out and so much too young to get hold of it in the shops. After a bit of research I found that not only was a it a smash hit (despite borrowing heavily from Doom and Quake), it also had a massive run of expansions, mods and different versions keeping it going over the years.

Originally crafted by People Can Fly, whose latest FPS foray Bulletstorm was an interesting and hilarious take on the genre, developer The Farm 51 has decided to remake the vanilla game and repackage it for a new generation. With its gameplay rooted firmly in the wave-battle style of the FPS pensioners, can it really satisfy today’s plot-hungry audiences?

I could write a (short) paragraph on Painkiller’s epic plot but I feel I’d be wasting my time. Told through a series of averagely-acted cutscenes, it serves only as a means to transport you from one relentless killbox to another. It has something to do with the mellow-sounding Daniel Gardener, who in a moment of dumbness ploughs his ride into a tree, killing himself and his lovely wife in the process. Sent to Purgatory while his missus is shipped off to Heaven, Daniel is told he has to kill Satan’s four generals in order to purify himself so he can see her again.

Like I said, the plot is either secondary to the gameplay by design or so plain that it just feels that way. It does the job as far as linking the locations and giving the slaughter some vague air of context, but I’m guessing no-one plays games like this for the plot nuances. It’s all about the mindless genocide of billions of evil things, and Painkiller certainly serves up a gargantuan feast in that department.

You start with a shotgun…
Painkiller’s gameplay will be familiar to anyone who grew up on Doom and Quake. You go from room to gruesome room committing mass murder against all manner of wacky demons, witches, ghosts, skeletons and other spooky shit. The range on offer is at least varied, although never seems to break the standard hell/demon/monster mode that often. This does lend the game a quirky, almost Halloween feel though, which I quite like.

The weapons are the real stars here. You begin with a beastly shotgun as your basic weapon and it only goes up from there. A vicious spinning mêlée claw thing, a stake launcher and a rocket laucher/mini-gun combo are just a few of the tools on offer, and they all allow you to mulch through the waves and waves of enemies with immense enjoyment. There’s always a plentiful supply of ammo as well.

Each enemy killed drops glowing stuff and if you collect 66 bits of it (oh, very good) you turn into a crazed rage-demon thing for a short time. This makes you invincible and unstoppable and can be very useful in a tight spot; although, the almost random nature of it makes it difficult to use tactically.

Levels follow a basic pattern that goes something like this: rooms full of enemies, big boss battle, cutscene, room full of enemies, etc. Although the environments and enemy types are constantly shifting and changing, the core gameplay never leaves the ‘shoot everything and don’t die’ corner. 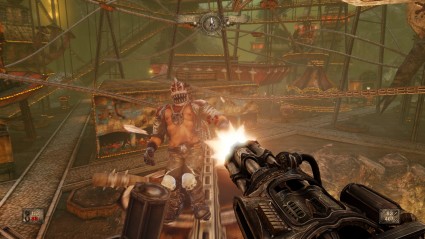 This is pretty much every level...

It’s this staunch position in the old-school that is both Painkiller’s biggest draw and its greatest downfall. Fans of the original game will likely be overjoyed with the fresh HD graphics, new weapons and tight frame-rate, but newcomers used to the FPS delights of Halo and CoD will probably get bored quickly.

The FPS genre has come on leaps and bounds since the days of Painkiller, and no amount of shiny textures can hide the fact that the one thing which hasn’t moved forward one iota is the gameplay. While the hench bosses and lighting-fast combat are exciting, it doesn’t take long for it all to become one big, mushy, horror-movie blur.

A nice-looking blur, though
One thing The Farm 51 have certainly nailed is the graphical updates. While it isn’t the most beautiful game in the world, Painkiller looks a ton better than it used to and could never be called ugly. Environments are rendered with a nice level of detail, and enemies explode and scatter entrails all over the place.

The level design is the real triumph here, although that has nothing to do with the remake. Each one is unqiue and varied while still keeping the spooky, gruesome template. Enemies are generally suitable for the area and despite the repetitive nature of the gameplay, each stage is a bloody gauntlet of fun.

Boom, chack-chack
Painkiller’s sound comes from the same era as its gameplay and seems largely unchanged in the remake. Everything booms and cracks with over-the-top efficiency; the stake gun sounds like a ballista while the shotgun sounds like about four guns being fired at once. Enemies squeal and scream and splatter into bloody claret with juicy and satisfying sounds, and when the shit hits the fan Painkiller is a feast for the ears.

Something has to be said for the music, but not much is appropriate. It’s there, you can hear it, it underpins the slaughter. It’s not repulsive.

The voice-acting could be described as ‘mediocre’, but that would probably be a bit too generous for me. It’s average at best, with only the key central characters getting any sort of professional attention. I thought it could be down to the age of the game, but after looking into it I got the impression the original didn’t actually have voice acting so there’s that theory out the window. It just seems like dialogue was an afterthought for the developers, which considering the kind of game this is wouldn’t be too much of a sin. 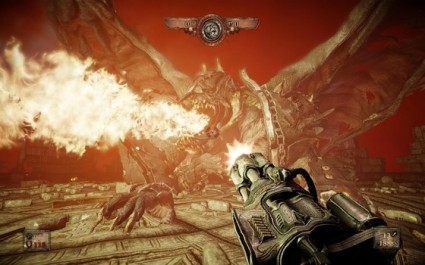 That demon really wants to be a dragon...

Lonely slaughter
The multiplayer on offer is a mixed bag. The chief addition for the remake is a full co-op campaign mode so you can tackle the relentless hordes with a friend. Great in theory, somewhat more difficult in practice. There’s hardly anyone playing on their own and waiting for a stranger to drop in, which makes finding a random partner very difficult. Unless you have a mate who owns the game, you’ll likely have to push through the campaign by yourself.

The one game I did manage to get into over my hour of trying somehow turned out to be a boring area battle with infinite ammo (?!), an appealing framerate and a guy who just had to keep shooting me between waves, because God forbid he took his finger off the fucking trigger for two seconds.

As for the proper multiplayer… well I think ‘disaster’ would be appropriate. While there’s a number of game modes on offer including staples Deathmatch, TDM and CTF, there’s literally no-one playing them. The server list is full of official servers that are entirely empty. I did manage to get into one locally-hosted game before it closed randomly after five minutes. In this time I experienced all the norms of the twitch-shooter genre: endless circling, jumping continuously, people who seemed to always have armour, and dying in one shot while pumping round after round into others with no luck. Harrowing, depressing and most of all hugely off-putting. Unless you have nerves of steel and some sort of maniacal need to get good at the multiplayer, I’d say stick to your CoD.

For a game set firmly within a genre that pioneered online multiplayer and still leads in player figures, Painkiller’s offering is woefully under-serviced and barren to say the least. While it didn’t bother me too much, my apathy towards competitive multiplayer considered, if you’re looking for another kill-fest to sink your teeth into you’re looking in the wrong place.

Painkiller or just Painful?
There’s nothing inherently wrong with what makes Painkiller what it is. It’s a brutal, agile, frantic slaughterfest the likes of which just doesn’t exist these days. It’s a feast for the senses and a great way to excise those murderous urges we all feel from time to time, so shitty the world is these days. Its nonsensical plot and piss-poor voice-acting is almost irrelevant; the gameplay is where it’s at.

Its frankly ancient mechanics and lack of any real variation prevent me from totally recommending Painkiller, as well as a bunch of other things. The multiplayer is barely functional, the frame-rate has a tendency to stutter for no reason and it can be glitchy and buggy to an annoying end.

It’s just so bloody old as well. I imagine Painkiller like a geriatric shock-show performer, once great and playing huge stages in London and Paris, now ageing beyond his abilities and reduced to working men’s clubs and the odd student piss-up party. Then someone comes along and offers him a full plastic surgery makeover, facelift and all. He emerges a younger-looking man, with some of his vim and vigour renewed, but at the end of the day he’s still falling to bits and his brand of entertainment has long been overtaken by more complex, nuanced and modern art forms.

There’s only so far you can bring an old game back from the dead and while The Farm 51 have managed to resurrect some of the joy Painkiller brought the masses all those years ago, all they’ve managed to do is create a semi-living walking corpse with make-up on. If that’s your thing, feel free to indulge.