When you think of a role-playing game, what comes to mind? Skyrim? Final Fantasy? Dark Souls? There’s no doubt that the RPG genre has seen many forms over the last few decades. One of the earliest forms was popularised by the likes of Planescape: Torment and Baldur’s Gate: top-down, party-based fantasy role-playing games heavy on text and tactical combat. With more powerful systems at our disposal, we’ve long had a decline of this style in favour of more accessible first-person and third-person action RPGs.

A recipe for success on Kickstarter is to invoke nostalgia, however, and it’s through this that many older genres are making a comeback. Obsidian Entertainment proposed a return to classic RPGs with Pillars of Eternity, and with over 77,000 backers showing their support, it’s successfully launched. Pillars of Eternity is unquestionably a powerful nostalgia trip, but let yourself become immersed in its depths and you’ll discover that it’s so much more besides.

Any classic RPG worth its salt will have a character creator, and Pillars does not disappoint in this regard. On starting your adventure you’ll be customising every aspect of your player character, from race and appearance to class, skills, stats and more. There’s an extensive amount of different considerations to make so beginners may benefit from a quick glance at a build guide, but with only your main character to worry about in the beginning it’s not too overwhelming.

With your creation thrust upon the world, you’ll play through a beginning scenario which is quite self-contained from the main game in order to introduce you to its systems. This culminates in accidentally acquiring special powers of insight against your will, which grant you the status of ‘Watcher’. These new powers let you see into a person’s soul, uncovering flashbacks of their memories and emotions, which is both a crucial plot device and gameplay mechanic. Countless times you’ll be able to tell if someone is lying, and see visions of what happened in the past – and use this knowledge to your advantage. 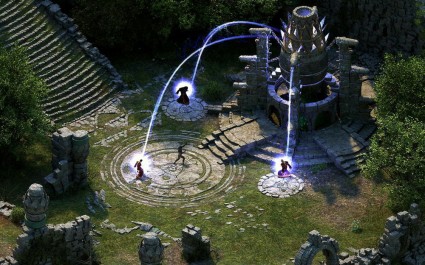 It’s a case of wrong place, wrong time for your intrepid adventurer.

The first few areas are somewhat linear in their progression, but fascinating nonetheless. It soon becomes apparent that all is not right in the world, with tyrannical leaders, faction conflicts, curses and violent beasts causing a lot of misery and suffering. After some time you’ll come to inherit a cursed, dilapidated mansion estate, which over time can be built up to provide a whole host of bonuses à la Assassin’s Creed. It’s here that the world map starts to truly open up, and you can see how dauntingly large Pillars actually is.

It’s not that the world map is enormous, per se, but there is so much to see and do within it. Crucially, however, Pillars of Eternity is a seriously slow-paced game. It’s hard to illustrate the point without giving the wrong impression, but everything takes a lot of time. There are reams and reams of text to read, in books, descriptions and dialogue – some, but not all, of which is voice-acted. You’ll want to explore every nook and cranny of the towns, forests and buildings you discover. There are decisions to ponder over and a host of NPCs and environments to examine and interact with.

Chief amongst the gradual progression through the game, however, is the combat. Fighting in Pillars moves at a glacial pace, and this is by design. Combat is actually in real time, but with a party of six and a bevy of complex systems to worry about, those who don’t possess superhuman reflexes will need to utilise the pause feature. A lot. Like, a hell of a lot. Most of the time you’ll be at a standstill whilst you individually order each party member to employ various skills and spells, whilst monitoring their current status and the actions of their opponents. It should be a chore, but it’s nothing short of engrossing. 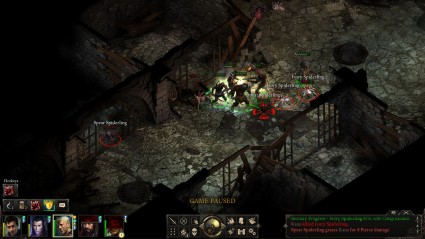 There are not one, but two ‘health’ bars to watch out for – a standard health level and also an endurance meter. If a character loses the latter they’re knocked out until the end of the battle, but if they’re drained of the former they’re left with severe stat penalties until you rest, and are at risk of being killed permanently. Amongst the huge list of skills and spells, some are limited by each encounter but others only give a certain amount of uses until the next rest. You’ve got all of the usual RPG staples to consider – resistances, heals, buffs, debuffs and AOE effects – and the latter have to be positioned wisely to avoid friendly fire.

Needless to say, it’s actually quite challenging. I started on ‘Easy’ and only pushed it up to ‘Normal’ when I was feeling more confident. There’s no ability to grind if you’re feeling underpowered, because experience points are only earned by completing quests – and level-ups are few and far between. On paper this sounds like an odd design decision, but it’s at the heart of the sheer amount of choice available to the player in Pillars. Don’t get me wrong – you can’t complete the game without having slain an enemy or two – but opportunities abound to weasel out of encounters via sneaking around or making use of your silver tongue. It would be unfair to penalise players who choose a more pacifistic route, so this ensures that you receive adequate experience no matter how you complete a quest. 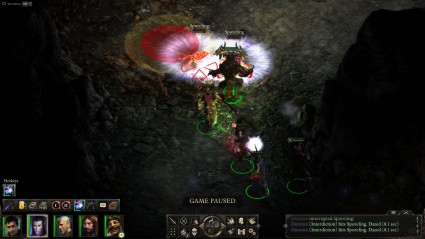 You could actively avoid a fair few encounters during the game. Could being the operative word. You could just kill everyone…

What’s fascinating is how situations are rarely binary. If you’ve been tasked with stopping an ‘evil’ sorcerer, you could kill them, or otherwise put a stop to their actions, but there’s likely to be more to the tale than meets the eye. Perhaps their methods were questionable, but they had good intentions. You could leave them to their devices, or even turn against the character who sent you after them in the first place. Each choice will yield different rewards, dialogue interactions and potentially affect your reputation with a certain faction or town, but regardless you’ll receive some exp at the end of it.

The freedom you’re afforded, along with the heavy amount of reading material at hand gives Pillars the feeling of a Choose Your Own Adventure book. In lieu of cutscenes and quick-time events you’ll come across little narrative sections where you’re given a list of choices, each providing a different outcome. These are a charming alternative to more high-budget solutions and feel very congruous with its personal style. With a birds-eye view and limited animation, much of the character interactions are described through passages of text, as are all of the flashbacks you’ll uncover with your Watcher abilities. It goes without saying that if you’re a slow or unenthusiastic reader you should bear this in mind. Rest assured though that it’s all beautifully written; the creativity and imagery infused within it are wonderful to behold. 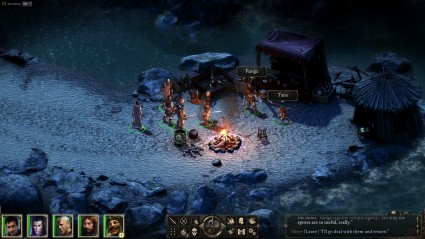 Time for a chat – reading glasses at the ready!

The world of Pillars is also nothing short of a delight to explore, with imaginative, hand-drawn environments. You earn that all-important exp for every area you discover, and are guaranteed to stumble across new quests, making exploration a rewarding endeavour. On a technical level the graphics are quite primitive and very much reminiscent of its forebears, but it makes up for this with the quality of its visual design. The soundtrack and voice acting are also surprisingly competent and really help to bring the world to life.

All Pillar, no filler

I’ve already made this analogy, but Pillars of Eternity is very much a novel in video game form. It’s deep, evocative and sometimes a little heavy-going, but the pay-off is very much worth it. The story effectively engages and is moulded to some extent by your own choices, and you’ll want to explore every inch of its compelling fantasy world. Some newer RPGs have perhaps lost sight of what originally defined the genre, but this is a role-playing game in the truest sense.

Pillars openly takes influence from Baldur’s Gate, Icewind Dale and other classic RPGs, but you may have noticed that I’ve not made any direct comparisons to any of them. This is because, criminally, I’ve never actually played any of them. On paper this is a game tailored to satisfy the nostalgic whims of a target audience of gamers I’m not part of, but as testament to its surprisingly broad appeal, I fell in love with it. Pillars of Eternity is a 50+ hour role-playing game; an absorbing, malleable experience; and a tale which you’ll relish every page of.