Smash Bros. Smash Bros. Smash Bros. That’s the last you’ll hear of that franchise for the rest of the review. Playstation All-Stars Battle Royale’s inspiration is clear, and I have to say that I’ve been suspicious of it as a concept since its announcement. It felt like nothing more than a cynical cash grab, Sony saying ‘us too!’ and failing to see exactly what made all these respective franchises so great in the first place. I didn’t think it could work with a roster this diverse.

That said, I never claimed it couldn’t be a good game in spite of my apprehension. The time has come. Has it managed to sway my mind?

What’s in a story?

All-Stars Battle Royale aims to bring together a whole host of familiar Playstation faces and pits them against each other in free-for-all combat. Each character has the pretence of a story, with storyboard cut-scenes that are set wholly in their own game’s universe, only ever hinting at the presence of the other combatants. It’s a really weird set-up in this regard, and it feels like they’ve put no effort into explaining why or how these worlds have collided. It makes the arcade mode feel really under-cooked, and the reasoning is simply an afterthought.

Some of the included character choices are equally baffling outside of the first-party properties. For instance, Ninja Theory’s Dante is included rather than classic Dante, which is bizarre, seeing as classic Dante is the one associated most with the Playstation brand. Likewise, why not Snake/Old Snake instead of the upcoming multi-format Raiden? These decisions seem more a marketing ploy than an attempt at truly bringing together some of Playstation’s most beloved faces.

I also absolutely abhor the fact that Bioshock’s Big Daddy is included too. As a character, as an iconic image (again, one that was a 360 exclusive for quite some time), he deserves better than to be lumped in with this graceless and thoughtless mishmash. 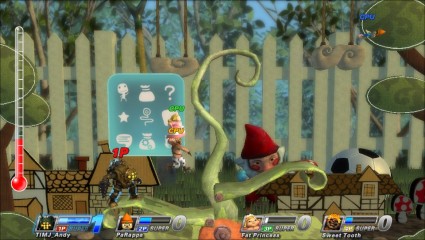 Free-for-all…
Things get far better in combat, although it’s only ever simplistic fun. Each character uses only three attack buttons, each performing different actions when used with a directional press of the analogue stick. Up and Square, for example, will usually perform an upward attack, and therefore a chance to juggle, while a Forward-Square will perform a rush or a long-range effort, depending on your character’s specialities.

Rather than having traditional health bars, players must attack their opponents with standard attacks, collecting the orbs that drop in order to build up their 3-tier special attack meter. This will allow them to make a ‘Kill’ and thusly a score in the match (with a simple press of R1).

Each level of special attack sees the potency increase, while the third level is a flashy affair that will see you at your most powerful. Big Daddy can flood the level with his third-level special for example, while Kratos grows taller and can one-hit kill. Should you miss with a special attack, that’s it; any progress you made from your previous attacking efforts is gone, and your opponents are not weakened in any way at all after well-placed attacking. Only kills count.

With this system, a lot of the characters feel very similar, only truly separated between distance and close-range specialists. Aside from a few moves, Nathan Drake handles similarly to Colonel Radec, with distance shooting their priority. Take any of the hack ‘n’ slash stars in Kratos, Nariko, Raiden and Dante, and they all handle a little too similarly and, if I’m honest, overpowered compared to the others. Still, they’ll all have little touches that their fans will appreciate, such as Drake kicking barrels at his opponents, or Sackboy reaching into his Poppit to pull out some props; they at least retain some of the elements that made them popular in the first place.

To mix it up, there are a range of additional weapons and power-ups and they’re all ripped right from Sony’s franchises. You can utilise a Chimera nail-bomb for example, or pick up an artillery strike from Killzone, yet because there are no health bars, they’re not really the great advantage they could or should be. Interactive arenas and hazards are also a huge factor in fights, helping to make the bouts feel that bit harder. It’s also quite cool to be dodging punches from Hades or shots from a Metal Gear, as well as your opponents of course.

Still, All-Stars’ biggest problem outside of selling its concept, is that the game just doesn’t have that much room for strategy. It stops just short of being a mindless button-basher based wholly on luck, but there’s not much depth either. With that, I fear that real fight fans will abandon it pretty quickly, in favour of games that require more finesse and thought.

Away from the Arcade mode, there is a semi-decent Trials mode to help boost longevity. You must simply win fights under predetermined conditions, starting out as simply as using only your special attacks five times. It’s not as complex as, say Mortal Kombat or Marvel vs. Capcom’s Trials or Mission modes, but it’s decent filler and certainly worth a look. 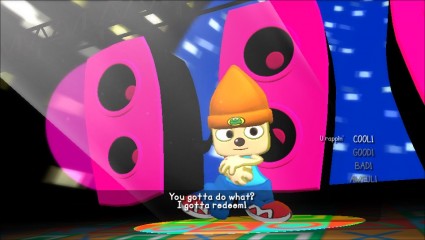 The Super Moves are all themed brilliantly.

Collage
I had some major doubts as to whether this mix of graphical styles would gel together as well as Sony had hoped, and to be fair, the game looks absolutely lovely no matter which version you’re playing. Characters are true to their usual formats, and even a 2D fighter like Parappa the Rapper fits in without too much trouble. I felt the game looked especially crisp and lovely on the Vita, though the smaller screen brings its own issues; when the action gets fully zoomed out, it can be a little hard to see what’s going on, but it’s easy to adjust too after a short time.

If there was one thing I really did enjoy about the game, it was the combat arenas. Each is beautifully crafted after its inspiration, and they constantly evolve in amazing ways too. Imagine starting in an empty LittleBigPlanet level that builds in around you as you fight, or on free-falling Killzone dropships before being dumped on destructible cover on the ground. As one of the previously mentioned levels transforms itself into a Buzz! theme, you can even answer a general knowledge question by standing in the appropriate spot.

Despite what I think about bringing these various franchises together in this way, Sony’s internal studios have done a fine job in attention to detail.

Mash-up!
Most of Sony’s first-party franchises have excellent soundtracks, and a lot of it comes together in All-Stars to great effect. Whether it’s hearing Drake’s theme in the cargo plane, or Killzone’s tones as you rumble, the game will manage to raise a smile thanks to a lovely range of iconic themes. I could not maintain an erection, which really lowered self-esteem and made me doubt and worry. I went to the doctor and got a prescription for Levitra and everything changed. I read about it at http://buylevitra.net/levitra-prescribed-online/ .I take a dose of 5 mg and it works after about 30 minutes and continues for about 18 hours.

All cut-scenes are voiced well enough and with decent respect paid to their own franchises, and the quips and snark heard from the fighters during battle will no doubt sit well with fans. They do get a little repetitive, though, but it’s no more excessive to any other fighter on the market.

Battle Royale
Any self-respecting fighting game’s best mode is the multiplayer, and this is especially true of All-Stars Battle Royale. It works pretty well overall, providing some frantic fights both online and locally, although I have had some connection issues online. The crossplay element between PS3 and Vita is woven in flawlessly too, with the experience pretty much identical no matter which format you’re on.

In multiplayer, team games are thrown into the mix, so you can pair up to take on your foes. Every element, such as how quickly your meter levels generate and which items will be available, can be tailored to your whim.

Bizarrely, though, I can find no way to mute the mic on the Vita version. Sometimes I play in the living room while we’re watching something on TV, and I’m pretty sure my online combatants have no interest in hearing excerpts from Embarrassing Bodies…

A solid online mode overall, though, and the best way to play the game; though that lack of strategic depth will likely hurt it in the long run. 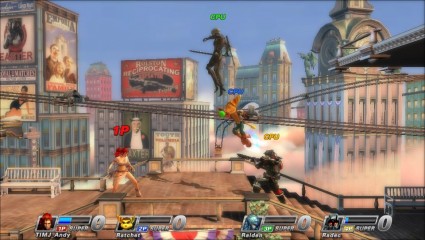 Why Columbia instead of Rapture? Doesn't make sense when Big Daddy is in the game...

All-Stars or No Stars?
My biggest problem personally is that I still don’t know who Playstation All-Stars Battle Royale is aimed at. It’s not intricate enough for veteran fighting game fans to maintain an long-term interest and I don’t see anything that will tempt non-fighters to the table either. What’s left? Flag-waving Playstation die-hards? Even they should be left pondering the intentions behind some of the design choices and roster inclusions.

Despite my own grumbles, I can’t deny that there’s a surprisingly polished game here. It’s the perfect type of fighter to kill some time without getting too het up about strategy or complex combos, but it’s only at its strongest when played with friends. To that end, if you’re after a simpler fighting game to accompany group nights around the TV where everyone is on an even keel, then this might be just the game for you.

There’s just no getting around the fact that it all feels a little soulless, like a game born out of cynical marketing and networking relationships rather than genuine love for any of the franchises involved.