When first announced, I thought the PlayStation TV to be a curious direction for Sony. The Vita, despite being one of my favourite consoles in recent years, has obviously not sold as well as they’d hoped, so stripping away its most interesting hardware features and turning it into a microconsole left many wondering just who this reformed device was actually aimed at.

Still, with Remote Play allowing you to enjoy next-gen games on any TV in the house without having to move your PS4, not to mention plenty of excellent games available for it, if you’re already invested in PlayStation, then you might find it worth a look.

Sleek and solidly built, the PlayStation TV isn’t much bigger than my iPhone. The front is graced with one HDMI, USB, Ethernet port apiece and, of course, a socket for Sony’s proprietary memory cards. One of its curved ends also hides a slot for card-based Vita games; handy for those that don’t like digital content or paying for sizeable memory cards, while the power cable slots simply into the back.

Its diminutive size makes it extremely portable, which is handy for obvious reasons, and I was able to shift it around the house between our family room, bedroom and office with minimal effort. That said, it never really looks neat and tidy on a TV stand or in an entertainment unit. 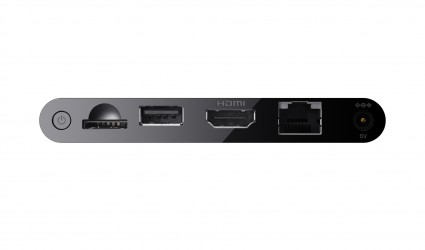 Simple, sleek, but a little impractical

Powered up, I found it a tad clunky to navigate the Vita’s menu with physical controls only. It was originally designed for touch interaction, of course, so it’s perhaps inescapable that there’s a little clumsiness because of that. Still, every function possible on the Vita screen is possible here using the buttons of whichever pad you decide to use (both PS3 and PS4 are compatible), including moving icons around and grouping them in folders – it just takes a little bit of retraining if you’re used to the Vita itself.

The most confusing aspect of PlayStation TV, however, is that not all native Vita games are compatible, due mostly to their reliance on touchscreen interactions. It definitely misses some highlights, such as the touch-heavy Tearaway, but it’s still an impressive list that spans many genres. If you already have a Vita or even some cross-buy games for PS3/PS4, then you’ve likely already got some content ready to go.

Bigger budget games, like Killzone: Mercenary (vastly superior to its PS4 counterpart), Borderlands 2 and Persona 4 Golden are now playable with a DualShock 4 or 3 on the big screen, which I had much fun doing, while the likes of Ultimate Marvel vs. Capcom 3 and Final Fantasy X HD are also welcome additions. The device particularly excels as a showcase for indies too, with Hotline Miami, Luftrausers, Retro City Rampage, Lone Survivor and even Telltale’s The Walking Dead all perfectly playable. Aside from the occasional stutter on that last one, they perform just as well as they do on other platforms.

Throw in countless PSP and PSOne Classics, and PlayStation TV starts to look like a more desirable product, especially if you’d rather play your indies on the big screen or simply want a way to experience tons of classic PlayStation games. I tried out both Silent Hill (PSOne) and Valkyria Chronicles 2 (PSP) and while they definitely look better on the Vita’s smaller screen than stretched out on a HDTV, it’s more than serviceable. The full list of compatible titles can be found here.

Unfortunately, some issues with the store do sour the experience from a buying perspective. For example, eager to show my wife a trailer, I decided to download the YouTube app. It wasn’t listed under ‘Apps’ on PSTV’s store like it is on Vita, but it was there when I searched for it. It wasn’t until I downloaded and tried to start it that it finally told me it wasn’t compatible with this device. Annoying. 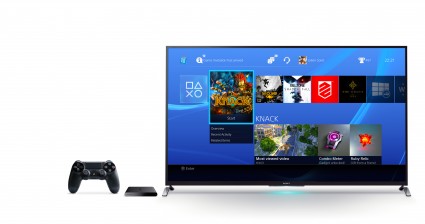 Remote Play on a big screen – this has been my favourite feature.

Sony is pushing the device hardest as a way for people to play their PS4 remotely in any other room on a big screen instead of the Vita. It’s good, then, that remote play on PlayStation TV performs flawlessly, even better than in my mostly positive experience with the Vita.

When sat playing remotely on my Vita in the family room, for example, I’ll sometimes get patches of network interference, pausing and occasionally even some disconnects. Yet, when playing Dragon Age: Inquisition and Grand Theft Auto V via PlayStation TV on the TV in the same room for some length, I’ve experienced neither of these issues at the time of writing. Certainly, you still have the slightest degradation of visual quality and a barely noticeable hint of latency, but this feature is about convenience and flexibility, and games do still look great, even when streamed in this way.

Sadly, what isn’t convenient is that it’s impossible to sync pads wirelessly, meaning that if you’re not planning on having a dedicated controller for your PSTV, then you’ll need to move your pads and a mini-USB cable around with you to make the switchover.

Also less desirable is that just like the Vita, you’re unable to have more than one account on a memory card. This will be a huge issue for some, I’m sure, though in a multi-Vita household just like ours, switching your own memory card from Vita to the PlayStation TV hasn’t proved too much of a hassle, rather a mild irritation. Thankfully too, you can still have your account on multiple cards, which is what I’ve taken to doing, recycling an old 16GB card I otherwise no longer use.

Lastly, it’s worth mentioning that if you’re in the right regions, namely America, then you’ll also be able to play any number of PlayStation games through the PlayStation Now service. This is not something I was able to test, and being based in Australia with PM Tony Abbott and Malcom Turnbull actively blocking technological progression, at least on network infrastructure, I doubt I’ll have that option any time soon.

Useful but not essential…

Despite some system clunkiness, if, like me, you’re already well invested in Sony’s gaming ecosystem (I have a PS4, Vita and have bought a ton of digital content over the last few years), then the PlayStation TV could be a useful device for you. I found the Remote Play to be more stable than that of the Vita’s, and it allows you to experience your games full screen on any HDTV in your house. Its list of native, compatible games features plenty of gems in spite of not featuring all of them, and it works well as a dedicated device for both indies and PlayStation classics, if that’s your bag.

I can’t help but feel, however, being priced at $150 here in Australia, that it’s probably $50 too much to implant it in the buying public’s mind, especially considering we’re unlikely to see PlayStation Now any time soon.