It’s rare that a game is so heavily crafted with surprises that it’s physically difficult to even write a review about it without giving everything away. It’s for this reason that Pony Island is a first for me in not only the experience it provided whilst playing it, but the challenge it set in summarising and evaluating it for you, dear reader.

I’ve honestly tried my best to avoid specifics wherever possible, but please be aware that the mildest of spoilers are contained within. Pony Island begins as something reminiscent of a throwaway amateur project lurking deep within the annals of the Android Play Store. A sickly-sweet introduction menu leads into an inane initial episode, as you make use of a simplistic tap-to-jump mechanic in order to guide a pixelated pony over small gates and through to a victory flag.

Thankfully, it’s apparent from the off that there is a lot more going on than meets the eye. In what is the first of countless holes broken in the fourth wall – of which is eventually left decimated into dust by the end of the game – you’re unable to even start playing properly without finding a workaround for the broken, badly-coded main menu. 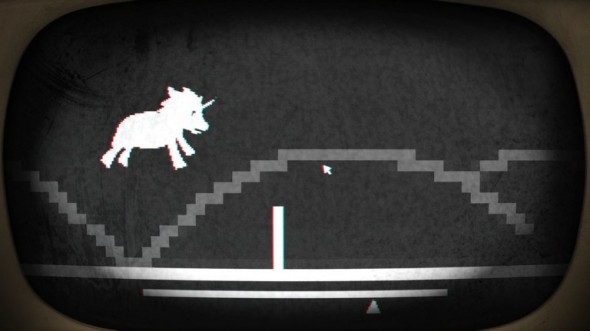 If this was all Pony Island consisted of, this review may have turned out somewhat differently.

The more progress that’s made from here, the further the player descends into madness. Jumping ponies are only a skin-deep facade for a soul-stealing arcade machine which is as profoundly corrupted in its satanic villainy as it is through its poorly-written code. In order to escape the evil clutches of Pony Island there is no choice but to play by its twisted rules whilst simultaneously doing your best to break them.

You’ll jump your way through various iterations of its pony levels as the mechanics warp and evolve over time, but as you exploit crashes and corruptions in its programming, things really get interesting.

Delving into the very operating system of the arcade machine, you’ll navigate graphical user interfaces which require breaking, then fixing, then probably breaking again. These often lead to one of the recurrent challenges faced throughout Pony Island – programming-based logic puzzles. Here, directional markers need rearranging in order to guide an element through lines of code and activate a function at the end.

Over time these increase in complexity to the point where you’ll have to make several variables meet a certain value in order to qualify ‘if’ statements – but even though these puzzles give your brain a pleasing tickle, they’re never overly arduous or frustrating. 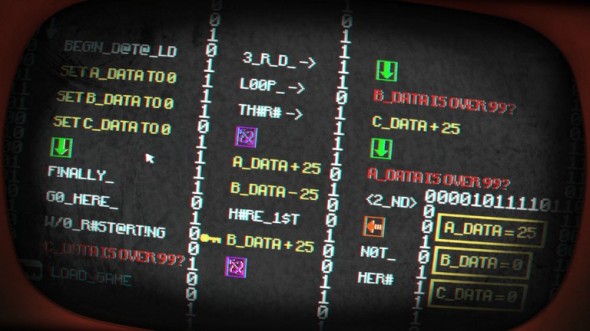 You understand what’s going on here, right? Thought so.

Pony-jumping and coding-lite aside, what really sets Pony Island apart is its constant ability to delight and bewilder the player, in equal measures. Nothing about its design is technically astounding, nor are the ‘gamey’ aspects original or even particularly engrossing. Set within the context of a deeply self-aware entity which endlessly satirises both itself and video-games as a whole, though, it’s irresistible.

The several humorous virtual allies and antagonists introduced along the way, accompanied by their frequent attempts to trick and undermine you, help inject a heavy dose of personality and captivate you from start to finish. Again, I can’t go into details, but if you’re familiar with the infamous Psycho Mantis boss battle from Metal Gear Solid, you’ll have an idea of the level of deception which will be thrown your way here. 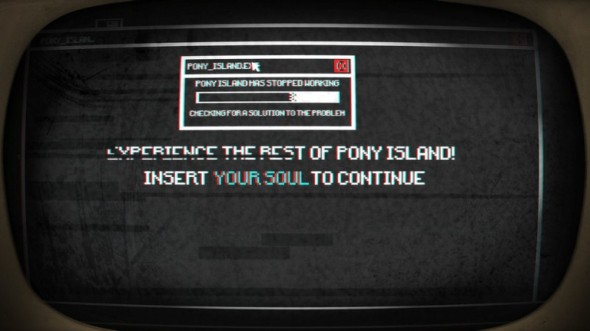 They weren’t kidding when they said that microtransactions were getting out of hand.

What comes as a relief is that the deliberately simplistic and trite elements of the game diversify just enough throughout to narrowly avoid becoming stale – and then it all reaches a satisfying conclusion, at the brief but perfectly-portioned 2-3 hour mark. Much longer and Pony Island would have started to outstay its welcome. Instead, it finishes on a high.

At just £3.99/$4.99 and a few hours of your time, Pony Island is a must for any fan of experimental indie games which subvert typical genre conventions and flaunt a blatant disregard for the fourth wall. If you enjoyed the likes of The Stanley Parable – heck, if you’re just curious for something a little different from the norm – then you know what to do.