I’ve said it a couple of times this past few weeks, but I love me some fighting games. Good thing that the Vita has served well in that respect so far, with Ultimate Marvel vs. Capcom 3 hitting as a launch title and Street Fighter X Tekken (squeeee!) not far off a port, either.

However, Capcom aren’t the only ones striving to bring the genre to the system, and no, I’m not talking about Arc System Works’ Blazblue.

Step forward Reality Fighters, the new fighter from Novarama and Sony; where you not only put yourself in the middle of the action, but also put the action in the middle of wherever you want, thanks to its clever use of Augmented Reality.

Should you be giving it a look, though?

Wax on, wax off!
In Reality Fighters, you begin by creating a character. You do this by using the either the front or back camera, lining up your face and snapping a photo, and the game will map your face directly onto your fighter. This does work remarkably well facially; however, when you add in the game’s hairstyles and other features it can look a little jarring, sometimes even creepy.

Once face-mapping is complete you can then customise your fighter’s features, clothes and fighting styles, with tons to unlock once you start earning points from fights. Do you want to be a boxer? A Kung Fu expert? How about a Zombie? This game has you covered.

When you’re happy with your chosen brawler, you’ll then tackle the single-player campaign where, I shit you not, Mr Miyagi of 80s Karate Kid fame (!!!) takes you under his wing and trains you by pitting you against all of his former students. 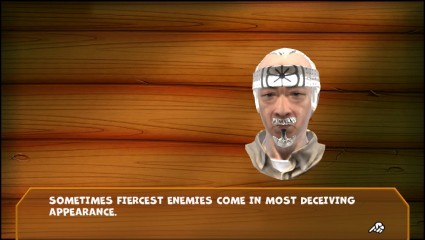 Mr Miyagi is literally in this game.

Basic button bashing
What should be apparent at this stage is that Reality Fighters isn’t aimed at a hardcore audience, offering a more simplistic and accessible form of fighting game. It’s colourful, light and breezy, and makes semi-decent use of the Vita’s features, although the game itself is very pedestrian in spite of some nice little touches here and there.

Each fighting style has standard kicks and punches, and just a handful of special moves, including a couple of Ultra Combo-styled efforts that are used when the bar below your health is all blue. Fighting styles are just about varied enough, making clever use of each style’s chosen theme. Unleashing the Ultra Combo for the boxer, for example, sees the corner of a boxing ring pop out of the ground as he pummels you against the ropes (ooh er), while the Zombie style can see you pull the other fighter under the ground. The Disco Dancer style attacks with all the moves and  grace of John Travolta, Saturday Night Fever style. It’s all refreshingly light-hearted.

The unique selling point of all this is that fights can take place wherever you want them to. While the game comes with a couple of preloaded and photographed locations, you can simply select the Augmented Reality option and see the fights happen anywhere you point the device; your desk, your garden, or at the end of your bed if you wanted. I have to admit, this is a pretty sweet thing to see, as you can probably tell by my screenies. 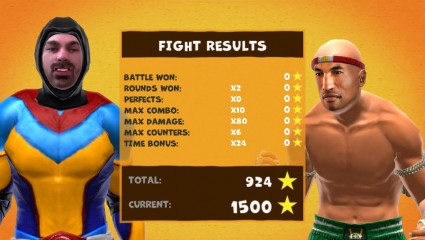 The facial mapping is quite decent, though I have a beard, not a handlebar moustache!

This does have an effect on gameplay at times. Occasionally, the fights move off screen, leaving you to then have to physically shift the device to see what’s going on; a little annoying if you’re a more laid back portable gamer like me. The screen also shakes about a bit has you hammer buttons, which does add a nice handicam feel, but it can be a bit disorientating at times.

The biggest problem is that while Reality Fighters is initially pretty fun (and it honestly is), the novelty soon wears off. There’s no real depth or incentive to keep playing. With no real strategy other than attack, attack, attack, fights quickly become repetitive spamfests thanks to the limited number of moves to perform.

That lack of depth in combat becomes a real issue without all that much to do. A run-through of the single-player campaign takes barely any time at all, and while it does unlock a weapons mode afterwards, it’s just the same campaign again with the same attacks; just now you can hit people with a weapon by holding RB and pressing a face button. It doesn’t change things as much as it sounds.

The Survival and Time Attack modes are nice additions, but once you’ve mastered the techniques for your fighter’s class (which will take minutes), they soon deteriorate into the same, dull pattern and become boring pretty quickly. Unfortunately, not even a change in a character’s fighting style can keep it fun for longer than a few days. 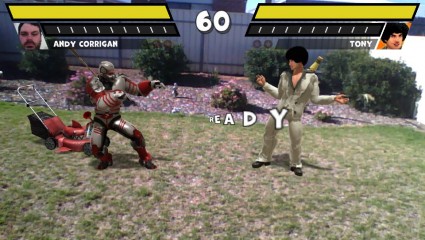 Yup, this happened in my garden...

Gorgeously rendered backgrounds… oh wait, no, that’s my living room!
In a way, Reality Fighters will only look as good as the environments you provide it, unless you’re using the pre-rendered backgrounds which do, admittedly, look lovely. The Augmented Reality backgrounds can seem a bit grainy, such is the quality of the Vita’s camera, but they do the job well enough.

Character models are okay for they are what they are; cartoony fighters with your own face plastered on them, but there are a decent amount of different clothes and accessories that you can pair them with once you’ve won a few fights. The thing is, all the elements are practically from set costumes, and the the single elements don’t really gel together well when separated and randomised. You either go for the same costume theme or look like you’ve been blindfolded and pushed into a charity shop with $50 in your hand.

Eye of the tiger…
The use of sound in Reality Fighters is fairly minimal on the whole, and although there is music accompanying the menus, nothing is truly remarkable or worth special praise. Attacks have decent impact effects, but nothing about them wows or hasn’t already been bettered since (or even during) the 90s.

Obviously since his passing in 2005, Mr Miyagi himself, Pat Morita, is unable to voice the character that he made his own. His replacement, much like everything else about the game, merely does the job.

As part of creating your character, you can record two sound bytes for your entry and victory; however, it does record these fairly quietly and at low quality. At the very least, it’s another step that allows you to really customise your fighter. 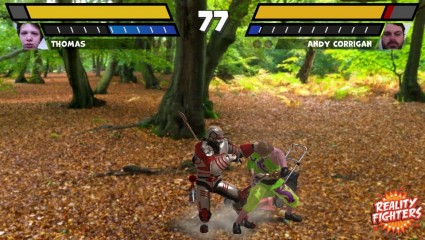 If you don't want to augment reality, there are a number of pre-rendered options.

It takes two to tango…
Reality Fighters makes it as one of the lucky Vita launch titles to have an online mode, but it’s far from fully featured. In fact, you can only take part in basic, friendly fights, with no other modes to help pad it out. That said, it is cool that you can pit your created fighters against others, while marvelling at how people have zero coordination when it comes to putting their costumes together…

Unfortunately, already it’s pretty hard to find a game. I managed just three in the space of an hour’s testing, two of which dropped connection, and one of those was before we’d even entered into a fight. The rest of my time was spent patiently waiting. The two games I had actually got to fight in were plagued terribly with button lag too, on a connection that runs Street Fighter X Tekken flawlessly. Not too promising.

That aside, the combat really doesn’t have the legs to carry an online community for any length of time; it’s just not strong enough.

Reality check?
Let it be said that there is some fun to be found in Reality Fighters; however, any appeal is extremely short-lived. It does some things admirably too; the implementation of Augmented Reality here is something that’s sold me a little more on the merits of AR, and I can’t wait to see explored further in the genre.

The game’s problems just about outweigh the good intentions, however. While not outright terrible, the combat system lacks painfully in depth and only ever works, never excels. What you’re left with is a limited fighter that might carry some favour with younger gamers or fighter first timers, but even then I’d point them elsewhere. Far from broken, but it’s just not fun for very long.