It’s not often that you get a handheld title ported onto home consoles. Most of the time we’re used to seeing big budget titles get shrunk down to fit onto handheld consoles, often with bad results. GTA on the Game Boy Color, anyone?

This is where Resident Evil: Revelations stands out. Originally released on the 3Ds, Capcom’s title has found its way onto the PS3 and the 360 as a full retail game. Does it work, or is it another Resident Evil game that’s more horrible than horror full?

We’ve all recovered from the mess that was Resident Evil 6, haven’t we? Terrible gameplay and an extremely bloated campaign has left me truly wary of going back into the land of RE.

I took some comfort in the fact that Resident Evil: Revelations was pretty well received when it was launched on the 3DS. Our own Andy seemed to enjoy it quite a bit. So with this being a near identical port, could this finally be a Resident Evil game that I enjoy?

With this being the same game as was on the 3DS we start with exactly the same premise. Resident Evil: Revelations takes place after Resident Evil 4 and before Resident Evil 5. Does that really matter? No.

The story’s just as ridiculous and convoluted as any precious Resident Evil title, though Revelations deserves credit for trying something a little different. The game is split up into ‘episodes’, including a rather well done ‘previously on…’ section at the start of each episode.

This makes perfect sense for handheld gamers, as the 3Ds is probably best used in 30 minute chunks, which is roughly the length of each episode. How well you think this works on home consoles will depend on how you’re playing the game. Sitting down for an eight-hour marathon gaming session? If so, you probably won’t ‘get’ the whole point of the campaign’s episodic nature. In fact, you’ll probably complete the campaign in that amount of time. 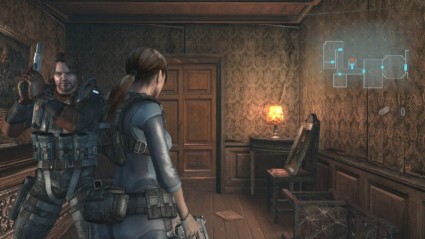 A few different locations, not that it matters.

Is eight hours too short? I don’t think so, not for this type of game. Resident Evil: Revelations tries its best to keep things as fresh as possible, by jumping about from location to location, character to character and even playing around a bit with the chronology of the story.

None of this ‘jumping about’ does anything to the game though. Characters all play the same and any location that isn’t the Queen Zenobia (the ship where you’ll be spending most of your time) isn’t visited for long enough to really care.

What’s also hard to care about is the story. Terrorists, government officials, satellites that blow stuff up. It’s C-Grade schlock, but it’s taken too seriously to be any real fun. The characters, the new ones at least, are horrible. With maybe the exception of Parker (just about), they’re all terrible people that I wanted to see get eaten.

Jessica, for example, is a gross representation of what’s wrong with female character design. She’s one-dimensional, swoons over Chris, gets mad when those feelings aren’t reciprocated and wears just about the worst clothing going. She also mentions that she has a ‘sweet ass’ at one point. Not even joking. Here’s a video clip. Ridiculous.

Sinking feeling
It’s not just the characters that I didn’t get on with. The bane of many a recent Resident Evil game has been its combat, and I found Resident Evil: Revelations to be no different.

Whilst attempts have been made to take the series ‘back to its roots’ with this game, it falls short. Tight and claustrophobic corridors reminiscent of the first game are in place. The huge problem being that these corridors are often full of enemies, which stops you feeling tense and instead turns the game into more of an action game than the game itself can handle.

Once again, combat is dull just like Resident Evil 6. Enemies in Revelations seem to be made out of water and as such just soak up bullets until an invisible health bar is depleted, at which point they melt away. What made Resident Evil 4 and 5 so enjoyable was that the combat felt like it had an impact to it. Zombies stumbling and clutching at their wounds. This is like shooting into thin-air until someone pats you on the back and says ‘good job’.

It’s not to say that enemies don’t have weak-spots, as they do – a loading screen told me so. The issue is that hitting a weak-spot doesn’t feel like a success and it doesn’t get a reaction. It all boils down to the health bar that you can’t see getting depleted quicker. 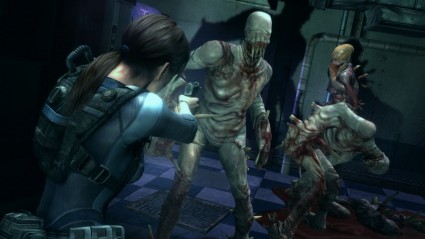 The enemies soak up a lot of bullets. Sound fun?

There are other enemies to fight, but it’s all so tired. Hunters hop about, dogs run fast and other nameless blobs of flesh will have a shield. It all about pointing your gun at the enemy and pressing fire until it dies. No running around environments looking for ladders to climb or kick down. No windows to jump through to gain a vantage point. Nothing of the sort.

Combat is more ridiculous when you discover your enemies’ greatest weakness. Doors.

Yep. If, like me, you tire of the game’s combat you just need to run right past the slowly shuffling monsters and into the next room. It seems that only humans have the ability to open doors and you’ve just dodged a dull piece of combat. Good job.

There’s a little more to the game, but not much. You can scan enemies and locations to unlock and find items. This can be handy as ammo runs low and health will be required for those odd occasions in which you can’t find a door to walk through. 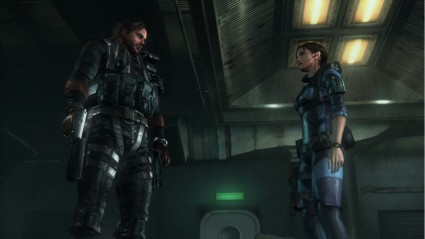 There’s no upgrade to make your A.I. partner not useless.

Some of the items are a little more useful, as you can find upgrades to your weapons. Some offer extra damage, so that invisible life bar drains quicker, others will improve reload speed or increase the chances of stunning an enemy.

There are some puzzles clearly designed with the touch-screen in mind that work okay on the controller. The controls as a whole work fine and translate well from the game’s 3DS origins. What doesn’t translate well is the graphics.

Nautical nightmare
This game is a port. A picture speaks a thousand words but I don’t think I’d get away with just that. Most of the models seem to have been given a few more polygons and some of the textures have been sharpened up apparently, but for the most part, this game looks sub-par.

Blocky environments and a heavy restriction on the number of enemies on screen at once show the game’s roots as a handheld title. It’s not to say that the design of the environments is bad, it’s just that it’s hard to get immersed in a game when I’m noticing some of the lowest resolution textures I’ve seen in a game since the Playstation 1.

Sea sharp
Audio in the game comes in two flavours. Firstly, music and sound effects. They’re fine. Monsters make suitably horrific noises as they stumble about and some of the ambient music tracks add to the feel of the game. In fact some cut-scenes are truly saved thanks to the occasional use of some over the top orchestral pieces.

Secondly, there’s the voice acting. It wouldn’t be a Resident Evil game without some terrible dialogue and delivery, so in that regard Revelations doesn’t disappoint.

All aboard
The game has an interesting multiplayer component. It’s essentially what you’re used to in Resident Evil games by now, and building on the franchise’s use of ‘Mercenary Mode’ is ‘Raid’ mode.

A set of challenge maps task you with getting to a certain checkpoint whilst fighting of monsters either on your own or with friends. Bonuses are earned through good aiming and killing the most monsters. 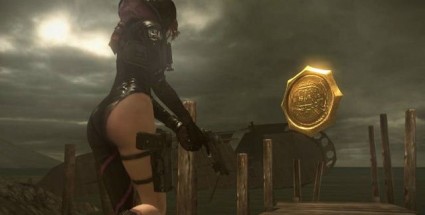 This is what you’re after. Yes, that is a genuine costume from the game.

Like most multiplayer games, you level up and earn new weapons and buffs as you progress.

Overall, it’s a fairly robust offering that falls down due to the fact that the combat is the same tired and disengaging offering that you get in the main campaign.

What isn’t acceptable is porting a 3DS game with such little care or extra content. I initially assumed this game would be a digital title when it was first announced, but to make it a full retail title is way off the mark.

The combat is boring, there’s no tension in the game and it all feels so dated. Perhaps there was something lost in translation here, but I can’t recommend that people play the home console version of this game.