If you read my review of the last set of Alan Wake DLC, ‘The Signal’, you’ll remember that I took some umbrage at how the DLC interfered with the ending of the full game, almost skewering what was in my mind, a massive step up for the games industry in storytelling terms. Soured by that, I was also concerned that Remedy may be looking to clear up what seemed to be a purposely ambiguous ending, aimed at creating interpretation and debate. Since then, it was (surprisingly to me) announced that the second lot of DLC, ‘The Writer’, would be the last for the current game, hinting heavily that Remedy were hoping to start work on a sequel soon. This had eased my mind somewhat; however, did this swan-song instalment cement or dissolve my concerns over the series’ future direction?

Note: If you haven’t finished the full game or The Signal, then I implore you not to read on. This review will have no major spoilers in terms of this episode but may spoil events in the previous DLC.

So, picking up from where The Signal left off, you take control of Alan as he now is once again fully aware of his situation, thanks to the guidance of Thomas Zane after nearly succumbing to the ‘Dark Place’. He finds himself in a familiar position with best friend and agent, Barry, behind a metal fence at the other side of a maze. Barry reminds our hero that although he has a better handle on what’s happening, he’s still in the Dark Place and that things will still very much be different to the real world. With one hand back on this relative reality, Alan finds himself at the advice of Zane once more and to fix everything that’s happened, Alan must strive to find himself; both figuratively and metaphorically.

The story here, much like with The Signal, is a blight on the full game’s ending. For the most part, this narrative simply feels like filler; just more Alan Wake but muddier and unfulfilling throughout. In spite of all that, however, I have to admit that this episode features some thrilling visualisation and does end very strongly, meaning that unlike what had come before in DLC, by the end you don’t have that same feeling of emptiness when the credits roll. My complaints about the DLC strategy being an unnecessary addition to a brilliant storyline still stand; the DLC still lacks purpose and reason. They still cheapen that ending, they still look to clear up some of the most thought-provoking aspects of the original plot, but the way The Writer ends you can at least appreciate the direction in which they’re taking it leading into a sequel. 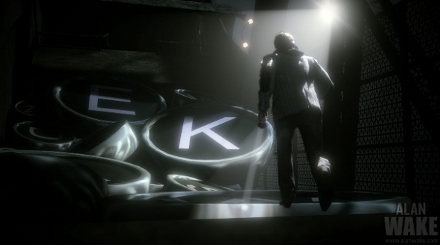 Some smart visualisation can't prevent this episode from disappointing.

The same gameplay that made the full game a joy to experience and left The Signal at least fun to play through is severely tested at times throughout The Writer, with the strangest head scratchers in design choices. I mean, it’s fair to say that Alan Wake features a solid game engine, which has a great feel when used for navigating and shooting. However, when strangely used to shoehorn in a platform segment in a particular stretch, the good ship Wake ploughs directly into the nearest iceberg. It’s an unpleasant, frustrating and baffling section and although mercifully short, it’ll feel more than long enough.

Then you approach the collectable items. In the full game it was manuscripts, in The Signal it was clocks, both of which were well themed around what you were experiencing. In the case of the latter, you were alerted to these by the sound of ticking, which got louder the nearer you got; a subtle touch. In The Writer you are looking out for copies of the ‘Night Springs’ Xbox 360 game, which makes absolutely no sense in the world created by Remedy. It gets worse; you find these thanks to Xbox dashboard noises. This not only instantly obliterates any atmosphere that this IP is known for but also in my case had me thinking my Xbox was on the blink for a couple of minutes, until I’d determined the exact source of the noise.

Then it’ll dawn on you pretty early on that Alan Wake once again makes an over reliance on the overworked mechanic of shining lights at floating words to manifest items or trigger events. In the later stages of the full game, it was a clever and intelligent plot device, in the last DLC its use was stretched out too far. In The Writer I was officially bored to tears by it. 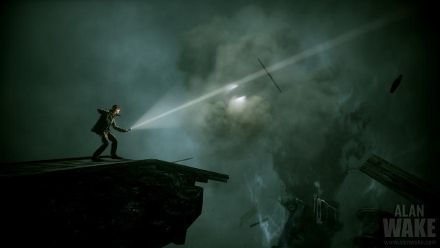 Looks great but this part is about to get frustrating.

Somehow, though, despite all the flaws I found in this episode, it all comes together in a late, intense build-up to a strong end battle and plot finale, which in true Remedy fashion leaves you wanting more.

Once again, I’d have to say that if you’re looking for something that’s essential to the Alan Wake experience, then this DLC will probably leave you unfulfilled and disappointed, though you might still get a kick from how it ends. If, however, you’re just after more of the same gameplay and can look past some of the bizarre choices contained within this outing, The Writer will probably only just about do the job. Sadly, it’s the end of a disappointing duet of DLC that’s soured my opinion on what was one of my favourite games of the year.