After several slightly disappointing DLC packs for Bioshock 2 that included multiplayer maps which no-one uses, and the Protector Trials that was a good idea even if we had already saved all the Little Sisters, it was nice to hear about Minerva’s Den as it was an actual story add on for the game.

Is this the DLC that will salvage Bioshock 2 and all its failings? Don’t get me wrong, I loved the story of Project Delta, his little sister and the evil Sophia Lamb, but it was quite lacklustre in comparison to the terrors that Andrew Ryan & Frank Fontaine inflicted upon us. Sure, there were some new toys for us to play with but it just didn’t feel quite the same and it certainly lacked the twists and turns of its predecessor.

There’s a new bad guy in town this time though who goes by the name of Reed Wahl, a spliced up maniac who has made it his own personal goal in his limited life to protect The Thinker. This intelligent computer that runs the entire city of Rapture was created by Charles Milton Porter and later maintained with the help of his friend and colleague Reed Wahl. Things turn sour between the two and Wahl has Milton tried for treason for misuse of The Thinker when attempting to use it to recreate the personality of his dead wife. With Milton transported to Persephone for an indefinite amount of time, Wahl shuts off Minerva’s Den from the rest of Rapture so he can ensure the safety of The Thinker from all outsiders. 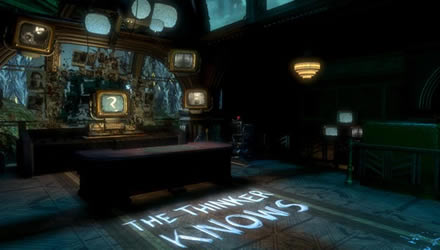 Time passes though and Porter makes his unexpected return from the infamous prison to awaken you, another Alpha Series Big Daddy under the name of Project Sigma. Milton has teamed up with Brigid Tenenbaum, the Little Sister’s creator and saviour, who has also asked for your services in attempting to reach the surface and believes that accessing The Thinker and regaining control of Minerva’s Den is the only way that this will be possible.

Thankfully Minerva’s Den holds a completely new set of locations for you to explore in Rapture Central Computing so as to keep things a little bit fresh but familiar as well. As you would expect with any Bioshock game or add on by now, the story is told through a variety of audio logs that are dotted around the Central Computing chambers along with the radio transmissions from Milton, Wahl & Tenenbaum. There is even the return of a few sea bed exploration tasks with some bonus Adam slugs ripe for the taking.

Naturally because Tenenbaum has made an appearance there are more Little Sisters for you to save from the grasp of those greedy splicers, which means more Adam draining chores to complete. This part of the game I did find to be a little bit monotonous, mostly because I had already saved all the creepy little children in the main story, and also in The Protector Trials. Saving or harvesting really doesn’t appear to make much of a difference as long as you can afford what is new.

In terms of what is new, Minerva’s Den doesn’t deliver too much but what it does provide you with is the rather impressive new plasmid Gravity Well and a powerful new weapon called the Ion Laser. Gravity Well is both very effective and rather humorous at the same time. Deploying this new plasmid into a plethora of enemies will suck them into a self contained whirlwind, leaving you free to fill them with bullets (or take them out with another plasmid) without fear of one sneaking up behind you. When the plasmid is done doing what it does best, all the enemies contained are spat out with a small explosion, littering splicers all over the place in a slightly undignified yet comical manner.

The Ion Laser is the newest weapon to the Bioshock 2 arsenal, but is unfortunately not just specifically for your use. The new Big Daddy model, The Lancer, also has access to this devastatingly powerful weapon, and you will even come across some new security bots that are fitted with the same weaponry to blast a hole through you. This doesn’t mean you don’t stand a chance though. Instead of having Power to the People stations, upgrades for all the weapons you will use are littered around the broken down tunnels of Minerva’s Den, providing higher damage and reload times for those tough Big Daddy & Big Sister battles.

I found that Minerva’s Den was over just as it started to get really exciting. With a plot twist that wasn’t quite on par with Bioshock, it was at the very least more exciting than the tale of Sophia Lamb, but then it just seemed to end prematurely. Despite this, there is a lovely little story hidden here and I would suggest this DLC to anyone who is a big fan of the series, although there won’t be much new here for the casual player.