There are things that go bump in the night, but none of them are as sexy and deadly as Rayne, the sexy-yet-deadly dhampir who made her debut on consoles and PC in 2002. She has since led a quiet existence, ‘thanks’ in part to some truly awful movies that sent her rising star crashing down. She is now ready for a comeback, by way of a 2D hack-and-slash extravaganza.

Father issues
Being a dhampir (half-human, half-vampire) has it’s perks, as Rayne is gifted with super-human strength and agility. This makes her a formidable foe, so it’s a good thing she is on our side. She works for the Brimstone Society, a secret organisation that is sworn to protect mankind from all of the evil that lurks in the dead of night. Together with a small group of soldiers, Rayne is sent in search of a mysterious castle to put an end to an especially evil kind of evil: her own father! As so often happens, the soldiers quickly meet a harrowing end, leaving Rayne to her own devices.

Death by a thousand cuts
By ‘devices’, I mean her two wrist-mounted swords and her high-calibre gun. These allow her to hack, slash, shoot and otherwise dismember her way through her enemies, as she makes her way deeper and deeper into the castle for the ultimate showdown with daddy-dearest. Rayne can perform a wide variety of moves and jumps, and your success, not to mention your survival, depends on you mastering these. Enemies come fast and furious and include everything from sharply-dressed vampires and big toxic frogs, to monsters of all shapes and sizes; all pose quite the threat.

For instance, vampires attack with swords and guns just like Rayne, but unlike Rayne, their attacks are quite powerful. Even a single cut from their swords can knock her off her feet, while they in-turn can take several beatings before tumbling to the ground. Luckily, Rayne can give back as good as she gets, by stringing together different attack combos. Done correctly, Rayne can slash her way through all foes on the screen without them ever touching her.

However, for this to work you need to have a firm grip on the controls, and that is not as easy as it sounds. One button for hacking and slashing, one for jumping and one for shooting is an easy control-scheme to grasp, but it’s marred by a lack of responsiveness. She can be way too sluggish to turn around, which is a big problem when enemies attack from behind. Performing somersaults to get to otherwise out-of-reach places, or to simply get out of danger, is a particularly fiddly affair and can be the cause of some unfair deaths. 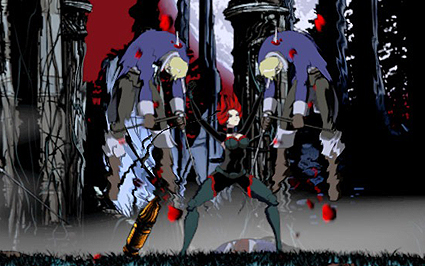 Rayne's different approach to 'bench presses' did not sit well with the boys.

Luckily, the game is quite forgiving when it comes to checkpoints. These come in the form of blood-fountains scattered throughout the level at strategically convenient places. Sadly, though, you can’t save your progress at these fountains and then come back to the game later. You have to complete the whole level before your game is saved, so you either have to finish or come back and start the level all over again. The annoyance of this is off-set slightly by Rayne’s ability to replenish her energy by drinking the blood of her enemies. This is a very useful feature because enemies are plentiful, and feeding on just a few pale necks can quickly restore Rayne to full health, keeping you in the action for longer.

Sadly, the controls get in the way again, as Rayne first has to stun an enemy, then grab them and then suck them dry. This is quite the combo to master in the heat of battle, made more tricky by the fact that enemies have a tendency to crowd around Rayne. This means that more often than not, she will miss the intended stunned victim, grab another enemy and suffer a painful knock-back for her troubles. Luckily, while quenching her blood-thirst she becomes momentarily untouchable, so the game is actually forgiving enough from time to time. Other cool tricks involve a speedy dash to quickly get out of the way and the ability to turn into a raven at certain key points.

A particular nasty trick is poisoning enemies. This turns them into walking bombs that Rayne can detonate at will, thereby quickly turning the odds in her favour again. There are also various environmental hazards like spinning saw-blades, bombs and the likes, that Rayne can make work to her advantage by throwing enemies into them. However, all of this can be quite a feat to pull off in the heat of battle, and again the sloppy and unresponsive controls are to blame. Adding to the frustration is the fact that Rayne’s animations cannot be interrupted, which is very unhelpful when the screen is swarmed with enemies but she is already busy stomping on a downed opponent.

The control issues are problematic enough in combat, but they become almost unbearable during the game’s platforming sections. These often require Rayne to land on small platforms, or quickly jump or dash out of the way of falling spikes and other traps. Missing that vital bit of safe ground happens all too often, resulting in a lot of cheap deaths. This is rather agonising, because all of this could so easily have been avoided, had the developers spent more time fine-tuning the controls.

Blood by the bucket-loads
BloodRayne: Betrayal has a rather old-school feel, thanks in part to it’s 2D-graphics. I mean that in a good way, because the game is a clear throwback to the Castlevania series. The backgrounds have a peculiar dated look to them, and the colour-palette is limited to dark colours which complement the look.

The characters are much more modern in appearance and sport a lush anime style, with some very fluid and impressive animations that serve the brutality of the on-screen carnage well. Everything is very much over-the-top, from the way Rayne runs, to how much enemies bleed when you slash them into bits (we are talking blood-sprays by the bucket-load here!), but it never feels out of place. In fact, you will experience a few ‘wow’ moments when everything comes together, serving up a proper bloody feast for the eyes.

Symphony of carnage
The graphical carnage spills nicely into your speakers, thanks to the game’s up-tempo soundtrack, featuring gothic speed-metal that fits the mod perfectly. This falls perfectly in tune with the many grunts, screams and death-rattles from the slain enemies who fall victim to the ‘swoosh’ of Rayne’s swords. The game has no recorded dialogue; instead, dialogue is presented via speech bubbles that do feature the occasional funny quip, but are otherwise quite forgettable. They fit the overall comic-book-style of the graphics quite well, though. 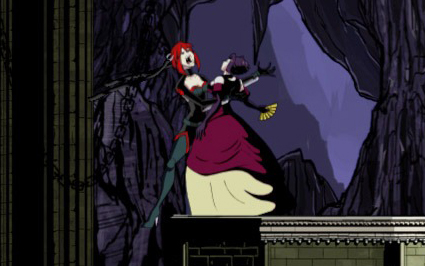 "My word, Rayne! What big pointy teeth you have!"

Bloody difficult!
BloodRayne: Betrayal is a game that proudly wears its inspiration on its sleeves. It’s a loving homage to the Castlevania games, and it’s proud to admit so. The Castlevania games were, and still are, amongst the most notoriously difficult platform games around, and BloodRayne: Betrayal aspires to continue that legacy. As a result, it’s a seriously challenging game.

There is nothing wrong with that, because its very nature dictates that this can’t be a game you simply breeze through with minimal effort. On the other hand, it’s not fair for a game to punish its players because of its own inadequacies, but that is exactly what BloodRayne: Betrayal does from time to time. Don’t get me wrong; when the game mechanics come together, they come together nicely, but those bright moments are brief and all too often eclipsed by dark periods of frustration.

BloodRayne: Betrayal is an intentionally difficult game by design, made brutally difficult unintentionally by its controls. This creates frustration where there shouldn’t be any, and some will loathe the game because of this. On the other hand, the sluggish controls don’t render the game unplayable. Those who can look beyond its shortcomings and push past the pain of agonising defeat might, therefore, actually end up liking it. Some might even grow to love it, simply because of the joy you feel when overcoming a particularly difficult section of the game, of which there are many.

Players who have a special affinity for the old Castlevania series, or just challenging platformers in general, would be well advised to set up a first date with Rayne; others, however, should take a much more cautious approach. Just be prepared to put a lot of effort into the relationship to make it work.