For a small developer, Popcap have themselves something of a big reputation, well known for making highly addictive little puzzlers that are suitable for gamers of all ages and types. Personally, I’ve not had too much experience with a lot of their work despite hearing good things, but I have had the pleasure of being one of many recovering Peggle-aholics after it hit the Xbox Live Arcade. Being completely honest, the last game I would have chosen to sample from their ever growing catalogue would have been Bookworm Adventures, mostly put off by its child-friendly graphical styling, which made it look more educational than fun. Popcap, however, kindly offered us the chance to sample the follow up and I have to say I found myself pleasantly surprised at a game that oddly sits somewhere between turn-based RPG and Scrabble…

Obviously, as a more of a puzzler than anything else, games like this aren’t expected to have much of storyline, but there is a loose one that binds the spelling-based tomfoolery together. Lex, a bespectacled young bookworm, wakes up for breakfast in the library of his residence, only to be interrupted by a wolf in hot pursuit of Old Mother Goose, who have just escaped the confines of a book of nursery rhymes. After giving chase, Lex decides that he wants to know just what is going on, and follows the old bird into one of the book, in which he has to do battle with the protagonists in each story to find out.

As you can tell, this is a very much a family friendly affair. There’s nothing deep or complicated to follow, but it does make up for it with an innocent charm that you’ll have seen in other Popcap games. You know, the inoffensive, colourful kind of charm, with cutesy characters galore that make you think of rainbows, kittens and lollipops… sickening isn’t it?

If Scrabble was a JRPG…
Having gone into this game expecting it to simply feature a letter grid and a timer, I have to admit to being pretty surprised when I discovered that Bookworm Adventures Vol 2 has far more in common a turn-based RPG than it does your typical word game.

There are three ‘books’ in which Lex will enter, each with ten chapters. Upon entering a chapter, our hero starts on the left hand side of a map and must defeat all the enemies in turn-based combat until he reaches and defeats the boss on the right. To help Lex attack the enemies, you must spell a word from the 4×4 letter grid located smack bang in the middle of the screen, at which point Lex will unleash his attack. The attacks can range in power and damage thanks to a couple of variants such as word length or the letters you use; just like scrabble. Hit a word over five letters long you’ll gifted with a powered up tile in the grid; use that particular tile in a subsequent word and dependant on the tile’s power-up, you can give the enemies ailments such as poison effects, or simply add more power to an attack. Every so often you’ll be left with a situation where you can’t spell anything with the tiles provided, luckily you have a scramble button, which will give you a new selection of letters, albeit at the expense of a turn.

Likewise, enemies can also hinder Lex by bestowing ailments on him, stunning him so he misses a turn, locking down certain tiles for a number of turns or simply making them useless. Thankfully Lex can acquire some weapons to add to his arsenal, and these are earned in a number of ways. By defeating enemies, sometimes you’ll gain power-ups that can be used at any time and don’t affect your turn, such as health potions, an attack boost and a potion that will clear any ailments. You can also gain a number of passive power-ups, and these are earned by finishing a level and beating a boss. After you’ve unlocked a couple of these you can only use two at any one time, so you’ll be forced to choose before each level. By winning the minor battles along the way, you can level up, which will grant you more abilities such such as extra heart containers or damage multipliers. 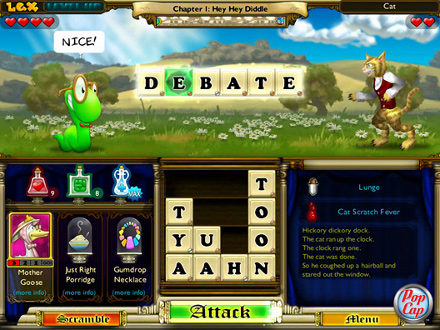 Also, over the course of the game, Lex will seek help from certain characters, and you’ll gain allies to take into combat with you. You can only take one of these guys into a given level, but they provide some pretty helpful benefits. Mother Goose, for example, will lay a new health potion every four turns, or the Cheshire Cat from Alice in Wonderland, who purifies Lex every few turns.

In-between entering a chapter on the map screen you’ll occasionally be able to visit Moxie, a returning character from the previous game, and you can compete against her in mini-games to win potions and power-ups. These games are very basic, but a nice little aside from the normal combat system. The newest mode here is ‘Word Up’. You are presented with a hill and figures representing Moxie and Lex, and quickly spelling words out of the random selection of tiles will see your character’s representation move quicker up the hill. Providing you get enough words in, you can still earn power-ups from these games even if you lose.

So, as you can probably see, the comparisons to battle systems of a JRPG are more than justified, more importantly; it’s a lot of fun, but only in small doses. Bookworm Adventures 2 can get pretty old after extended play time, especially when playing through most of the opening ‘book’ where the battles for most part are so ridiculously easy, lacking any kind of strategy or thought outside of the gamers ability to spell. It does get harder as the game goes on, especially as you encounter enemies and bosses with new powers, meaning you have to rethink your strategy and give thought on what items you might take into a level with you. As far as battle systems go, compared to major RPG’s on the market it’s pretty light, but it’s a solid system that is flawlessly executed; it’s fun and fits the audience it wants to reach. 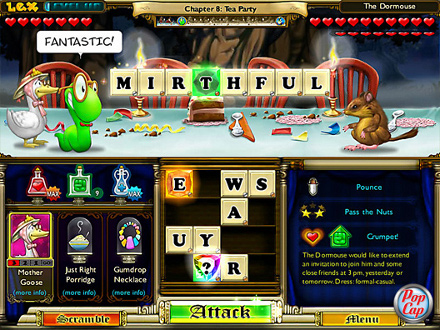 Yes, some of the humour is mirthful!

Misleading graphics
Somewhat shallowly on my part, the preconceptions I had about the series were largely down to how the game is presented. At first glance the presentation in both the marketing and its general look screams ‘edutainment’, and that’s really not what Popcap have created. Of course, the game encourages good knowledge of the English Language, and as such, people who can’t spell probably won’t enjoy the game all that much…

In gameplay everything looks nice; the actual animations in the battles have a lot of character and are designed nicely, however it’s done is a very crudely and exaggerated way, somewhat reminiscent of the work of ‘Rather Good’ creator Joel Veitch. Maybe I’m looking too deeply, but there’s almost a sinister and dark underlying tone hidden amongst the rainbow coloured cuteness, especially in the Nursery Rhyme levels.

Light-hearted melodies
The audio is the hardest part of Bookworm Adventures to sell. If you’ve played Peggle, you’ll be quite familiar with the types of light string harmonies that resonate within Lex’s world. Lex on the other hand is voiced fairly atrociously, showing off his dire vocal range that’s as annoying as listening to Orville after he’s gargled down a mixture of helium and sandpaper. Thankfully his audible input is restricted to the menu systems, which means his voice doesn’t grate when you actually get into the nitty-gritty of the game. That’s it really, there’s no awesome theme tunes or witty dialogue to de-construct; just a floaty backing track where occasionally a bit of an annoying wazzock will talk over the top of it.

Knowing how to spell is fun!
Personal surprise factor aside, Bookworm Adventures Vol 2 is a decent little package that lacks the pure magic that made games like Peggle so addictive. Fans of the original (and word games in general) will probably find a lot of enjoyment in this game, and it’s at least worth a look for the JRPG-heads amongst us. That said, I feel most people should be wary of the £15 price tag before taking the plunge; it’s not a must own killer app, but certainly worth the time spent to download the trial to decide whether it’s for you before handing over your money.