Call of Duty: Modern Warfare 2 sparked controversy for a number of reasons, one of the main reasons being Activision’s rather steep pricing for its numerous map packs. A decade ago, new first person shooter maps on PC were added by the developers as a free gratuity to the community, or created by dedicated modders. It came as no surprise, therefore, that many gamers uttered a sharp intake of breath at the sight of the Stimulus Map Pack on the Xbox Live Marketplace for a hefty 1200 Microsoft Points, or £9.99.

What made this questionable ‘deal’ even less inviting was that only five maps were included, and two of these were simply recycled from the previous Modern Warfare game. Nonetheless, eager Codders bought the DLC in droves, along with the subsequent map packs for the title. Fast-forward to today and Call of Duty: Black Ops has just received the first map pack of its own, rather appropriately named the ‘First Strike’ pack. Pricing is once again set at 1200 MSP, so the question on everyone’s lips is if the package is worth its premium price this time round (unless you’re one of the really dedicated fans/mugs who would buy it regardless).

For your (modern war)fare, First Strike provides the arenas Berlin Wall, Stadium, Kowloon, Discovery and Ascension, a Zombies map, to noob tube, camp and knife around in to your heart’s content. What is certainly welcome after the lazy habits of its predecessors is that all five maps are brand new, original creations with no remakes. A new playlist has been put in place exclusively for First Strike, and I have to admit that since obtaining the map pack I haven’t actually selected anything other when matchmaking. 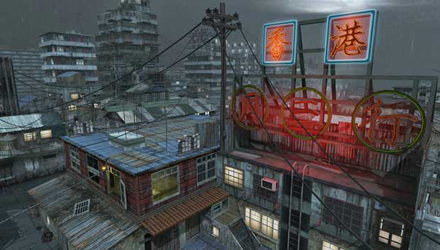 All four normal multiplayer maps have several things in common. Firstly, most of them have a certain interactive aspect to the level; Berlin Wall has a no man’s land with automatic machine guns that fire at anyone reckless enough to step into it; Kowloon has zip wires to let you traverse quickly across the map, and Discovery contains structures that can be destroyed, like a bridge in the middle. All of these elements could be labelled as gimmicks, but it’s nice to have some more interactivity in Call of Duty, when other first person shooters like Battlefield: Bad Company 2 and Breach have heavily destructible environments. I’d personally like Treyarch and whatever’s left of Infinity Ward to take this further in subsequent map packs and Call of Duty games.

Another similarity is that they are all fairly accommodating to sniping, something I’m usually quite rubbish at in Call of Duty thanks to their shoe-box sized levels. Those on offer in the First Strike pack aren’t generally much bigger than usual, but have some tempting spots for scopers to lurk in and get a good view of the battlefield, all possessing a lot of upper story windows and some handy platforms up high. Thankfully, none are like the arguably dire Wasteland of Modern Warfare 2 that didn’t let you stand a chance of doing anything other than sniping, unless you wanted to camp in one little room and hold a tea party all match long.

Despite these few likenesses between the maps, all of them are strikingly different in both aesthetics and feel. Berlin Wall puts you on the snowy, rubble-strewn streets of Germany, Kowloon in the murky Hong Kong city of Shangai at night, Discovery in an old military base at the Antarctic, and Stadium around a… well, stadium. The latter is definitely the blandest in appearance, comprising of a lot of grey and yellow brick and concrete. 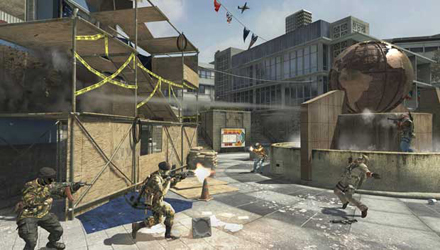 Better liven the place up with a few splashes of red, ay?

Berlin Wall is an interesting offering, allowing combat down on the streets using vehicles and walls for cover, or sticking to the sniper nests in buildings. I personally don’t get caught out much by the automatic machine gun, so thankfully its presence isn’t too irritating or intrusive. The map’s layout can be described as a wonky rectangle, for want of a better term, with a risky crossing in the middle between both sides. There is a lot of potential risk to your cranium when staying out in the open too long, so weaving in and out of cover is a must.

Berlin Wall is one of my favourites, but perhaps my pick of the bunch is Kowloon, an arena I didn’t initially expect to like that much. Its murky appearance put me off at first, but after a short period you discover a fascinating labyrinth of a level that you will probably get hopelessly lost in, but damn well enjoy yourself whilst doing so. You seriously need to watch your back, as snipers and round-the-corner-lurkers could be anywhere, and the zip wires are great fun but certainly leave you vulnerable whilst you’re sliding down. Overall, Kowloon provides the frantic gameplay we come to expect from Call of Duty, without going over the top like Nuketown, or Shipment from Modern Warfare 1 (although those are damn fun in their own right).

Discovery is also a satisfying and compelling map that lends itself well to objective-based game types. To be honest, all in the pack convert reasonably well to different modes, but Discovery in particular can have some nail-biting Domination moments. A gorgeous representation of the Southern Lights can be seen in the skies, but don’t stare at it for too long, otherwise you’ll soon be facedown in the snow instead. The few destructible elements are a nice touch, although it just makes me wish that the game had more of them. I don’t know, maybe I’m just a vandal at heart. 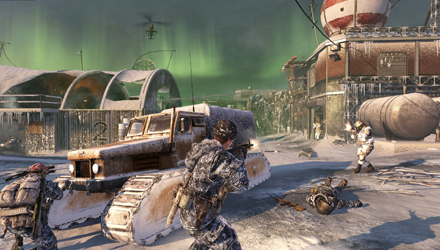 If only the snowtruck was interactive too...

Stadium is probably my least favourite of the lot, but that isn’t to say it’s not a decent contender nonetheless. It’s without a doubt the least visually exciting, but there’s plenty of fast-paced close combat to be found. There are also a decent amount of sniper spots once again, but even these aren’t safe, especially not along the curved windows of the stadium itself, comprised of a walkway that the predatory love to run back and forth across, looking for easy prey. One of the biggest disappointments for me is that the actual ice hockey rink is tantalisingly in sight, but totally inaccessible. Boo! Hiss!

If I’m honest, I’m not the biggest fan of the Zombies mode. There are many that enjoy the zany breath of fresh air on offer though, which is totally understandable. With that in mind then, Ascension is a great addition to the mode, with Treyarch really going all-out to create an unforgettable experience, for better or worse. The level starts in black and white, transferring to Technicolor once some progress is made. Overall, if there’s anything you’ve heard about this map, it’s probably the zombie space monkeys, and there is plenty more craziness where that came from, like exploding Matryoshka doll grenades and the black-hole-generating Gersch Device. 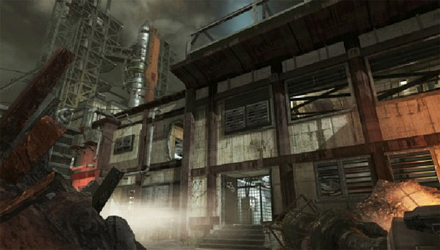 Zombies in MY creepy abandoned spaceport?

The maps included in the First Strike pack are actually so good, they physically wipe the floor with the majority included as standard with Black Ops. To be fair, this is helped by the fact that half of the default offering are mediocre at best, but that does not take away from the fact that there are some very strong levels in this map pack.

There’s still no escaping the elephant in the room that First Strike will set you back ten pounds for a mere collection of maps, when you can easily acquire some incredible full retail games for the same amount, that have dropped in price since release. If you could never justify spending this much on DLC of this nature, then First Strike will not change your mind. Call of Duty enthusiasts and those sitting on the fence, however, should not think twice about making the purchase.